Council chose its preferred design in a split decision
Nov 13, 2019 6:13 AM By: Steven Chua / Squamish Chief 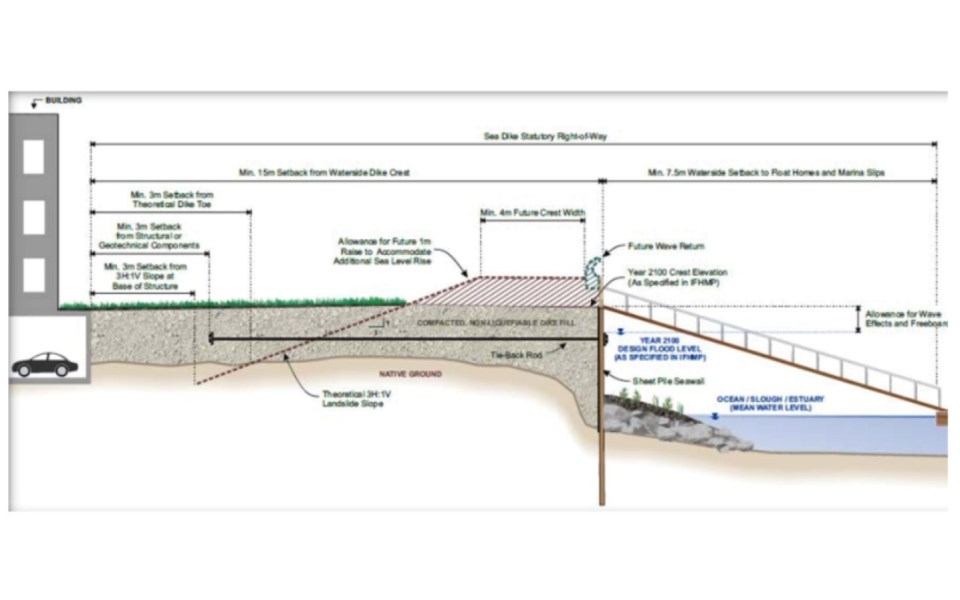 Design and permitting will soon start for a $5 million sea dike at Xwu'nekw Park, which is the home of the canoe shelter bearing its name.

At their Nov. 12 meeting, District of Squamish council chose what type of dike will be put in the area, which borders the yacht club to the south and the Sirocco development to the north.

In a split 5-2 vote, elected officials opted for creating a sheet pile at the high-water mark, which was what staff recommended.

Sheet piles are long sections of wall, usually made of sheet metal, that interlock to hold back soil or, as in this case, water.

Coun. Doug Race and Coun. Chris Pettingill were the two members of council who were opposed.

Race was in favour of a different design, which would've created a sheet pile at the Sirocco alignment, which is eight metres beyond the high-water mark.

This would've been more costly, but would've freed up the most land.

David Roulston, manager of municipal infrastructure, estimated this option would cost an extra $500,000 to $1 million.

Race argued that given the extra price, it would've been worth it.

"I think that at that particular point the land area is more valuable than the watered area, and we could afford to come a little bit out into our water lot to gain land," he said. "We only get one shot at this."

"To me, I equally value the water space as well as the land space," said Coun. Jenna Stoner, who supported the majority decision.

There was initially some talk about using a sloped dike instead of sheet pile.

Mayor Karen Elliott thought it may allow for easier access to the water, but Roulston said that it would be significantly steeper than the Stawamus Chief trail and filled with sharp rocks.

This would not make it an ideal place for people to launch their canoes or paddleboards from, he said.

For a sloped dike to be gradual enough to work, it would have to be extended until it practically hit the other side of the Mamquam Blind Channel, Roulston said.

Neglected pets seized from B.C. home were abandoned at start of pandemic
Aug 9, 2020 5:58 PM
Kamloops boat crash sends 2 passengers to hospital, police investigating
Aug 9, 2020 4:54 PM
Comments
We welcome your feedback and encourage you to share your thoughts. We ask that you be respectful of others and their points of view, refrain from personal attacks and stay on topic. To learn about our commenting policies and how we moderate, please read our Community Guidelines.