You can use this interactive map to see how much snow is falling in B.C.

B.C. Government tool allows users to find out how much snow an area has received historically and in near real time
Dec 3, 2019 2:20 AM By: Elisia Seeber / Vancouver is Awesome 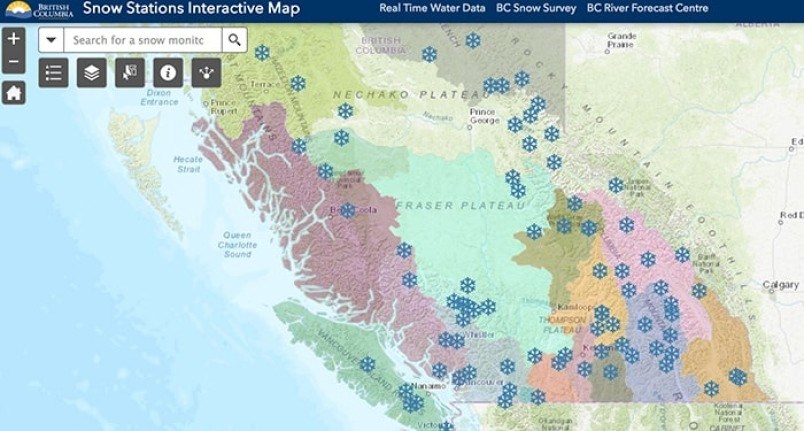 Want to know if there’s less snow falling this year compared to past years in British Columbia? Finding out is "snow" problem at all.

The B.C. Government has released a handy tool that allows users to find out how much snow an area has received historically and in near real time.

The Snow Stations Interactive Map allows viewers to click on little snowflakes that provide the exact location of a monitoring station, the area’s elevation and links to snow accumulation graphs and downloadable data.

The fun map gives the public access to information collected by the Provincial Snow Survey network and partner organizations.

The government says the snow data is collected and transmitted hourly using the data collection system on geostationary satellites, which are operated by the National Oceanic and Atmospheric Administration.

“Current-year, near-real-time hourly data for the previous seven days, and graphs of snow-water equivalent from Oct. 1 to the end of the snow season (typically late June), are updated daily.”

You can also search for a snow station by name or ID number on the map.

This story was originally published by Vancouver is Awesome. Read it here.