A case for old-growth forests

Taking a scientific view of how much to save and exactly where to save trees
Oct 22, 2012 4:30 AM By: Andrew Mitchell 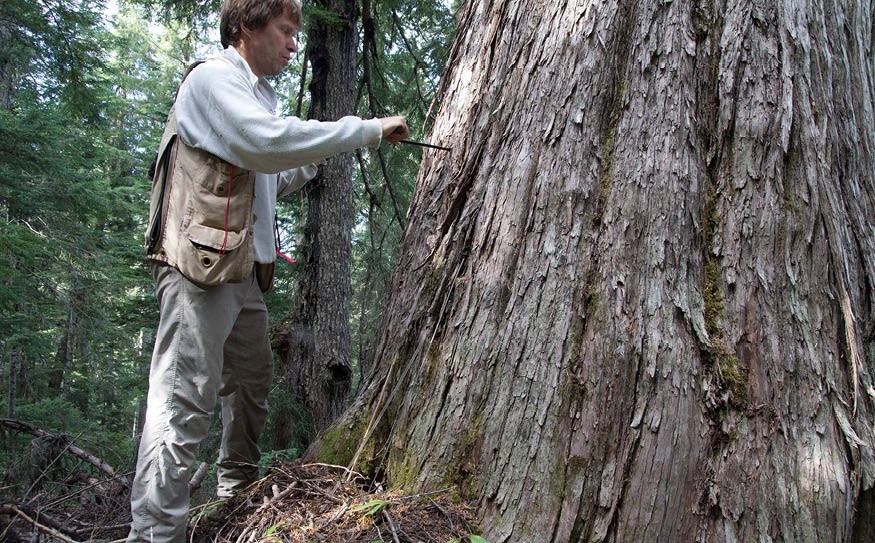 SUPER CEDAR Biologist Bob Brett discovered a cedar tree in the Callaghan Valley that is believed to be more than 1,000 years in age. Photo suBmitted

About 40 people turned out to the Monday morning session of the Association of Whistler Area Residents for the Environment (AWARE) symposium on old-growth forests on Oct. 15, with presenters and audience members running the gamut from loggers to scientists to conservationists.

While that once might have sounded like the setup for a loud debate on forestry — like the confrontations over forests at Clayoquot Sound and the Elaho in the late 1990s/early 2000s — the tone has changed to one of mutual respect and accommodation between groups. Both sides agree on the need to base decisions on science rather than emotions, and the realization that both timber harvesting and conservation have a place in B.C. and in the Whistler region.

As well as looking at the important, and often subtle contributions that old-growth forests make as a provider of habitat, biomass, carbon storage and ecological diversity, the AWARE symposium also looked at the question of how much old growth needs to be preserved in a given area before those values are lost.

"Back in 1981, 1982 we were all operating on the assumption that all the old growth would be gone by now, and replaced with a few thrifty species of second-growth trees," said Whistler biologist Bob Brett, who presented the results of his ongoing research on tree dating on Monday. "Now, we all agree that some (old growth) should be protected, though we don't always agree on how much."

With a grant from the Community Foundation of Whistler, Brett recently did a study of core samples in the Callaghan Valley on behalf of AWARE to determine the age of the trees there. One yellow cedar in the Hanging Creek area provided a sample with 1,017 rings. Given that the centre of the tree was rotted out, Brett estimates that the tree is at least 100 to 200 years older than that — and possibly as old as 1,500 years based on comparisons in diameter to other trees — making it the oldest living tree recorded in the Whistler area.

That tree is located on the edge of another cut block, in an area that is one day slated to be logged by the Cheakamus Community Forest (CCF). According to Brett, the stand that tree is in is classified as being between 149 and 250 years, and therefore would not be considered old growth. Brett said the find underlines the need to have more accurate mapping and classification systems for forests — as well as the fact that Callaghan forests are far older than previously thought.

The CCF is a partnership of the Resort Municipality of Whistler and local First Nations that was established in 2009 to give the partners more control over logging on Crown land in the area. Under the agreement, the CCF has to log roughly 40 hectares per year (averaged out over a five-year period) or risk losing the tenure.

Brett's ancient tree underlined one of the central themes of the symposium, that current timber harvesting and forest management guidelines don't define old growth very well or ensure diversity for what's left. For example, any forest with trees aged 250 and older is considered old growth under various acts, but that definition doesn't distinguish between types of forests or age differences past the 250-year mark that might require special attention — and currently most of the wood logged in the province is old-growth as second-growth forests continue to grow.

Brett and other members of the symposium pointed out that there should be more classifications made to distinguish between older forests.

"When it came to the Ancient Cedars (in the Soo Valley), the predecessor of the Western Canadian Wilderness Committee published a 1998 tract on why the Ancient Cedars shouldn't be logged for shakes and shingles because a lot of the trees were likely over 1,000 years," said Brett, adding that the 37 cores indicated that many of the trees were over 1,000 years. However, as far as the provincial definition is concerned there's no difference between those cedars and trees in another area that may be just over 250 years old.

Ken Lertzman, a forest ecology professor at Simon Fraser University's School of Resource and Environmental Management, provided a look at how old-growth forests form. All forests start with some kind of disturbance; typically fire and logging, but some are the result of floods, volcanoes, landslides and other occurrences. It's rarely a blank slate, however, as usually a few species will survive in protected pockets to kick-start the next forest.

"For the most part there is always something left over," he said.

Studying how forests re-establish themselves is the key to managing working forests where old-growth is harvested. "What do we want to leave behind when logging has happened to enhance the ability of that ecosystem to recover?" he asked.

It takes a number of steps dating back to the original disturbance to evolve into an old-growth forest, and Lertzman said that timber harvesters are looking at ways to cut the number of steps in half by skipping some of those steps. That means changing the way we harvest timber to ensure that most of the components for seeding a new old growth forest are left behind when the logs are removed.

That variety of density, tree ages, tree species and other factors makes it possible for old-growth forests to provide habitat for different species — notably at risk species like spotted owls and marbled murrelets, and species like coho salmon that spend the first year of their lives in waterways that weave through forests.

Andy MacKinnon, a research ecologist who was consulted for the Cheakamus Community Forest, as well as on every major forest conservation effort of the past few decades including Clayoquot Sound and the Great Bear Rainforest, said community forests are the key to changing the way British Columbians look at forests.

"I personally think the development of community forests over the last 15 years or so is absolutely one of the best things that the forest service has done in that time," he said. "That and ecosystem-based management (EBM).

"I consider a lot of management of forests over a lot of B.C. to be good, but not inspiring," he added. "With some ideas around ecosystem-based management, people are starting to think more carefully about what exactly it is that people want to get out of their forests and how to manage the forests. Peter (Ackhurst) talked about the obligation of meeting the legislation (by making the Annual Allowable Cut), and that's true, but if you use ecosystem-based management you're going beyond what's required by the legislation. It's very exciting."

MacKinnon agrees that the definitions of old-growth forest are inadequate. "There is a real difference between a forest that's 251 years old and a forest that's been there for thousands of years," he said. As well, he said there needs to be more distinctions made between different types of forests at all levels, as well as the functions they serve. For example, he pointed to one survey that suggests that the habitat potential of an ecosystem is relatively unaffected when 30 per cent of the area is logged or disturbed; however, if 70 per cent or more of the land base is impacted then many species are put at risk.

"It's important to understand what a landscape looked like before people started developing it, how much has changed and how much is appropriate to change," he said.

Peter Ackhurst, chair of the CCF, acknowledged that the group was harvesting old-growth because there are no alternatives when it comes to meeting provincial requirements. However, he said they were working to balance other values as well, including conservation.

"We have small amounts of second growth and a large amount of old-growth, 250 years plus," he said. The CCF is just over 33,000 hectares, of which 10,948 is protected or developed by the province. Almost 10,000 more hectares are developed land, waterways or riparian zones, high alpine, etc. and can't otherwise be logged. In other words 61 per cent of the total is not available for timber harvesting, while the CCF is working to reach a consensus with the community on the remaining 39 per cent.

In addition, the CCF is preparing to unveil its own ecosystem-based management plan, which will be presented on Oct. 25 at the Whistler Passive House. The public is invited to come out and see the plan, which includes a bid to sell carbon credits for protected lands, and make comments.

"It's a learning process and we're learning as we go," said Ackhurst. "It's not the end, it's a continuing discussion we're going to be having, and that's happening all over the province."