A feat of engineering 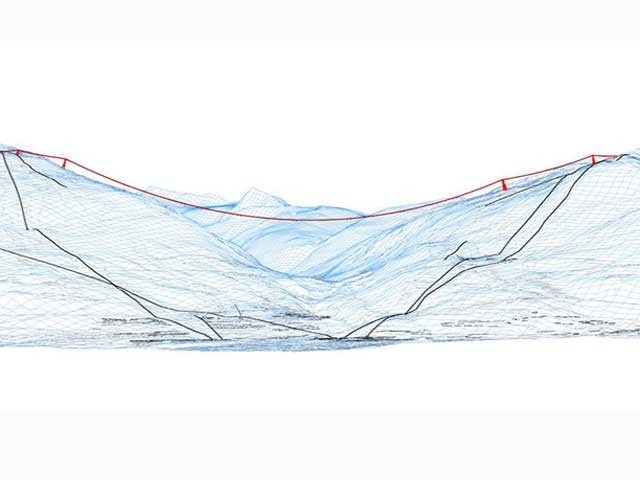 The diameter and the length of the cables, the span between the centre towers, the combined weight of the cables, cabins and passengers. Stripped down to its nuts and bolts, there’s no question that the Peak 2 Peak Gondola is a feat of modern engineering.

When it opens on Friday, Dec. 12, the lift connecting the low alpine areas of Whistler and Blackcomb will set several records, like the longest span between lift towers — 3.024 kilometres — and the longest distance to the ground with gondola cabins more than 436 metres above Fitzsimmons Creek. A trip from station to station will take around 11 minutes.

Peak 2 Peak was built for several reasons, which continue to evolve as Whistler-Blackcomb realizes other ways the lift can be used.

“We felt that a connection of the mountains in the alpine was good for a couple of significant reasons,” said Doug Forseth, senior vice president of operations. “Starting with giving guests the ability to use the best part of the mountains easily without the download or ski-out scenario that involves skiing down and taking lift rides back up.

“When conditions are good that’s not a bad way to go, you get to ski down and get 4,000 vertical feet from the Roundhouse to the valley floor, and we have a couple of good ski-outs to make that interesting. But at this time of the year, or late season when the conditions aren’t as good, it’s not as much fun. Now, it’s an 11-minute trip back and forth to enjoy the best of both mountains.

“Also,” said Forseth, “Summer operations were a big part of the reason. It will enhance the summer sightseeing immensely and allow us to open Blackcomb again in the summer time. It expands options for people hiking and spreads them out over the alpine areas. People not as physically active will get views and perspectives they wouldn’t see from the Roundhouse.”

Those were the main reasons at the beginning, when the idea was first being discussed seriously about eight years ago. Over time the reasons have gotten a lot more specific, as people have pointed out ways that the gondola will benefit the resort. Everything from the expected impact of global warming on snow pack at lower elevations to the impact on traffic from the village on Sunday afternoons was taken into account.

“Our previous records show that about 12 per cent of people on any given day will ski both mountains, which is not a large number and it’s a testament to the fact that it’s not as easy to do,” said Forseth. “This way we’ll get a lot more crossover traffic, balance the utilization of the mountains, restaurant seats, on-mountain experiences. You’ll be able to easily access the Crystal Hut from Dusty’s, or if you’re on the south side of Whistler, coming up for the weekend, the fastest way to get up Blackcomb is to park at Creekside, take the gondola, Red chair and Peak 2 Peak. That will be better for traffic at the end of the day. The reasons go on and on.”

Resorts around the world are also working to attract new skiers and snowboarders as a generation of baby boomers gets older and skis less. The Peak 2 Peak will improve the variety of trails and experiences for new skiers and boarders.

“Blackcomb is challenged with beginner trails,” said Forseth. “There is a solid network of intermediate trails that are workable, but for people coming out of hotels in the upper village there are only a couple of runs on the upper mountain that are practical — after that it gets a little more challenging, unless you’re on the Lower Mountain and sometimes the snow doesn’t make for the best experience.

“People can learn at the base of Blackcomb, head up the Wizard and Solar to the Peak 2 Peak and try the Ego Bowl area and the runs on the Emerald Chair. There’s a progression there between mountains that wasn’t possible before.

“And we’re continuing to find reasons for the Peak 2 Peak, while there are probably things we haven’t thought of yet on this journey and we won’t know until we see how people are utilizing the lift. People could be chasing sunshine or more open terrain — if we have a delay on one mountain for whatever reason, say a dud avalanche bomb that keeps people waiting for a long time, they’ll be able to cross over and keep skiing until the issue is resolved.”

With a price tag of $51 million, Whistler-Blackcomb also timed the construction of the Peak 2 Peak to coincide with the Olympic buzz around Whistler. The result has been the ski industry’s biggest story this season, and maybe its biggest story in years. News outlets around the world have picked up the story, some while covering the buildup to 2010, and have run with it.

That, in turn, has resulted in strong bookings for the resort for this time of year, and many hotels selling out their inventory through the weekend. The snow in the forecast probably helped, as well as the fact that Whistler-Blackcomb has more terrain open than other resorts in the region. But Forseth believes that much of the interest is directly related to the Peak 2 Peak gondola.

“I don’t think that there’s anything close to this as far as an industry story for the ski business, and it’s a remarkable piece,” he said. “It’s not a regular lift, it’s one-of-a-kind in North America, and there are only three other lifts out there using this technology — and this is the biggest of them all. There are a number of vantage points that are attracting people to this story, and there has been a huge uptake and demand for stories about building it, installing the ropes… and then getting the lift to run.

“There’s no question that this is a challenging time, the world is in chaos financially and people are definitely changing their patterns… But we know that skiers still want to go skiing. They may change their patterns a little and not stay as long or ski as much when they get here, but history shows that people will still attend to their needs of skiing and sliding. And we think that if they’re going to do that, then it helps to have a story like this that cuts through the clutter.

“If people are making a decision, go here or go there, we believe this is going to be the tiebreaker. We’re fortunate to have the Olympics and two good reasons for people to visit. We couldn’t be better positioned in this time with products that are special and unique.”

The Peak 2 Peak will also be the gift that keeps giving as more and more media come to Whistler before, during and after the 2010 Games. The Discovery Channel, for example, is doing an hour-long feature on the gondola that will air in the first quarter of 2009.

But for all that the Peak 2 Peak brings to the table, one of the biggest attractions for a lot of riders will be the engineering that went into this lift. Even if you don’t care about the physics, the engineering, the kinetic strength of cables, the amount of horsepower required, it’s guaranteed that these things will at least be on your mind the first time you pass that second tower and start crossing the Fitzsimmons Creek watershed at a height of more than twice the tallest building in Vancouver.

The nuts and bolts of Peak 2 Peak

The Peak 2 Peak Gondola is one of three lifts in the world built with a 3S configuration, a Doppelmayr design that places four 4,600 metre long and 56 mm thick track ropes between two points to create a kind of aerial railway. The track ropes support the weight of the gondola cabins.

The cabins themselves will be pulled along by a 46 mm thick haul rope, 8,850 metres in length, that moves at a constant speed. The cabins detach in the gondola stations, slowing down long enough to let up to 28 people exit and board before they are sped up to the same speed as the haul rope and clamp back on to it.

To hang the track ropes, the mountain cut narrow runs down the side of the mountain underneath the patch of the gondola, with a series of mini towers supporting the cable until it could be winched into place. Because of the weight of the cables — each track rope weighs 90 tonnes — the winching was accomplished in a staged process, pulling a series of thinner ropes and cables up the mountain in succession. A thin nylon rope pulled up an 8 mm cable, the 8 mm cable hauled up a 13 mm cable, and so on.

If you guessed that the second and third towers, those on either side of the gap, would bear the most weight, you would be right. For that reason the engineers designed the track system so that the track ropes can be moved back and forth to reduce wear and tear and greatly extend their service life.

One of the benefits of the 3S design is that it improves the stability of gondolas. The track system and weight reduces bounce and the cabins move less in the wind. It will barely move in wind speeds that are typical for the elevation, and will be affected less by higher winds than other lifts.

The haul rope will pull the cabins at roughly 7.5 metres per second, crossing the total span of 4.4 km in approximately 11 minutes. For perspective, the Village Gondola runs at 4.5-5.5 metres per second. One cabin should depart the station every 49 seconds, with 28 cabins having a capacity of 28 riders each — 22 sitting and six standing. The hourly capacity is 2,050 people.

Passes for the Peak 2 Peak are automatically included in all Spirit Passes, and are optional for people purchasing season passes and Edge cards, either on a seasonal or a daily basis. If P2P access is purchased as part of a pass that also includes summer access.

Day passes are also available to use the Peak 2 Peak.

The Peak 2 Peak gondola will open Friday, Dec. 12 with an official ceremony getting underway at 10:30 a.m. on both mountains. Crazy Canuck Steven Podborski and event planner Kristen Robinson will emcee the event on Whistler, while freeride legend Mike Douglas and Olympic snowboarder-turned-commentator Tara Teigen will do the honours on Blackcomb.

There will be music, speeches, VIPs, and an extreme appearance by Red Bull before the lift starts turning at 11 a.m.

From 11 a.m. to 2 p.m. there will be an interactive display in the Roundhouse Lodge, with an artists’ gallery, a technology zone, a kid’s corner, and a video playing on a giant plasma screen.

The Grand Apres celebrations continue at the base of Whistler Mountain from 3 p.m. to 5 p.m. with live music, video, and a kid-friendly performance by Norman Foote from 3:15 p.m. to 4:15 p.m. As well, celebrations will be going on after 3 p.m. at Merlin’s, Dusty’s and Garibaldi Lift Company.