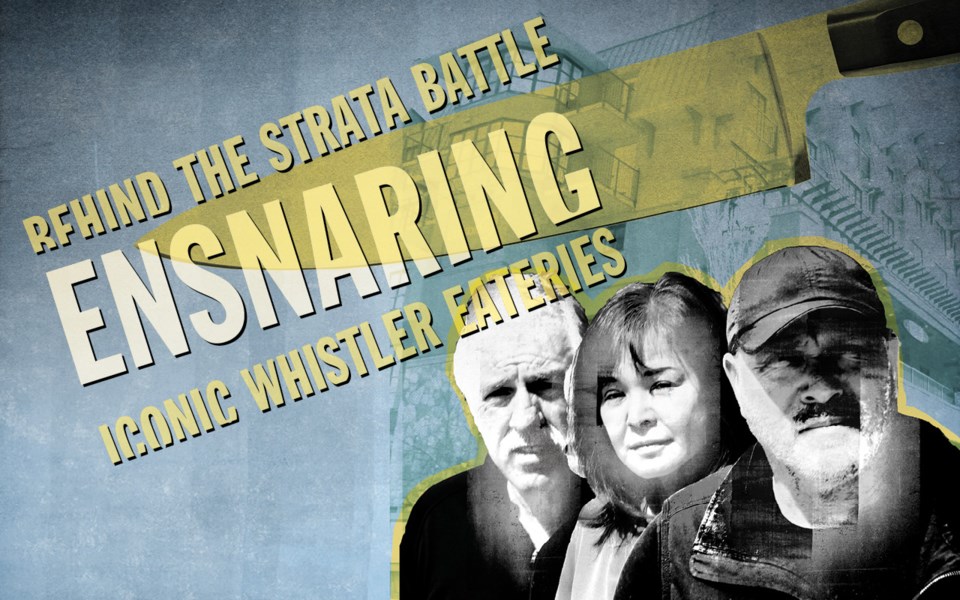 Some of Whistler’s most established restaurateurs have petitioned the B.C. Supreme Court to stop developer, Concord Pacific, from orchestrating a ‘strata squeeze play’ that could see their popular eateries being sold for pennies on the dollar.

The petition, if successful, could also set a precedent on how businesses in strata-owned buildings in British Columbia are valued, when a strata is dissolved for a bulk sale—an issue many Metro Vancouver municipalities face.

In their petition, the restaurateurs cite an earlier B.C. Supreme Court ruling involving the Plaza of Nations land in Vancouver that found conduct of Concord Pacific’s senior officials as “dishonest,” “problematic,” and “unreliable.”

“Under the current formula being used by Concord, the parking lot in the building is worth three times more than my property where I had been operating Black’s Pub for over 30 years,” said Lawrence Black, a key player in the ski resort’s bar scene.

The other restaurateurs facing a similar low valuation for their longstanding operations are Naoko Homma of Sushi Village and Wayne Katz of The Mexican Corner.

Collectively, the petitioners have long been known locally as the “go-to guys,” as their pubs and restaurants have been used for countless fundraisers in the community.

“They have always been there to help us and we are not going to simply stand by and see them being forced out for pennies on the dollar… They are the people who actually helped build Whistler into the incredible and successful place it is today,” said former Sushi Village employee Feet Banks, who plans to mount a campaign to ensure the restaurateurs get a fair deal.

“I believe Concord Pacific is trying to railroad our friends and neighbours out of their livelihoods and legacies … It’s a strata squeeze play that could have huge ramifications for Whistler,” added Banks.

“This has become a community issue.”

Whistler Mayor Jack Crompton said he understands the angst in the local community over the issue.

“The restaurant owners are outstanding members of the community but our hands are tied,” said Crompton, who has raised the issue with the provincial government to see if it would implement a 100-per-cent vote requirement for the wind-up of strata corporations in mixed-use buildings.

Marielle Tounsi, spokesperson for B.C.’s Ministry of Municipal Affairs and Housing, said the government is aware of the Sundial strata case but has no plans to change the legislation around dissolution of strata corporations.

“Under the Strata Property Act, strata corporations, whether commercial, residential or mixed use, are all treated the same. The Act also requires a court order approving the dissolution. In doing so the court must consider the best interests of the owners, including any significant unfairness to any owners who voted against the dissolution,” she said.

At the core of the dispute is the “interest on destruction” concept on how money from the sale of the entire building is divided by the various owners, once there has been an 80-plus-per-cent vote to dissolve the strata, and after a court approval of the same.

In the Sundial property, the “interest on destruction” schedule does not take into account any upgrades, additions or the value of a business itself in the commercial units.

Last August, Concord Pacific, which owns more than 80 per cent of the lots in the strata corporation, held a vote to retain a liquidator to identify a buyer for the property with a view to making an application to the court under the provisions of the Strata Property Act for a winding-up order.

Concord has also indicated that it will bid on the sale of the entire building.

Lot owners Sushi Village, The Mexican Corner, Black’s Pub, and a fourth owner in the building opposed terminating the strata, saying they will get pennies on the dollar under Sundial’s “interest on destruction” schedule.

Assuming that the entire building is sold for $80 million today, Black’s Pub would be allocated about $2.1 million, while the parking garage in the building would be valued at $7.49 million.

In his affidavit, Black said he was offered $18 million for his business and real estate. He recently sold the business alone to Gibbons Whistler for $3.25 million.

“I have an offer for $14 million for my property but under this process, I will be lucky to walk away with $2 million,” he said.

Black also claims in his affidavit that the prospective buyer had been told to “lawyer up” by Concord, after he made the offer to buy Black’s Pub. The buyer has now held back on completing the deal for the property.

Kevin Zakreski, staff lawyer with the B.C. Law Institute, which helped design the framework for parts of the Strata Property Act, said the current legislation views a strata “as a strata as a strata,” with no distinction between residential and business owners.

Zakreski agreed with other real estate experts, including Professor Douglas Harris of the Allard School of Law at the University of B.C., that the current strata dissolution laws were constructed with only residential buildings in mind.

For instance, the City of Richmond in a staff report on strata redevelopment addresses only residential properties and does not have any guidance on the value of a business in a wind-up sale. This is the case with the City of Vancouver and the District of North Vancouver and several other municipalities.

David Church, the lawyer for the Whistler restauranteurs confirmed that an amended petition, which among other things, is seeking a permanent injunction against the bulk sale of the Sundial property without a unanimous vote by all strata holders, has been filed.

The allegations made by the petitioners have not been proven in court, while Concord Pacific did not respond for comments on the dispute.

However, Concord Pacific took out an advertorial recently in Pique Newsmagazine to present its case.

“In 2016, an affiliate company of Concord Pacific, together with a few owners, purchased the Sundial Strata Hotel with the vision to participate in Whistler’s phenomenal growth trajectory and ultimately cater to a wider range of customers, especially families,” the developer said.

Although the collective group members own more than 80 per cent of the strata and thus have majority vote on the strata to proceed with its plans, they received strong resistance by four strata members who started legal claims to thwart the modest renovation plan.

“They are opposing our plan and in the meantime we learned the asking prices for their units are multiples of assessed value,” the advertorial said in part.

“This whole situation is very stressful,” said Naoko Homma of Sushi Village, which is part of Whistler’s original restauranteur family.

She and her late husband Miki opened Sushi Village in 1985 and the eatery has become an icon as the resort grew to become an international destination.

“We have invested our lives in building this business and I can only hope we can survive this threat,” Homma said.

Concord is also mired in a legal dispute with Singaporean billionaire Oei Hong Leong over the Plaza of Nations lands described as one of the most valuable remaining pieces of waterfront land in Downtown Vancouver.

Oei is suing Concord Pacific president Terry Hui and others over an alleged “conspiracy” to tie up valuable downtown waterfront property in litigation to hamper his efforts to develop the lands with other Canadian or international developers.

The lawsuit also references a $40-million “surreptitious” transaction involving the Asian property titans, as the city is agog with a money-laundering inquiry looking at suspicious cash flow-throughs via Vancouver’s red-hot property market.

This lawsuit followed a judgement last July by Justice Peter Voith of the Supreme Court of British Columbia, who presided over the case where Concord’s Hui had originally sued Oei for allegedly acting in bad faith and breaching an agreement to sell his Plaza of Nations land to them.

In dismissing Concord’s case, Justice Voith concluded it was Concord which had negotiated with Oei and his company in bad faith describing the evidence and conduct of Concord’s senior officials as “problematic,” “unreliable” and “dishonest.”

Navigating educational uncertainty
Aug 27, 2020 2:00 PM
Comments
We welcome your feedback and encourage you to share your thoughts. We ask that you be respectful of others and their points of view, refrain from personal attacks and stay on topic. To learn about our commenting policies and how we moderate, please read our Community Guidelines.