Castles on the Rhine

The fortresses of medieval robber barons have been taken over by tourists
Dec 4, 2009 6:18 AM By: Jack Souther 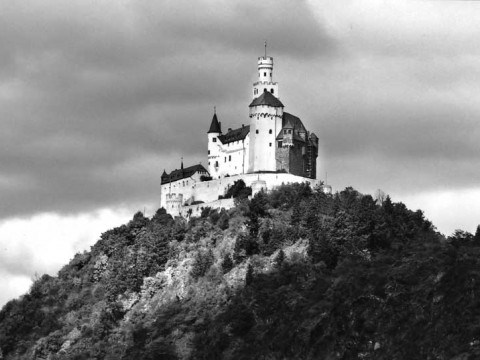 I had just poured myself a drink in the forward lounge and joined Bud, a fellow traveler from Australia, when the ship's PA system crackled to life. "Ladies and gentlemen Maus Castle, one of the most beautiful on the Rhine, is coming into view on the left side of the ship." Bud downed his drink and gave me a wry smile. "ABC," he said as he headed for the top deck with his camera.

The acronym for "Another Bloody Castle" is understood by anyone who has been a tourist in Europe and nowhere is it more appropriate than in the Rhine Valley. A castle (or the remains of a castle) hovers over almost every town and dominates many strategic promontories in between. For castle-weary tourists they are just another photo op. But for mariners in the middle ages each castle was an obstacle as dangerous and as unpredictable as the uncharted rocks in the Rhine Gorge.

Before Germany became unified in 1871 the Rhine Valley was a patchwork of small principalities, independent towns, and an assortment of guilds and corporations, each laying claim to its stretch of the river. They bore no allegiance to anyone but themselves - levied their own taxes, fought their own wars and charged whatever they could get for the right of passage through their self-proclaimed territory. In the 14 th century there were 62 customs stations on the Rhine where captains had to stop and ante up a tariff before moving on. Even worse, eight of the cities practised what was called "staple rights" which allowed them to force a ship to unload and sell its cargo locally.

Not surprisingly the Robber Barons who levied the tolls and taxes were not that popular with everyone. A well-fortified castle backed up by a troop of loyal men-at-arms was a necessary requisite for survival, not only as protection from lawless bands of pirates and outlaws, but also from malicious neighbours and disgruntled subjects.

Most of the castles along the Rhine were built during the Middle Ages, before gunpowder came into general use. The outer curtain walls and an inner shield wall with crenulated battlements and arrow slits were designed to protect the defenders from an assault by men armed with swords and spears, not firearms. If an enemy managed to break through the outer walls the beleaguered defenders could seek final refuge in the keep or central watchtower. This was the tallest and strongest building within the walls and access to it was limited to a removable ladder on a narrow, easily defended spiral stairway designed to give an advantage to the defenders. By spiraling up to the right the stairwells provided sword-swinging space for a right-handed defender while attackers facing up the stairwell would have to hack at the defending knight with their left hands.

Unfortunately these clever defensive tactics were ineffective against muskets and cannons.

During the 1500s and 1600s a series of religious wars swept across Europe and by the end of the Thirty Years War in 1648 half the population of Germany had been killed and its cities and farms reduced to rubble. Most of the castles along the Rhine lay in ruin and the few that survived the Thirty Years War were pounded into submission by French cannons during the late 1700s. The German states along the Rhine were absorbed into Napoleon's empire and the castles along the river no longer had any strategic value.

Many of the castles have been partially or wholly restored using the original stones. Some have been converted to hotels or other businesses and a few are the private residences of modern-day "barons." But of all the castles along the Rhine only one escaped the ravages of war undamaged. Marksburg Castle, perched on the very top of a steep hill, surrounded by heavily reinforced walls and protected by its own battery of cannons, was simply too formidable a target to be challenged by the various armies that swept through the Rhine Valley. Except for a new coat of paint Marksburg Castle has not changed much since it was built some time in the 1100s. The knights and their ladies who once lived there have been replaced by modern tourists but, despite the crowd, our tour of the castle with local guide Jennifer was a fascinating glimpse into the lives of its medieval inhabitants.

From our moorage in Koblenz we took a bus across the Pfaffendorf Bridge and up a winding road to the parking lot below the castle. From there a steep pathway leads to a fortified balcony, past a battery of cannons to a massive gateway through the outer wall and into the main courtyard. The entire castle, from its towering central keep to the dim recesses of its dungeons, has been refitted with genuine medieval trappings from kitchen utensils and armaments to ornately carved furniture and a half finished horseshoe resting on an anvil in the foundry. The vast kitchen where freshly killed ducks and pheasants hang on a wall above counters cluttered with primitive cooking utensils looks as though the servants have just prepared a meal - that they are perhaps serving the men-at-arms in the next room and plan to return at any moment.

We wandered through the knight's hall, where the men-at-arms took their meals, paused to marvel at the austere elegance of the great hall where the Baron and his lady entertained visiting aristocrats and had a peek into their bedroom.

"That's an awfully short bed," I said to Jennifer. She chuckled as she explained.

"Back in 1400 people were fearful of lying down. That was the position of death so they slept sitting up. And the curtains are there for a reason too. Castles were cold places and not very sanitary either. The curtains keep in heat and the canopy over the top keeps bedbugs and spiders from dropping off the ceiling into the bed. Life in a medieval castle was actually not that glamorous."

And for the poor souls who occupied the basement medieval life was brutal.

Jennifer led us into the dungeon and past its array of ingeniously sadistic devices for inflicting pain and suffering on the human body. Those guilty of saying unflattering things about the almighty or the resident Baron were clamped into a device that prevented them from lifting their heads and turned loose to wander the streets in a permanently bent position - a punishment known as being "pig headed." More serious utterances of blasphemy were dealt with by fastening a chain to various parts of the offender's anatomy and suspending him from the ceiling.

It was a grisly end to our tour of Marksburg.

Two days beyond Koblenz the Spirit tied up in Wertheim and we set out to explore the remains of that town's castle on a bluff above the town. It was a cold blustery day and the few of us who braved the rain and long climb had the ruins virtually to ourselves. Wertheim Castle has not been restored and in many ways the eerie silence within its crumbling walls is more haunting than the refurbished rooms of Marksburg. The walls of the great hall still tower above the outer ramparts but the roof is gone and the massive doorway of the main entrance leads into empty space. The towering keep and a multitude of balconies, passageways and viewpoints provide for hours of exploring. The castle is part of a complex of palatial fortified buildings that was begun in the 12 th century and continued to expand for the next 300 years. In 1634, during the Thirty Years War, it was destroyed by imperial troops and it remains one of the largest castle ruins in Germany - an enduring monument to the "age of chivalry" which ended almost 400 years ago.

Yes, labour trafficking & exploitation happens in the Sea to Sky
Jul 12, 2020 8:00 AM
Comments
We welcome your feedback and encourage you to share your thoughts. We ask that you be respectful of others and their points of view, refrain from personal attacks and stay on topic. To learn about our commenting policies and how we moderate, please read our Community Guidelines.