Cornucopia brings a taste of Quebec to Whistler 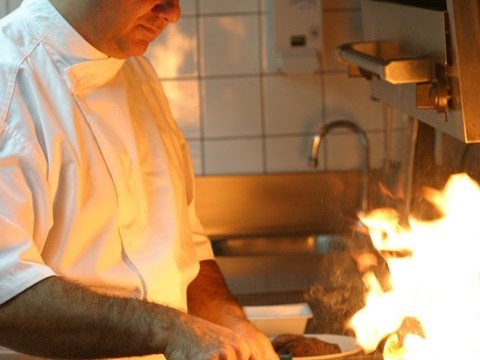 Cornucopia is broadening its scope, inviting chefs from Quebec to help visitors taste the breadth of what this country has to offer.

For the first time ever, the Cornucopia wine and food festival is bringing four chefs from La Belle Province for "A Taste of Quebec in Whistler," an opportunity for attendants to taste food from restaurants in Montreal and Quebec City.

Chef Jean-Luc Boulay from Le Saint-Amour in Quebec City will be cooking a five-course tasting menu at Il Caminetto di Umberto on November 11.

"J'adore Whistler," he said in an interview in French.

A friend and former employer of the Bearfoot Bistro's Andre St.-Jacques, he'll bring a menu that includes foie gras, caribou, crème brulee with syrup from the province's Mauricie region and he'll also be bringing chocolate bars made with Quebecois honey.

Boulay said this is at least his third time coming to Whistler after working a month at the Bearfoot Bistro during the Olympics and another trip five years before that.

Laurent Godbout from Montreal's Chez L'Epicier is also coming to Whistler. He'll be at Quattro on Friday night, cooking a three-course menu including white turnip open ravioli, snow crab salad and grapefruit froth. Other entrees will include suckling pig fondant with mustard and tarragon, as well as veal filet, Parmesan mousse and cinnamon jus.

"I came for the first time in my life this spring, in Whistler," he said. "I met (Bearfoot Bistro PR coordinator) Marc Des Rosiers and (executive chef) Melissa Craig - she did a special event here in Montreal last winter - and thought that the place is so beautiful and they asked us to come back to do this event."

The series takes its inspiration from the Montreal High Life Festival, an annual culinary and wine festival that features a different destination every year. Cornucopia organizers felt it would be a great idea to sample different regions at this year's festival, and they plan to carry it forward from this year.

All four chefs will also be presenting a 50-person luncheon in a private Whistler home on Saturday as part of Cornucopia's food events series.

That evening they will take part in an extensive food program taking place as part of Masquerave, a huge party being held to benefit Cirque du Soleil founder Guy Laliberte's One Drop Foundation, which promotes access to water worldwide.