Masquerave resurrection to headline food and wine weekend
Nov 9, 2011 9:01 AM By: John French 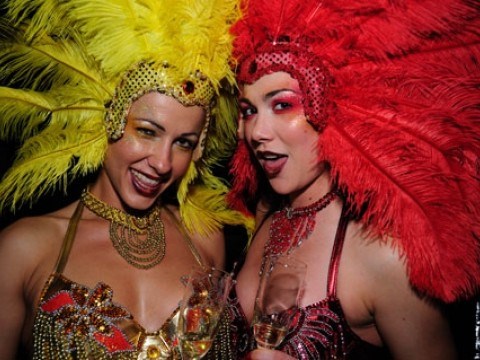 For food and wine lovers, the other Christmas has arrived.

Cornucopia marks the one time every year when everything takes a back seat to food and beverage for a few days.

The weekend celebration kicks off today (Nov. 10) with the Whistler Chef Challenge at the Whistler Conference Centre. The free event is pitting four food preparation teams against each other in a live cook-off to crown a champion.

Through the rest of the weekend a series of dinners, parties, seminars and wine tasting events are planned.

One of the most anticipated events this year is the resurrected Masquerave party hosted by the Bearfoot Bistro.

Andre St. Jacques, owner of the bistro, said he was asked to bring back the party after putting it into hiatus in 2006.

The 2011 revived party is described as a wine tasting event with a food program featuring dishes from four leading Quebec chefs along with six chefs from Vancouver. Musicians and DJ's will keep guests entertained through the evening. An Infiniti G3 body painted over the course of 300 hours by artist Heidi Taillefer of Montreal will be auctioned during the party. Proceeds from the sale of the car will be donated to One Drop, a charity that is dedicated to ensuring people in the third world have access to clean water.

"It is a new charity and a good charity," said St. Jacques of the organization started by Guy Laliberté, the founder of Cirque de Soleil.

Many of the elements that made Masquerave the popular event it was in the past will return this year. St. Jacques said beverage samples, body painted models, special effects lighting, a Cirque de Soleil performance and a 4 a.m. wrap up time will all be part of what makes the party unique.

"I'm really pulling every gun out of my pockets to have an event that is going to be an event of the century," said the bistro owner.

Said Mayor Ken Melamed of the event: "It looks like it is going to be another one of the highlights of Cornucopia this year."

St. Jacques said expectations for the party are high because of the hiatus and Melamed said he believes the break has proven to be a good marketing strategy for Masquerave.

"The event was edgy and the resort needs to abide by the liquor regulations and sometimes the liquor regulations are constricting to some of the creative ideas that come from our Whistler entrepreneurs," said Melamed. "This has been part of the process to try and work through the concerns. The concerns didn't come from this office but only to the point that we obviously have to retain our relationships with the other agencies involved. Our interest is that these events are successful and attract not just visits to the resort but a positive profile."

The other parties that make up the festival weekend don't carry controversial back-stories. The sold out House Party is set for the conference centre tonight and Crush takes over the venue tomorrow (Nov. 11) and then again Saturday (Nov. 12) with a focus on wine tasting. A full list of the weekend events is available at www.whistlercornucopia.com and tickets to events that aren't sold out can be purchased through the site. Also check out Pique's calendar at www.piquenewsmagazine.com

According to Melamed, events like Cornucopia are key to the success of Whistler as a resort.

Tourism Whistler research also indicates most visitors in the resort during Cornucopia come to Whistler specifically for the event.

Cornucopia was conceived as a festival designed to attract visitors and liven up the resort at a time when traditionally very little happens in Whistler.

A lively resort is the kind of resort the hotels are looking for and Sarah Wark, the assistant director of food and beverage at the Fairmont Chateau Whistler, said people come to the resort for Cornucopia when everyone is patiently waiting for Whistler Blackcomb to open.

"With the popularity of Cornucopia continuing to expand, we are seeing an influx of guests coming to Whistler and many familiar faces returning," she said. "Cornucopia is a weekend that everyone anticipates ahead of time and with its growing recognition, the resort will continue to benefit as this year for the first time ever we have sold out far in advance."

Lynn Chappell, the Tourism Whistler Manager of Partnerships, Promotions & Events for Tourism Whistler said the 15 years of Cornucopia has grown the cultural aspect of Whistler while promoting the food and scene.

"November was traditionally a very, very slow time and Cornucopia has given people a reason to come to Whistler and stay a couple of days," she said.

With the festival upon the community many are already looking ahead. St. Jacques said that the 2012 edition of Masquerave is going to be even better than the party this year.

Sue Eckersley, the president of Watermark Communications, said she too is looking ahead to 2012 and making the festival bigger and better next year.

"This is Watermark's fourth year doing Cornucopia and it has been a pretty exciting year," said Eckersley, the leader of the company tasked with coordinating Cornucopia. "I think that there is a real new zest amongst restaurants to kick it up a notch so we're really excited about some discussions we're having with some restaurateurs and establishments in Whistler to make it bigger and better."

She said she is pleased with the decision this year to bring in chefs from Quebec to partake in the festivities and bringing a Quebec flavour to the festival.

"There's been some great buzz around about putting them in some of the restaurants around town," she said.

According to Eckersley, Cornucopia is a real team effort that brings Whistler together. The community spirit during the festival weekend moves the resort forward and she said she loves seeing the community do well.

"That's what I love the most," she said.