"I can’t think of a more amazing, once-in-a-lifetime opportunity than competing in the Olympics for my country, and on the very same mountain I broke my neck on." Pete Crutchfield looks ahead to the 2010 Paralympics in Whistler.
Feb 17, 2006 2:03 AM By: Skye Burton 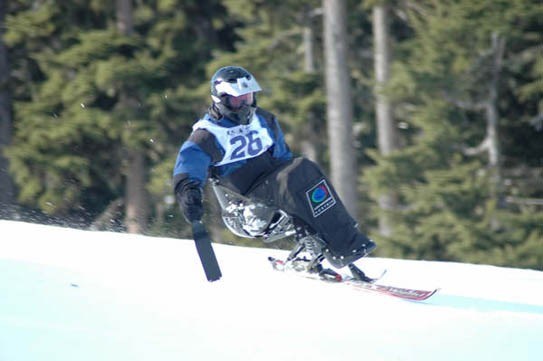 It was a glorious April day in 1996. The sun was out, the skies were clear and Pete Crutchfield was enjoying skiing through the thick, heavy, spring snow that was laden in abundance on Whistler Mountain.

He had just finished skiing the Excitation Chute above the Saddle and was motoring down towards the bottom of the Peak chair when he caught the edge of his right ski. The rapid grabbing on his leg severely tore his inner thigh muscle.

Had he wiped out at this point, this would have probably been the extent of his injuries; however, because he was such a strong skier he managed to remain upright. From this point on Pete’s memory of the accident is pretty vague, but he believes that in an attempt to avoid a boulder that he was hurtling towards he tried to turn. His left leg immediately twisted in the thick snow and he blew out three of four ligaments in his knee.

Wearing no helmet, and with only his arm to protect his head, Pete spiraled into a boulder head first at full speed. On impact he shattered his sixth vertebrae (which had to be rebuilt from portions of his pelvic bone) and also cracked his seventh vertebrae. If this wasn’t serious enough, Pete was also left unconscious, his airways completely covered by snow.

"If it hadn’t been for a girl I’d met two runs earlier named Tania, who was first on the scene, then I definitely wouldn’t be here today. She had the presence of mind not to move me. Instead she dug an air tunnel through the snow so I could breath and then went and called for help," said Crutchfield.

Pete was airlifted from the mountain to the Whistler Clinic where he was stabilized and then airlifted down to Vancouver General Hospital in stable but serious condition. While in the hospital he experienced complications whereby his lungs filled up with fluid and he was close to death on a number of occasions.

After spending three weeks in the hospital he was moved to the G.F Strong Rehabilitation Centre in Vancouver where he spent the next five and a half months enduring intense rehab exercises. Upon release Pete was still required to undergo further rehabilitation as an outpatient for an additional year.

As a talented 25-year-old young man who was incredibly active it would have been understandable if Pete had found the accident demoralizing. Instead he was remarkably optimistic from the beginning of his rehabilitation program.

"I have never felt bitter about what happened. To be honest I have nothing to be bitter about. With spinal injuries it’s a matter of millimeters. I could have quite easily died or could be using a sip and puff chair right now. I feel lucky."

As a child who started skiing at the age of three and who pretty much lived and breathed the sport his entire life, Pete was keen to get back up the mountain as soon as possible.

However, on impact with the boulder, bone fragments were forced to the right side of his spinal cord and he was left with a condition known as hemiplegia. This means that in Pete’s case he was considerably weaker on his right side despite the fact that he was still able to stand; he could only walk very slowly and needed the aid of a cane to do so.

Despite this limitation Pete believed that if he worked hard enough then he would be able to get back to the same level of skiing that he was at before the accident.

"When I was in hospital I set a goal for myself that I would be back up the mountain and skiing again within a year," said Crutchfield "I made that goal with three weeks to spare."

However, once back up the mountain Pete found it much harder than he anticipated. Although he managed to stand up on the skis he would fall down every ten yards or so.

"I thought that it would be a matter of practice makes perfect, but after four years of trying to do it standing up I realized that practice was just making bad habits and I needed to take a different avenue. I was still falling down all the time and I was losing my love for skiing. Going up the mountain had become a chore for me."

It was the Whistler Adaptive Sports Program (WASP) that re-instilled Pete’s love for skiing. This local non-for-profit organization is aimed at making snow sports accessible to people of all abilities – including people with both physical and mental impairments. They also first introduced Crutchfield to the sit-ski.

"The best way to describe a sit-ski is a seat sitting on a shock absorber," he said. "This shock absorber is on a plate that can be clicked into any ski the user wants. The sit-skier controls the ski much the same way as an able bodied skier. This part is important to me because I feel the need to dispel the myth that sit skiing is a very restricted and special way to get down the hill. That’s the sort of inaccurate info that helped keep me away from the sit-ski for so long.

"I don’t consider sit-skiing to be less actual than stand up skiing, just a different way to get down the hill," added Crutchfield.

In his first couple of seasons with the newly established WASP, it was hard for Pete to get up the mountain on a regular basis.

"Despite the incredible support I received from the organization, particularly from Executive Director Sian Blyth at the time, there just wasn’t the level of efficiency in the organization that there is today. Now there is more funding and more volunteers, but there is still always the need for more equipment."

Partially due to WASP’s ongoing support and Pete’s own hard work to raise over $4,000 through stand up comedy and fundraiser nights, he has been able to buy his own sit-ski, and get up the mountain on a full-time basis over the last couple of years.

The extra training has certainly paid off. In 2005 Pete was scouted by Provincial Head Coach Phil Chew and honoured with a place on the B.C. Disabled Alpine Ski Team.

Reasonably inexperienced in competitions, Pete will undoubtedly relish the opportunity to compete in a lot more races over the next couple of years and now has expert training on hand take his skiing to a whole new level.

"My goal is definitely the Whistler 2010 Paralympics," he said. "I can’t think of a more amazing, once in a lifetime opportunity than competing in the Olympics for my country, and on the very same mountain I broke my neck on."

It’s a goal that’s going to require incredible stamina on Pete’s part if he’s to achieve it. With no sponsors onboard at this point Pete schedules his heavy training routine around his full-time night audit position at a local resort.

Pete’s day begins at 11 p.m. at the Cascade Lodge, where he works behind the front desk until 7 a.m. After work he generally has breakfast and unwinds for an hour before heading up the mountain to train until 1 p.m. or later, depending on the conditions. If there’s time he’ll try and fit in some weight training and then grab as much sleep as he can before starting his next day.

"It’s hard enough for amateur athletes to raise funding, but athletes with disabilities have it that much more difficult because they just don’t get the media exposure that the other sports receive," said Crutchfield.

"Not sure why though," he adds. "When you watch a sit-skier tearing down a race course, you know if he wipes out it’s not going to be a crash that he’ll walk away from."

However, the lack of sponsors is unlikely to deter Pete from achieving his ultimate goal. The sense of humour, optimism and zest for life that this cheeky, part-time comedian possesses will surely help him overcome any hurdle he faces.

"There are overseas training camps that I am looking into doing and if I have to then I’ll keep working hard and fundraising to make it all happen," he said.

"Some things, like breaking your neck, just happen. There are others that you have to expend the effort to make it happen. But those are the ones that are worth it."