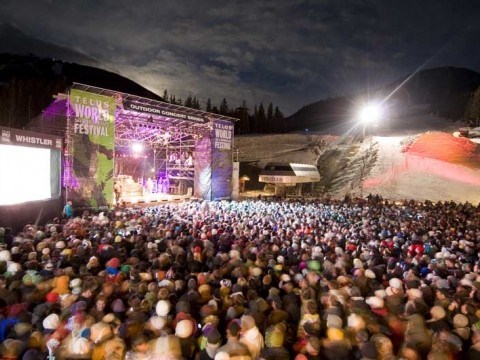 Story and photos by www.mikecranephotography.com

"I am the critic and the fan. I am the co-opted, the collaborator and I am constantly re-creating myself over and over, drawing up from the grassroots and reaching for the stars. I throw down, but never stay down. I am an artist and not playing inside the lines. I am one of kind and together we are the world. I bang the million drums for passion, commitment, bluebird days and attitude. I am here today and gone tomorrow. I am the moment that is constantly passing. I am the powder dump that cannot last. I am the future. We are all riding together. This is my Festival and I LOVE IT"

As the days grow longer, thawing the valley lakes and clearing our vast networks of trails and golf courses of the winter memories still fresh in our minds, the end of another season is upon us. With the spring air comes the always anticipated but never overrated grand finale celebration, winter's closing chapter, before we move on to the endless summer exploits and adventures on offer in our own slice of mountain paradise.

For fifteen seasons, Whistler's original - often imitated but never duplicated - World Ski and Snowboard Festival has been setting the bar for everything that a winter sports festival should be, at the threshold of innovation for snow sports, youth culture and mountain lifestyle.

The festival has its roots in the World Technical Skiing Championships, held on Blackcomb Mountain between April 29 and May 2 1994. It was the first ever joint marketing initiative between then separate Whistler and Blackcomb mountains and the Whistler Resort Association (which became Tourism Whistler), rapidly evolving into a 10 day collection of independent winter sport events in 1995.

In 1996, the World Ski and Snowboard Festival was born to increase late season visitation to the resort by simultaneously hosting the second World Technical Skiing Championships, the World Masters Alpine Open, the World Ski Instructors Festival, the Westbeach Snowboard Classic, the Air Canada Whistler Cup, the Couloir Extreme Race and an industry week.

The first year brought a small but encouraging increase in visitation to Whistler in a once quiet time of the year.

After almost being cancelled in 1997 the festival would go on to add music to its lineup in 1998 by hosting the Matthew Good Band, Econoline Crush and an up-and-coming band named Nickelback. That year would see its first significant increase in visitation, helping to surpass all previous visitor records for the month of April, ultimately recognizing the potential of some of the best late season spring skiing and riding in the world while helping to economically sustain an extended winter season for Whistler.

Over the decade that would follow the festival continued to evolve into three main pillars equally consisting of sports, arts and music, while making Whistler the epicenter of mountain culture. The resort enlisted talent across the board to create a place where some of the world's finest athletes, artists and musicians could influence new trends and celebrate the culture so important to mountain dwellers from around the globe. In the process Whistler also gained invaluable and extensive media coverage and industry-wide rave reviews through the festival, and that increased the festival's ever-important economic impact on our resort.

I had the chance to sit down with Sue Eckersley, president of Watermark Communications Inc. who joined the festival in 2000 and whose team puts on the Telus World Ski and Snowboard Festival each year. Watermark also has a lead hand in hosting Whistler's annual Cornucopia Wine and Food festival in November and the First Night New Year's Eve Celebrations in Whistler Village.

Pique: Comparing year one to recent years how much has the visitation increased - and do you have any stats on the economic impact of the festival?

Sue Eckersley: For the past three years, roughly 100,000 to 110,000 unique visitors have attended the festival each year and in the last report done by a third party the festival was directly responsible for $30 million in economic impact. If you go back to the early years, I will quote a good friend who describes Whistler in the spring by saying, "Before the festival you could have shot a cannonball down the middle of the village in mid-April without fear of hitting anyone." I think people that have been around for a long time will acknowledge that the festival played a key part in shining a bright light on spring skiing in Whistler, and not just for the 10 days of the festival.

Pique: With such a diversity of events, from the action sports to the arts and music, the festival literally has something for everyone. Was that the goal from the beginning?

Sue: No, that vision started purely as a sport property, which is why it was called the Ski and Snowboard Festival. Which is probably one of the things that we have learned the most, is that (sports) no longer encapsulates what the festival is all about, as it is now as much about the music and the arts as it is about the sports.

Pique: What have been the biggest milestones in the festival's 15 years of existence?

Sue: I think that the addition of music in 1998 was clearly a huge milestone, along with the addition of the Pro Photographer Showdown the same year. When you look at other milestones, seeing the Filmmaker Showdown take off into a completely different direction than we had thought, thinking that we would get a bunch of ski movies, it was really cool to see Whistler's arts and film community determine the direction of that event, shaping and directing the arts component of the festival that we see today.

Pique: Every year when planning WSSF, what is the end goal?

Sue: Our mission statement is to build the pre-eminent annual winter sports, music and arts festival in the world.

Pique: Behind the scenes, how big is the team that puts on WSSF and how many volunteers are required each year?

Sue: We have three full-time, year-round staff that work specifically on the festival, along with the 13 part-time staff that form our management team working on contracts varying from one to six months, rounded out with about 20 casual workers that form our on-site operations team. We average approximately 300 volunteers each festival.

Pique: The main stages of the WSSF have seen their fair share of big name bands. How challenging is it to get them to come and perform in Whistler?

Sue: It is probably the biggest challenge we face each year, trying to get the calibre of bands we want with the budget we have, as it so dependant on our financial situation as far as what size bands we can attract. This year, especially, as many bands have already cruised through Whistler during the Olympic and Paralympic Games and we don't want to replicate who has just recently performed in town.

Pique: What have been the most popular additions to the festival since day one?

Sue: Definitely the music, all the surveys that we have now say that the number one reason to come to the festival is the music. Certainly the Pro Photographer Showdown and Filmmaker Showdown always sell out at the venue but don't forget the main stage can have 5,000 people in front of it on any given day in Skier's Plaza.

Pique: Is there any specific highlights that stand out for you from all the years of the WSSF?

Sue: There are so many but I would have to say the John Butler Trio concert was amazing and the Black Eyed Peas with Justin Timberlake will always be epic in my mind as that will likely never be replicated as all the stars aligned on that one. Also the mind-blowing talent that has come out of both the Filmmaker Showdown and the Pro Photographer Showdown over the years is absolutely amazing and just the grassroots level of the festival in general always stands out for me.

Pique: Any specific shout outs or thanks you would like to say?

Sue: There are a lot of spectacular people behind the scenes that make this all happen but obviously (festival founder) Doug Perry for being such a great visionary and mentor with what he did for this event being boggling to the mind. People like Bob Andrea and Sandra Smith in the early days that were in the system at the RMOW, who continually stood up for the event and went the extra distance to ensure its future. Also, Diane Mombourquette and Arlene Schieven at Tourism Whistler were two people always willing to stand up and be heard and help to ensure that that the ship remained straight and true to the original vision, even though they were minorities on the board. Working with the Watermark team is phenomenal, as they are such a creative element within the management team always keeping it fresh and exciting. Also, Whistler Blackcomb and Tourism Whistler have definitely been great partners, acknowledging the fact that even though they are the technical owners of the festival that it is really the community who owns the festival and I think that is pretty special.

Pique: Is there anything new to the festival this year that you are really excited about?

Sue: I am really excited about having the biggest halfpipe this year, literally by bringing in the Olympic pipe cutter to shape our biggest pipe yet and having the most prize money available to the athletes, with probably the best lineup of skiers that we have ever had. We have also added the new re:Action portrait photography contest expanding the arts component. That will be displayed at State of the Art with the winner taking a $2,500 prize and in co-operation with the Squamish Lil'wat Cultural Centre, a photography contest for kids in the corridor. There are a lot of things this year that will make it special, as we try to do every year and not just because it's the 15 th anniversary.

Having had such an impact on Whistler over the years, essentially capturing everything that defines our cultural fabric and mountain society, it is clear that the World Ski and Snowboard Festival will continue to be the flagship winter event that will be marked off on event calendars across the snow sports world, as the premier season ending festival of all festivals. Let the party begin!

Check out www.wssf.com for the 2010 schedule and list of sports, music and arts events.