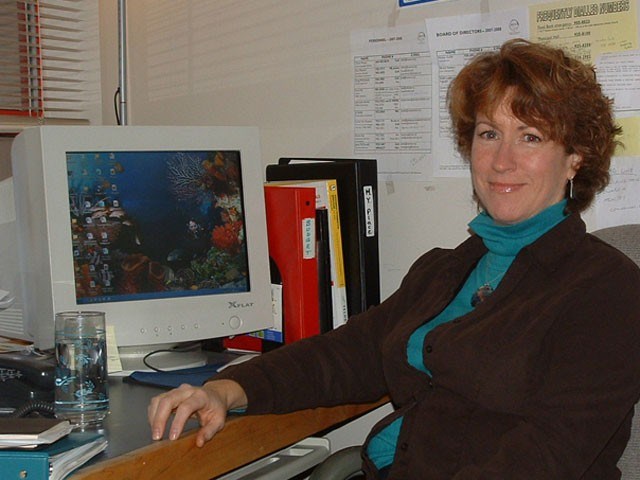 For all of its expensive real estate and reputation for luxury, Whistler is not as wealthy as some people outside the community may believe. Look close enough and you can find poverty, homelessness, hunger, substance abuse, domestic violence, and people everywhere who are struggling to pay rent and make ends meet. There are people who need emergency assistance, who lose their homes, who suffer personal tragedies and need the community’s help for a week, month or year to get back on their feet.

For more than 12 years Janet McDonald has been on the front lines with the Whistler Community Services Society (WCSS), most recently as the executive director. In her tenure she has helped to bring in new community service programs, like the Re-Use-It Centre, KidSport, Welcome Week, the Greenhouse Program, and others, leaving the WCSS in a stronger position to help the community than before. Initiatives she has helped with that are in the process of being launched include a Re-Use-It Centre for building supplies that will open in 2008, and an expanded commercial greenhouse program that will raise more funding for community services.

In December, McDonald will leave Whistler for Victoria to be closer to her extended family, handing the reigns of the organization to youth worker Greg McDonnell.

Pique Newsmagazine caught up with McDonald to talk about her experiences in Whistler, the needs of the community, and the future needs of the WCSS.

Pique: The Whistler Community Services Society now has more than 20 active programs, many of them targetted to low-income families and individuals. At the same time, people outside of the community tend to think of Whistler as a wealthy town. What is your experience with poverty, financial hardship in Whistler?

Janet McDonald: It always amazes me that even people living here don’t get that we have people living near and below the poverty line. When you consider that the major industry in town is the service industry, which is notoriously low paying, coupled with a higher than average cost of living, it only makes sense that people struggle. Because of that factor, even people who are making it don’t have that nest egg or emergency cushion that they can engage when something goes awry and they can’t work. That’s where any of us can get into trouble. The seasonal nature of much of the work adds that extra challenge to the formula. It’s not an easy place to live for sure.

Pique: Who is a typical customer of the WCSS, and what kinds of needs are out there?

JM: The typical customers of WCSS are the young adults and the single parent. Both tend to be financially challenged and in need of occasional assistance, especially during the shoulder seasons when hours are reduced or lay-offs occur. Single parents of course have lots of additional challenges, including grappling with child care and supporting a family on a single salary. These two groups are also especially vulnerable to affordable housing challenges and the general lack of appropriate housing. They sometimes need the leg up with the food bank or Emergency Financial Assistance during the shoulder seasons.

Pique: What has changed during your tenure with the WCSS? Do we have more programs because of the growing needs, or because we have growing resources to meet those needs, like funding from the Re-Use-It Centre?

JM: When I started in 1995 we had about eight very part-time programs including the food bank, which was run by a very dedicated volunteer co-ordinator. I spent most of my time fundraising in the years before the Re-Use-It Centre, which definitely took time away from programming.

The population has more than doubled since I started with WCSS, so the demand on existing programs grew tremendously, as well as the need for more varied programs. We are very fortunate that the Re-Use-It Centre — which now funds 75 per cent of our operation — came to fruition as it has enabled us to start to meet those growing needs.

Pique: The success of the Re-Use-It Centre seems to have caught everyone by surprise, judging by all the renovations and additions. What has been the impact for the community?

JM: The Re-Use-It Centre has been somewhat of a surprise. We believed it would create a profit for programming, but did not expect the amount that it has generated. We just seem to have the perfect scenario of community need and appetite, and the sheer volume of mostly decent goods that makes it all work.

The centre nets over $300,000 a year. This year the centre will have kept approximately 13,000-plus bags of stuff, 1,000-plus large furniture pieces, 2,000-plus smaller furniture items out of the landfill, with 5,600 bags going to other community groups. It offers less expensive options for people — our prices are on par with the Salvation Army and Value Village in Vancouver.

The sheer volume of donated goods means we pass on a good 16 per cent to other community groups and world relief efforts.

Pique: It also seems that the centre has become a draw for people throughout the corridor.

JM: People come from all over the corridor and Vancouver to shop here. We even had a lady show up from Toronto and buy a pair of boots she saw photographed in an article about the Re-Use-It Centre in the Globe and Mail.

Pique: How has the centre and the WCSS responded to times of crisis, like people losing their homes to fires or floods?

JM: Since we opened the centre we have supplied necessities including blankets, warm clothing, furniture, etcetera, to victims of home fires and floods free of cost. Much of the assistance has gone to families in Mount Currie who often seem to be the hardest hit with these types of crises.

Pique: There are always a few special items that get donated — what are some things that have stood out?

JM: A trench coat with $1,700 in cash in the pocket; three limited prints worth over $7,000 each; a large flat screen television; an organ; the complete contents from a renovated three-year old condo; a $6,000 racing bike; a pink diamond ring worth $6,000 that was mis-priced and sold for $3; a new Gucci blouse with a $900 price tag still on it sold for $3; Fluevog shoes; two antique cameos and a Native-carved mask from a B.C. artist all plucked from the landfill and brought to us; an original oil painting from a British artist worth $6,500; and a $1,200 designer purse — once again, sold for $3.

Pique: Housing seems to be one of the toughest issues these days, making it harder and more expensive to settle into the community or go through something like a separation or divorce. Does that place greater strain on community services?

JM: It tends to occupy a good amount of time and energy of our Outreach workers, who deal mostly with young adults, but who also fill the gap of work normally done by social workers, so they help people of all ages with challenges. Unfortunately there’s not much we can do at this point to help people find accommodation when there is little or none to be had.

Pique: WCSS has taken the lead in programs that integrate youth into the community, like Welcome Week, Adopt A Youth, Peer Helpers and so on. Although it’s hard to measure success have those programs been helpful in getting youth onside with the community?

JM: We’ve made attempts to do a bit of longitudinal evaluating of young adults participating in these programs, but it has been challenging as they tend to move on quickly. Certainly, from anecdotal feedback we’ve received, the young adults tend to be quite blown away by the welcome they receive, which we hope sets the right tone for the season and lets them see the real community of Whistler.

Pique: What are some of the things that have happened in your tenure that you’re most proud of?

JM: Definitely some of our homegrown programs have seen real success, including the Peer Educator program, the Support Network of Whistler, the Food Buying Club, the Counselling Assistance Fund, Welcome Week, and of course the Re-Use-It Centre and the Community Greenhouse Project, and the upcoming Commercial Greenhouse project, although I can’t make any claims to those ideas. I do think I’ve done a darned good job at hiring fantastic people — I have to sneak credit in there somehow for our fabulous staff.

Pique: Has anybody thought about what our community service needs might be in the future? For example, we have an aging population that isn’t currently being served very well.

JM: We’ve talked about developing programming for seniors, getting more involved in solutions for our housing woes including emergency housing, as well as delving more into food security and affordability. Those issues will likely need some bigger ticket initiatives that will require greater funding. We’re really hoping that the Commercial Greenhouse and the Re-Build-It Centre will enable us to step up to the plate more in those arenas. That, of course, will be up to my very capable successors. These are very interesting times for the WCSS and the community, and for sure I will be keeping up to date with great interest from afar.

Pique: Is there anything else you’d like to say?

JM: I just wanted to say that Whistler has a tremendous community and that will be very hard to replace. I feel privileged to have collaborated with top-notch people in this community, including volunteers, colleagues, municipal staff and councillors, fellow citizens, clients, and of course the stellar staff at WCSS. Thank you for enriching my life.

The Whistler Community Services Society is hosting a goodbye celebration for Janet McDonald on Tuesday, Dec. 4 in the Scotia Creek Gallery of Millennium Place. All are welcome to attend.