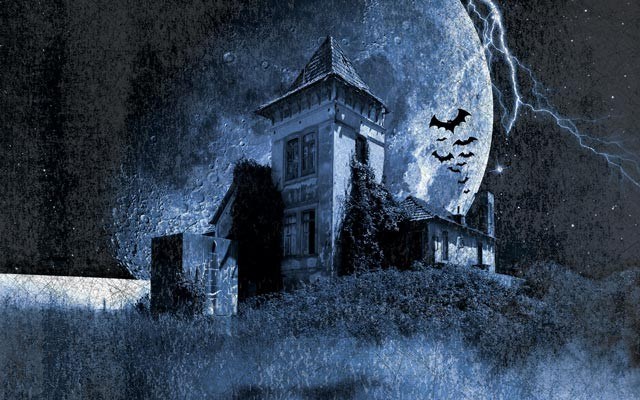 Millicent Horn-Young was going all out this year, mostly with rats.

Some people play Christmas carols at Summer Solstice to remind themselves that it is only six months till Yuletide cheer. Not Millie. She would adjust her shady hat, apply a little more sunscreen and — bending down to remove a couple of weeds while counting down the days ­— wonder if she should turn her Halloween Haunted House maze to the right or left.

For 14 years, the Horn-Youngs had run the biggest and best Halloween house in town. No-one else came close. In the 15th year Harry died, leaving Millie to carry on alone.  She almost didn't do it that first year without him but she pulled herself together, planning the maze helped her survive her loss.

The Barkers were outwardly kind-spirited and they joined all sorts of useful community groups, but their hearts were deeply and sincerely competitive and jealous. In early September the year after they arrived, Jeff Barker told his wife Harper to get in the car. They drove to Walmart, where their dollar could buy more sweatshop-cheap fake blood, stringed jack-o-lantern lights, furry spiders and plastic carving knives. This way they depleted two aisles of Halloween decorations just hours after the displays went up.

The aim was to unseat the undeclared but undisputed champion horror house queen. Jeff and Harper decorated furiously, on October 25 it was ready, but they failed. Quite miserably. Among other things, they hadn't prepared for rain. The following year, they threw a lot more money at both The Bay and Michael's craft store and rigged tarpaulins. It didn't rain, but they failed again.

They didn't have Millie's knack for telling a story. Harry used to say his wife should get a Canada Council grant for her productions. One year it was the headless horseman, complete with life-sized horse statue. Harry hadn't much liked climbing onto it dressed as though he'd been decapitated, but he had to admit it was effective.

Another year, Millie stuck with frightening creatures of the forest: cougars, grizzly bears, wolves, sasquatches and wasps, and called the theme "terror in the wilderness". Mysteriously, she told Harry to wear a suit and zombie makeup and go as a Canadian politician. It ended up being his favourite year, he told her, because he scared the parents more than the kids.

The local families who spent 10 minutes going through the mazes Millie planned and built often did it twice; they might learn the story of a vampire who lost his best friend, or how the mummy escaped from his tomb.  At the end there'd be lots of candy.

All Harry had to do was dress up — he was the lead actor of every annual Haunted House night. Once, he was a ghostly First World War soldier with a gas mask and the next year he was Sully from Monsters Inc. He'd gently growled to make eight-year-olds shriek and laugh. With the 14-year-old boys he was a little scarier because they were too old and too greedy for easy chocolate. They would shriek, too. Millie took Harry's place after he died and she would growl, poke, jump out from hiding and provoke until the last kids left frightened and satisfied.

And, unbelievably to her, now it was Haunted House, Year 20.

Millie had noticed a vague resentment from the Barkers after Haunted House, Year 19 and she had them over for tea. She made a radical suggestion: Why not combine their efforts? They could take out a section of their fence and then tailor the walk to meander from one side to the other, doubling the spooky fun. Millie got excited by the idea.

"We both have so much stuff now that it would be easy. I swear you've bought the same amount of decorations in a couple of years that it took me and Harry eleven years to pull together," Millie said.

Jeff and Harper asked for a couple of days to think about it. Mostly they didn't think; they talked. Harper thought it was a good idea because she felt their brooding about it was wearing them out. Her husband overruled her. Jeff was nonplussed, he wanted to think Millie's mind was at least as small as his was.

"I dunno, I dunno. I don't trust her. I think she's trying to stop us from having the best one," he said, broodily.

In the end, the Barkers declined, telling Millie they wanted to concentrate on black magic this year and they knew she had her heart set on rats. Millie was sorry about it because she thought that black magic and rats were not mutually exclusive, especially when sisters and brothers were dressed as ballerinas and zombies.

Both sides, for even Millie had a sense there were "sides" developing in this, went to work with their planning and building.

The rats theme was coming along nicely. There were trashcans of terror with lids rigged to pop up automatically. There were dark corners where, reaching forward to find a way through, the kids would be met with a swatch of fake fur. Towards the end there was a Toxic Ooze Pond — AKA water, mud and glow sticks — which people would walk through to reach the bowl of candy.

As the sun was setting on October 31, there was a knock on Millie's door. It was Jeff.  She was already dressed as the Queen Rat and he was a bit taken aback by the spectacle of a gray, furry neighbour with whiskers. He realized that he and Harper had already lost the competition. On top of that, they had a big problem and all he could do was try to save all the work they'd put into their own display.

So Millie helped him rig a series of extension cables and plugged it into her garage, none of her fuses blew and as the first toddler dressed as Tweety Bird was making its way up her driveway the Halloween lights on both properties came on. Millie guided the girl, who thought she was Sylvester the Cat, through the maze, with the child's mother bringing up the rear.

As they left, Millie was happy because it seemed to her to mark a new era of cooperation with the Barkers. Maybe they could team up next year. She put these thoughts out of her mind and got on with the evening's festivities.

Millie had seen through dozens of kids by 9 p.m. The under-twelve cohort was dwindling; the older kids were sporadic, having parties to go to. The candy bowl was holding up, though. Millie always made sure it did. There'd been no incidents, not even with the Toxic Ooze Pond, which had worried her lest some five-year-old Disney princess trip in the dark and fall into it. It was two inches of water at most but it would be enough to destroy the dignity of any Halloween royal — and really piss off a parent.

At last, Millie took off her ratty whiskers; the makeup of her costume had been itchy and she had a fleeting thought about the chemicals on her face. As she did, all the lights went out in the maze. Millie was in complete darkness apart from the candles in the pumpkins, though she had relatively few of those because of the fire risk; she had always been careful.

She listened. No sound from the Barkers. Maybe they were inside already.

Inching along slowly, she reminded herself:  "Left, one step, two steps, right. Fur, ugh!" After a few minutes she could see the large lit pumpkin outside the maze at its end.

The glow sticks had burnt out, and like the fur in the dark Millie had forgotten about the existence of the Toxic Ooze Pond. And she knew nothing about the live wire from the extension cord that had somehow just found its way into the water.

All the lights in the neighbourhood went out for real when her foot touched the pond. Jeff put down his binoculars from where he'd been watching and rushed to help her.

He was declared a hero and Harper played her part, calling on her cell for the ambulance so it was there in almost no time at all. Millie was in hospital for just over three months, the first month in a drug-induced coma; she lost her left foot but everyone agreed it could have been worse.

The next Halloween, Millie decided to visit her daughter in Mississauga. But before she left, she had tea with the Barkers and told them all she could about how to make their haunted house special. She was happy to help and she could see they were grateful.