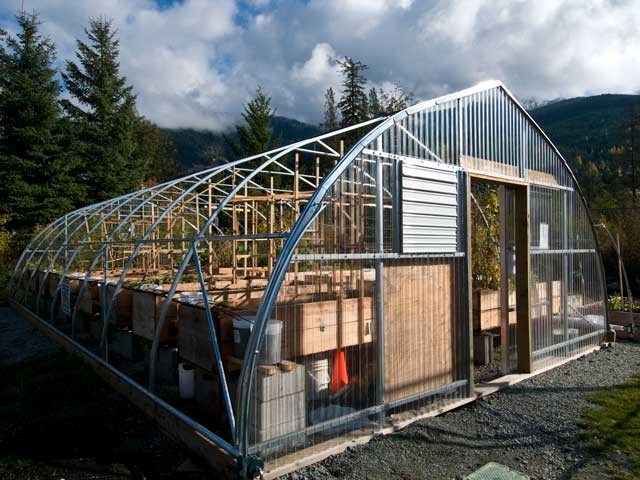 After visiting Stefan and Nic Butler’s farm back in April and witnessing the positive impact they were having on the local food supply in Squamish for the “On the Farm” feature, my wife and I pondered to ourselves how feasible it would be for us to try and grow some of our own food over the course of the summer.

Given the alarming distances that the food we consume travel and how out of touch most of us have become with our food and how it reaches our tables, we decided to take on the challenge and conduct our own little experiment. Food these days seem to be better travelled than even the most avid of travellers.

Having never grown anything other than mold on bread and with a condo balcony facing Kybers as our only growing area it would be an ambitious undertaking filled with trials and tribulations.

Starting slightly late into the growing season, we headed down to the garden center in Function Junction and armed ourselves with two bags of organic top soil and an overabundant variety of seeds for our first attempt, including peas, beans, parsley, chives, radishes, cherry tomatoes, ball carrots and zucchini.

Setting up a rustic garden consisting of large Styrofoam boxes available at any local restaurant serving fresh fish and wooden wine crates from the liquor store we began to carefully plant our tiny seeds in rows separated by what we figured would grow best together.

After around a couple weeks of watering our mini garden began to come to life with a variety of different shaped sprouts searching out the best angles to the sun. This whole gardening thing appeared to be a breeze!

As the weeks went it on however, it became evident that we had clearly over crowded our planting boxes and while everything continued to grow it was clear that some major thinning would be required for the plants to produce anything. Who knew all those tiny seeds would turn into something?

As the sun continued to shine the plants began to bloom into flower and the first glimpse of something edible came in the shape of pea pods, golden yellow zucchini flowers blossoming (great for stuffing with anything from seafood to veggies) and handfuls of fresh herbs sprouting like weeds.

It was without a doubt a rewarding experience to be able to consume some of our own home grown produce, seeing it grow from tiny seeds into something nourishing to both the body and mind. Herbs especially were a useful item, and just being able to take what was needed as they are often expensive in the grocery store and a large bunch is rarely needed or utilized before it begins to wilt.

The final verdict of our first summer growing season can only be described as a successful failure. While we surely would have starved to death if we had to subside on the amount of produce we yielded it was definitely an insightful and humbling experience. It left us much better prepared to maximize our micro growing area next summer, learning from our first-time mistakes. It really makes you appreciate how much land and continued effort is actually required just to feed two people.

Our biggest mistakes: starting slightly late, being over ambitious and attempting to plant too many varieties while overcrowding our growing containers, and, finally, underestimating the amount of sun required from the beginning. While everything eventually flowered or produced lush green leaves our only true successes of the summer were the peas, parsley and chives from seeds, along with cherry tomatoes and strawberries that we purchased as plants. Like every new thing, the next time will be that much better.

While growing produce may not be feasible for all residents due to space limitations and inadequate sun exposure, those who would like to put their green thumbs to work and try a hand at growing can do so thanks to the Whistler Greenhouse Project, which is run through the Whistler Community Services Society.

With the goal of promoting social and environmental sustainability, the project will be going into its sixth growing season next summer with 72 boxes available for rent at three different locations in Spruce Grove, Alpha Lake Park and Myrtle Philip Community School.

Those who are able to reserve a space can rent a box for a fee of $60 per season which runs spring until fall and includes soil, fertilizer, a variety of organic seeds, water, a crash, gardening course and lots of ongoing support. In turn, growers are asked to donate ten percent of their harvest to the local food bank.

With the addition of the new green house at Alpha Lake park this year, the project is now at capacity but WCSS encourages neighbourhoods and strata units to begin their own projects and they are available to provide all of their data and advice on how to maximize setting up your own greenhouse project.

Those interested in reserving a box for 2009 should call WCSS (604) 932-0113 to inquire about getting on the waitlist for next summer.

Trying to address sustainable food practices on a whole other level in Whistler is Dr. Steve Milstein who is the honorary coordinator of Whistler’s up and coming commercial greenhouse project, which will also be managed by the Whistler Community Services Society.

The project, which would fit into Whistler’s sustainable living plan following the Natural Step Environmental Sustainability Program would be a major step towards achieving the goals of Whistler 2020. WCSS hopes that it will also demonstrate the advantage of non-governmental agencies entering into business ventures that are socially responsible and profitable, while simultaneously increasing their ability to deliver needed social services independent of government financing.

Dr. Milstein took the opportunity to share some of his insight, hopes and challenges for the project as he works to transform the idea from a seed into a harvestable product.

Pique: For those who haven't heard, briefly describe the commercial greenhouse concept for Whistler.

Steve Milstein: The plan is for 80,000 square feet of organic commercial greenhouse space growing tomatoes, cucumbers, peppers, lettuces and herbs. The produce will then be sold to local grocery stores and restaurants. The project will use heat from the wastewater plant or utilize geothermal heating (to run year-round). We are now assessing the best and most sustainable source.

Pique: Why do you think this is an important project for Whistler?

SM: The project will eliminate some greenhouse gas due to importing food. It will bring the cost of organic vegetables in Whistler down and move us toward food security. We believe the attention it will bring will help jumpstart more year-round greenhouse production in the corridor, specifically Pemberton.

Pique: Has any land or funding been located to get the project off the ground?

SM: A site in the Cheakamus Crossing development has been located and we are preparing a development application to go on that site. Funding to prepare the development application has been received in the amount of $ 20,000 from the Young Family Foundation. Eight thousand has just been awarded by the Whistler Blackcomb Employee Environmental Fund to get horticultural advice from a professional horticulturist. The Institute of Sustainable Horticulture at Kwantlen University is preparing a MOU between them and Whistler Community Services Society and the RMOW 2020 planning group. Mike Vance has met with us and Kwantlen.

Pique: What are the biggest hurdles currently facing the project?

SM: The next big hurdle is finding sponsors and foundations to donate the capital for installation which is estimated at $2,5 million. We will need to find sponsors as we understand and do not expect the municipality to fund any of this project. The project will only move forward once all of the funding has been found.

Pique: Once operational, who will maintain the greenhouse project?

SM: This will be owned and operated by the Whistler Community Services Society. All profits will to go them for social service projects.

Pique: When do you hope the project will begin producing food by?

SM: If full funding is found by May 1 we expect to be operational by January 2010.

With the continued efforts and commitments of many, this project may become a reality. It could have a tremendous positive impact around Whistler on many different levels, while putting us on the map yet again for being the innovative socially responsible resort we continually strive to be.

As food security becomes a growing issue it only makes sense for communities to take it upon themselves to devote available resources to providing a safe, reliable and local supply of food. Remember the massive spinach scare of 2006 where spinach became temporarily unavailable due to a small amount tainted by e-coli in our centralized food production stream? How about the recent tomato scare this summer that sickened more than 1,200 people in the U.S. with salmonella, thereby costing the industry an estimated $100 million dollars?

Unknown to many is the ever increasing portion of our food making its way across the pacific from China, which has had more than its fair share of tainted food scandals while working under a completely different system of regulation and control altogether.

In the age where the simple ingredients that make up a salad on our plates travel over 3000 kilometres, passing through several hands along the way, we are left to wonder where our food originally came from, and how they got there — squeezing through the many gears of an increasingly unsustainable food supply chain, using up vast resources to reach your plate from California and beyond.

Wouldn’t it be nice to know that some of the food we eat is grown in our own backyard?

Navigating educational uncertainty
Aug 27, 2020 2:00 PM
Comments
We welcome your feedback and encourage you to share your thoughts. We ask that you be respectful of others and their points of view, refrain from personal attacks and stay on topic. To learn about our commenting policies and how we moderate, please read our Community Guidelines.