Whether residents like it or not, Beijing is getting a facelift for the Olympics
Jul 18, 2008 10:07 AM By: Mike Crane 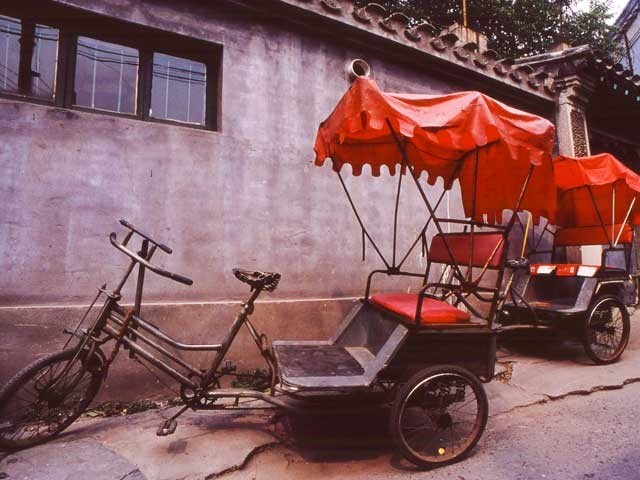 Wandering around parts of old Beijing it appears as if life continues on as it has for many years before. Cyclists make their rounds, children play and vendors set up shop as another day begins in the vast networks of alleyways and courtyards referred to as the “Hutongs” of Beijing.

Lined with people’s homes, shops, markets and services, the Hutongs have long been the veins of Beijing — possibly dating back even earlier than 1215 when Genghis Khan and his Mongol army demolished the area known as present day Beijing.

Making up social networks and forming vibrant communities that have evolved over generations, the Hutongs not only house millions of Beijing residents but also form micro economies that provide many with their livelihoods. They are clearly a huge part of China’s cultural heritage as well as a way of life for the many residents that still continue to call them home.

For visiting foreigners, it is scenes like these — tucked away amongst cobblestone lanes lined with brick homes — that many yearn for and have traveled from far afield to experience. Cruising around on a rented bike or choosing to explore at the pace of your own two feet, this slice of Beijing life is taken in utilizing all five senses. Second only to the Forbidden City, these animated scenes of daily life continue to be a top draw for tourists visiting China’s capital, a city home to over 15 million residents.

Pedaling around aimlessly for hours at a time amongst Beijing’s famous and lesser known Hutongs was definitely one of my most memorable experiences in China. Little alleyways and courtyards seemed to snake on forever, accommodating animated residents all going about their daily lives. Smells both good and bad pervaded the streets and the silence almost seemed surreal compared to the madness of the modern boulevards and highways mere blocks away, where rickshaws and bicycles attempt to flow in harmony amongst the chaos of the ever increasing numbers of cars and motorbikes tooting their horns in a deafening standstill.

Recognizing the Hutongs historical place in China, the Beijing government has looked to the future and designated some districts as protected to preserve cultural heritage. With the Olympic Games just around the corner, however, this way of life for many of Beijing’s residents has already come to an end. Except for those areas designated as protected, many of the remaining Hutong neighborhoods have been living on borrowed time.

In recent years an alarming number of these cultural marvels have been disappearing at a ferocious rate. Throughout the city are piles of rubble reminiscent of war zones that once housed generations of families and local business. Headlines have put the rate of evictions at 13,000 residents per month.

Some were cleared way for new Olympic venues, while the majority of Hutongs are destroyed by government plan to modernize and beautify the city in time for the Games by constructing row upon row of gleaming, cookie cutter apartment complexes, shopping centres, office buildings and sports facilities.

Urban development in Beijing leading up to the Olympics is proceeding at such an unprecedented scale it is said that in the last year alone the construction in Beijing is roughly equal to all of the construction in continental Western Europe over the last three years. Millions of square meters of soil have been relocated to get Beijing ready for its elaborate coming out party at the Olympic Games in August, showing the world how far China has come and staking out China’s place as a 21 st centre superpower.

There is no doubt that a good portion of Beijing was in need of some long awaited maintenance and upgrades. Over the years some areas have been neglected more than others and several Hutongs have slipped with substandard living conditions and dilapidated and haphazardly built structures creating a significant fire hazards. The majority of Hutongs are heated by burning coal, adding to Beijing’s unprecedented and appalling air quality.

Also surprising to many visitors, Hutongs often feature communal squat toilets shared by an entire street’s residents that are neither heated nor air conditioned, and many are known for inadequate plumbing. Some even speculate that large sections of the city could have easily turned the 2003 SARS scare into a rampant epidemic.

“New buildings mean better lives” is the official slogan and by the time the summer Olympics begin estimates put the number of displaced or evicted residents as high as a staggering 1.5 million people, according to the Geneva-based Center on Housing Rights and Evictions. They claim that the evictions began a mere two days after Beijing was awarded the Olympics.

Residents are often given insufficient notice as to when their home will be destroyed and some are forcefully evicted. Many have no choice but to move to the outskirts of the city, often 25 to 60 km from their previous home. Residents also complain that there are few avenues to dispute government compensation rates which often are not enough to allow them to relocate to a dwelling of similar size in the same area.

While the local government promotes its plan as a betterment to the city, many displaced residents claim gross human rights abuses and widespread corruption. There are even reports of thugs being hired by developers to expedite the removal of residents whose homes are on the chopping block, using heavy-handed tactics and even actual violence as a means of removal.

People have been threatened with loss of employment if they don’t go quietly and there is even footage of homes being demolished while residents are still inside. Many Beijingers feel that local government officials are in bed with the many developers who have eagerly capitalized on the push to host the world at the Summer Games.

This period of adjustment will no doubt send ripples through Chinese society. It will be felt for several years, and will have a huge impact on the social fabric of a city that has grown and evolved for generations.

It will also have a profound affect on the micro-economics of several communities. Not only have many lost their homes but many are also losing the small business that generated their livelihood. No matter how modern their new residences may be, many will no doubt have extreme difficulty transitioning into the workforce after having run the family business for generations.

Hutong protests are often met with crackdowns and arrests as China seeks to avoid any embarrassment or international spotlight mere months before the games. The Chinese government had previously denounced forced evictions after a successive rash of protests in September of 2003 during which a protestor even took his own life by lighting himself on fire.

As a condition of accepting the 2008 summer games, China was expected to improve its human rights record and already many eyes watching the nation are taking note and adding this forced gentrification to an already lengthy list of human rights charges. Many feel that in the race to modernize the world’s most populous country the rights of many continue to be blatantly neglected or ignored.

Amidst the growing controversy, even as Chinese officials continue to claim that they are doing everything to balance the best interests of the city on the road to the 2008 Olympics, one thing is certain — the face of Beijing and the life of its citizens will never be the same.

For better or for worse, hosting the Games means an end of an era for many of Beijing’s residents as well as the beginning of a new unwritten chapter in China’s long and animated history.

Back in Vancouver the road to the 2010 Winter Games is not immune to pockets of controversy as evictions of a much smaller scale are disputed and protested by the cities East-end residents. While not homeowners themselves, the long term tenants of low-cost hotels have complained that rooms are becoming sparse and many have been forced to the streets as rooms are refurbished or destroyed to accommodate tourists or new luxury condo buildings — something developers claim would have happened anyway, given Vancouver’s booming real estate market and the physical limitations on development in the city.

Unfortunately, poorly organized protests overshadowed with ludicrous and baseless rhetoric by groups such as the Anti-Poverty Committee may have succeeded in losing public sympathy for the East-end residents’ cause.

Where the Hutongs go, so do Vancouver’s poorest residents.