Jamaica: A tree-house bar in the middle of the sea 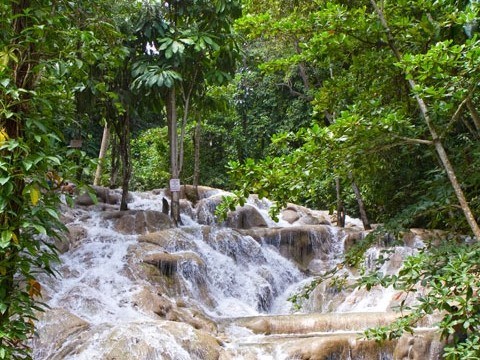 It's a 30-minute ride out to the Pelican Bar in an outboard-driven fishing boat at speed over a half-kilometre of sea seemingly more potholed than the country's roads, and the trip is a thrill in itself. While holding on tightly as the prow slams into yet another wave there's the always prospect of a calming drink at the end of the ride.

The Pelican Bar itself is an idealized tree house, a hut assembled mostly from mangrove wood, with sides a grid work of woven sticks, and a complex jumble of branches to hold up a shaggy grass roof. It looks at once sturdy and fragile. The original was put up in 2001 and lasted until it was blown down by Hurricane Ivan in 2004. By then it had become an established attraction and was quickly rebuilt.

A rickety stepladder of branches leads up to the uneven plank floor supported by a small forest of spindly poles driven into the sandbar below. Despite a small wind turbine on the roof to provide power for the beer fridge behind the small screened-in bar in the corner, the structure is the last word in rustic, also sporting furniture of rough-hewn wood.

Where other pubs have a cat or a dog, the Pelican Bar has pet rays, prowling in the bar's shadow waters, close enough to touch. The occasional prettily mottled crab scuttles sideways across the floor.

Owner Floyd Forbes, the fisherman who built the Pelican after having dreamt of it one night, can be found lounging at one end of a small jetty, too relaxed to say very much. If he's not here when you arrive, his phone number is on a wooden sign over the bar. Call him and he'll show up, or just as likely he'll tell you where the key to the bar is, so you can help yourself. But usually a cold Red Stripe beer or rum punch is quickly produced by a barman.

Surprisingly, the bar is busiest in the morning, with a mixture of pre-lunch, post-fishing drinkers, and people bathing from the steps or jetty. But a trip out at sunset is recommended for the drama of the changing light and a chance to sit, cold beer in hand, and watch pelicans repeatedly lumbering ponderously into the air like over-laden cargo aircraft, only to plummet steeply, with wings swept back, and beak first to skewer fish.

And after a few beers or glasses of Jamaican rum, the ride back under moonlight and past a shoreline now twinkling with lights merely seems to add to the reasons to return the next evening.

For information on travel in Jamaica visit the Jamaica Tourist Board's website at www.visitjamaica.com .

A fresh boatload of imbibers nears the Pelican Bar, a collection of sticks and shaggy grass built by a fisherman on a sand bar a half-kilometre off Jamaica's southwest coast.

OCHO RIOS, Jamaica-On a hot day in Jamaica, which is most of them, one of the more refreshing ways of getting some exercise is to climb a waterfall. Better still, you can do this and at the same time be taking in one of the island's best-and best-known-sights.

Just west of Ocho Rios, Dunn's River plunges 293 metres [960 feet ] down a series of limestone cataracts to the Caribbean Sea. Since the 1960s, soon after Jamaica gained its independence from Britain and started looking for ways to exploit its tourist potential, people have been happily splashing their ways up the falls.

For US$15 (plus a tip for a guide if you use one, which is recommended), you too can ascend the falls, and at that price it's one of the best bargains in Jamaica. You can do it as many times as you like and romp around in a dozen pools on your way up.

When you step in, the water is a bit cold, but you quickly become accustomed to it. The current can take a bit more getting used to, especially in places where it looks like it can push you off a ledge. It could-and in Canada and the United States you probably wouldn't be able to do this even if you signed a waiver (which, by the way, you don't have to here).

That's the best reason for taking one of the 40 guides available. "Every morning," says Raphael Walker, who's been a falls guide since 1990, "I go along my trail for that day and scrape it clean so it's not slippery."

To see Walker do it, climbing the falls is child's play. It helps quite a bit that, as it happens, he's been doing it since he was a kid. But it's not as difficult as it looks when you're standing at one of the viewing platforms watching the water rush down.

The most intimidating section is the 60-metre-high [200-foot-high ] , broad and almost unbroken cascade near the top. To the timid onlooker it appears that one false step here would mean instant death. Possibly, but that's highly unlikely, says Walker. "The part that looks the hardest, that's the easiest. Unless you have a panic attack."

Walker figures about one per cent of the people he guides have panic attacks partway through climbing the big cascade. He remembers one woman who got that look in her eye and refused to move. "Come forward," he said. "No." "Okay, let's go back down." "No." It took several minutes, but he talked her through it and she reached the top.

In fact, "the hardest part is from the beach to the bridge," Walker says. "The current can be very strong there."

Dunn's River Falls gets a lot of cruise-ship visitors. (It's a good idea to time your visit to avoid them.) Some shouldn't attempt the climb, but if Walker can't gently talk them out of it, "then it's my responsibility to see that they get safely to the end." And, he says, they always have.

For information on travel in Jamaica go to the Jamaica Tourist Board's website at www.visitjamaica.com .

A guide leads visitors up the first portion of 293-metre-high [960-foot-high] Dunn's River Falls. One of the most popular attractions in Jamaica, it's also one of the cheapest (US$15). You can stay all day, and there are a dozen pools to splash around in.

Yes, labour trafficking & exploitation happens in the Sea to Sky
Jul 12, 2020 8:00 AM
Comments
We welcome your feedback and encourage you to share your thoughts. We ask that you be respectful of others and their points of view, refrain from personal attacks and stay on topic. To learn about our commenting policies and how we moderate, please read our Community Guidelines.