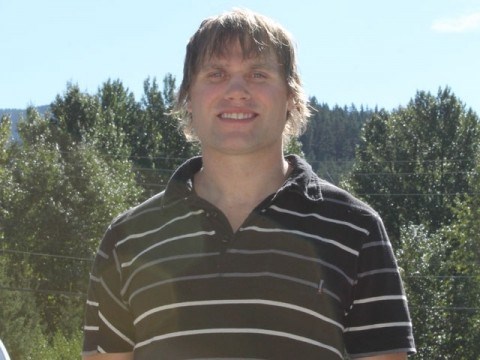 What is something people would be surprised to learn about you? Although conservative, I voted Jack Layton in the last election because I disagreed with Stephen Harper's fiscally irresponsible use of the military overseas. Layton had much more honesty and integrity to his political demeanor, which I consider imperative when deciding whom to vote for.

What do you see as the top election issues? The economy, use of RMI, municipal budget and transparency of government.

How would you address the budget shortfall? Many candidates call for "wage and hiring freezes," asserting mass staff layoffs will solve budget deficits. Such a strategy is flawed, and results in increased initial costs due to extensive severance packages.

More long-term planning and priority setting is required to direct resources toward achieving a limited number of goals and objectives, getting back to our "core competencies."

What do you think is the RMOW's role is boosting tourism? Delivering a sound economic action plan that identifies strategic factors that generate tourism.

An effective strategy is to identify the times in which hotel demand is at its peak and replicate. This occurs during Whistler's festivals (Telus World Ski and Snowboard Festival and Kokanee Crankworx).

Directing a larger portion of our RMI to bring in events will build from our Olympic exposure and carve out a niche. Council must spend more time working with TW on event proposals, pushing to hold as many celebrations of sport, music and art as possible. A logical place to start is World Cup stops, making use of the Olympic facilities. The national TV exposure will yield a great marketing opportunity.

What would you do to enhance the environment for business? Sound investment ideas will improve the economic environment, address weakness, generate tourism, create private sector jobs and build from our core-competency of being a world-class ski resort. Redirecting RMI funds away from the Amenity Hub into an indoor ski/snowboard training facility can produce these results.

Entrepreneurs starting businesses and creating jobs generates economic growth. The municipality could make it easier for entrepreneurs by restructuring business license fees so they are free for the first year, leaving more capital to grow the business when it is needed most and increasing user fees in the long-term.

Give an example of a difficult situation you have overcome: Being a new, youthful member of my strata council, my conservative views and opinions were often overlooked with respect to budget decisions. It wasn't until the Long-Range Planning Committee, which was created to manage a renovation project, announced it would cost upwards of $80,000/unit ($1.6M total) they decided to listen to what I had to say.

Growing up in Huntsville, Ontario working for my father in the construction business, I knew how to solve the problem and the approximate cost. I identified the key cost drivers of the project (professional services from architects and engineers), which were causing the cost and scope of the project to increase beyond the return the proposed renovation could generate.

I refocused the project, eliminated the services inflating the cost and sought quotes directly from contractors who could actually perform the work. I explained what the problem was and the ways we were prepared to address it, and have been able to bring in several quotes under $100,000 for a capital savings of $9.6 million.