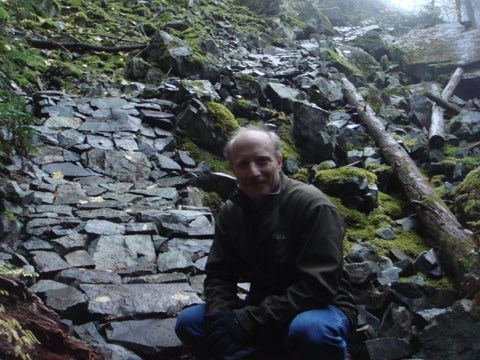 What's one thing people would be surprised to learn about you? I have a good collection of Marvel Comics including # 1 Spider Man and Amazing Fantasy #15 where Spidey was first introduced. The Mighty Thor was my favourite. I loved Norse mythology.

What world leader would you most like to go for dinner/drinks with, and why? King Jigme Khesar of Bhutan to learn about democratization in the mountain kingdom and the Gross National Happiness progress indicator.

What book do you recommend everyone read and why? Lord of the Rings ; it is great fun and adventure, has stories of love and friendship, humour and wisdom. I am a big fantasy fan and this is one of my favourite books.

Give an example of a difficult situation you have overcome? Being the smallest person in class all the way through school.

What are your favourite sports to watch on TV? Hockey, Slalom racing, Volleyball, Table tennis, and Sumo wrestling.

The Emerald Forest is one of Whistler's natural playgrounds.

And it is here, mere steps from civilization, that Ken Melamed seems truly at home. As a councillor in 1999, he took a leading role in protecting it from development, and today its 139 acres of old growth and wetlands give hikers, cyclists and disc golf players a first-hand look at the bounty that nature has bestowed here.

The mayoral candidate, dressed in a Team Whistler cycling cap, brown Op jacket and blue jeans, blissfully takes in the morning mist as it flows down from the heights above and moistens the moss on the forest floor, and for a few brief moments he can forget the gruelling process that is running for re-election.

"Whistler's such a special place," he says as a chorus of birdcalls welcomes the sunrise. "It's a place people dream about being in, and we've been able to live the dream by being here."

At this spot, just a few steps from a disc golf course and the Shit Happens bike trail, Melamed shows off some extra-curricular work he has carried out while sitting in the mayor's chair. He has taken a broken section of bike trail, ravaged and bent by the elements, and fitted rocks like a jigsaw puzzle to make a smoother path for cyclists.

Only a mason could pull off this kind of work, and Melamed's 25 years in stonework clearly shows in this project. Where the path above is dishevelled and broken, here even a less experienced rider need not fear the trail.

"Not many people have done a lot of stonework like this," he says. "There are people that have been doing rock armory, but this is a whole other level. I can't tell you how many hours (I've put in). I probably came out here 20 days."

It would be easy to say that this Melamed is the chilled side of the more combative personality one sees at council meetings, but really, they are both parts of the same persona and they share a motivation: a "passion and commitment to a better world."

Melamed is inspired, in large part, by Torbjorn Lahti, author of "The Natural Step for Communities," a guidebook that talks about how cities and towns can adopt sustainable practices. In it the author talks about "Fire Souls," people who defy suggestions that there's nothing we can do to save the planet, who are determined against all common wisdom to strive for sustainability.

Melamed stops short of calling himself a fire soul, but the association is clear.

"There's a fire in my belly, and for the most part I try and stay reserved and calm and respectful," he says. "But there are times you need to let your frustration and your passion rise to the surface in a more compelling way."

That passion was hardly more palpable than at an April 2010 meeting at the Squamish-Lillooet Regional District, where he doubles as a director for Whistler. At that time, the Garibaldi at Squamish ski resort was in the last stages of an environmental assessment. The regional district had a chance to comment and Melamed wanted fellow directors to be clear and condemnatory in opposing the new ski resort.

Among other things, he objected to what he saw as the developer's "wildly optimistic" assumptions about where the ski industry is going, a lack of information relating to socioeconomic analysis, as well as that, he had not seen a new, successful international ski resort in North America.

"I would ask that we as a board take a much stronger position than that recommended by staff and just outright object or oppose the application and ask that it be given a merciful death at this point," he said, his voice rattling as he fired off reasons to kill the project. "It's really time to pull the pin."

Melamed brings a similar zeal to the proposal for a Whistler University near the Alpha Creek/Millar Creek wetlands next to Function Junction. He says, emphatically, that he doesn't object to a university altogether - just this one, due to its choice of location, close to one of Whistler's few remaining wetlands.

"I've seen five development proposals for that land," he says, not referring solely to the university. "What gets me going is when people say this is sustainable because we're staying away from the most sensitive areas. I'm not a biologist, but I've talked to enough biologists and ecosystem experts who say a wetland depends on its high ground and the adjoining habitat areas as much as what we used to call swamps.

"They call wetlands the lungs of the planet but biodiversity doesn't work without the richness of the variabilities, so you need the wet, open areas, you need the transition areas, you need the tall, open forest. Imagine what 1,500 people would look like. What would you do, put a fence around the school so they didn't wander into the old growth and wetlands?"

Melamed is facing five opponents in total, and two of them have spent months building electoral machines, canvassing social media and holding events to make a name for themselves among the voters.

His campaign has seemed low-key by comparison. At the end of October, Melamed didn't yet have a website, nor any signs up on the highway. He spent more time strategizing and listening to what his opponents were saying than actually jumping on the hustings himself.

"It's been kind of fun watching them go at each other, not knowing if I was going to run or not," he says. "It was entertaining to see how they were going to position themselves."

Melamed's advisors tell him a campaign often comes down to its last week.

On our way out of the forest, Melamed looks offended when he notices discarded pieces of plastic scattered near his stonework - a "callous act," he calls it, as he picks them up and carries them out of the woods, his own small contribution to keeping the Emerald Forest pristine.

Reflecting one last time on his surroundings, he adds: "It's an amazing place, it can be more amazing."