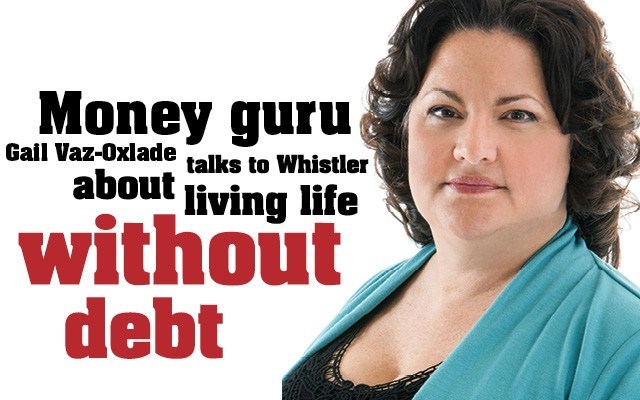 Gail Vaz-Oxlade doesn't mince her words. Known for her hard-line approach to money matters, the popular TV star would like to see Canadians become more financially literate, break the cycle of debt and live without the crushing burden of money woes.

Whistler Community Services Society (WCSS) sees the growing problem firsthand in Whistler, where 23 per cent of permanent residents reported incomes below "living costs" in 2014, according to the latest municipal data.

"As Whistler gets busier, so too do the lives and expectations of the people who live and work here," said Cheryl Skribe, executive director of WCSS. "Our team at Whistler Community Service Society have been seeing the strains of financial stress and anxiety on the community for a while now. Our hope is that by bringing Gail's important message to Whistler, we can begin to open the dialogue around financial literacy in a fun and entertaining way."

Vaz-Oxlade spoke to the Pique's Alison Taylor about her money message. Whistler, she said, is not unique, though arguably the problem may be more pronounced here. Vaz-Oxlade will be hosting a presentation in Whistler on Tuesday, Nov. 3.

Pique: This is a timely conversation. What's your immediate reaction to the recent news that nearly one in six Canadians would not be able to handle a $500 increase in their monthly mortgage payments.

Gail Vaz-Oxlade: At once I am saddened by all the people who have been led to believe that home ownership is the be-all-and end-all — "just squeeze yourself into that house and it will all work out because look at how much houses have gone up in the last 10 years." And I am also angry at financial institutions for not doing their due diligence in granting the mortgages that they have.

Pique: What does it mean for people when interest rates go up?

GV-O: Every Tom, Dick and Harriet who has overextended themselves in terms of taking their mortgage because 'Hey, look your mortgage payment is just the same as rent' is going to wake up to a very different world. I don't know when, but it will be a very different world. We talk about the fact that interest rates are so low well... there's no further downside on that.

Pique: So, interest rates will inevitably go up. How do we prepare?

GV-O: The basic rules of managing your money properly are very, very simple. I'm not sure why we have made them sound more complicated than they are. But they're not complicated. It's: Don't spend more money than you make, save something, if you've got debt get it paid off, and make sure you have some sort of emergency fund and some insurance, so that when the crap hits the fan, the blowback doesn't take you out.My message has always been consistently that you have to figure out, and do the right thing, so that over the long term, you don't have to worry about your money. It just takes care of itself... And that doesn't mean you ignore it. I mean you put a process in place that is always telling you whether you're doing the right thing or the wrong thing. So you have to do a budget.

If you have a mortgage at a very low interest rate, then one of the things you should be doing is calculate what your monthly payment would be if interest rates went up half a point, or a full point, and start living as if that had really happened and put that money away somewhere. That could be used to build your emergency fund. Then what happens is you get to the place where the interest rates go up, and it doesn't feel like you're strangling on your mortgage because you've already learned to live without it. Hopefully by then your emergency money is fully established.

Pique: Why do people find putting this plan into action so difficult?

GV-O: There are a couple of things that come into play. The first and probably most important is: We don't want to have to do anything any differently... If we don't have to think about it, that's just grand. And if we have a way to fill the gaps when things go slightly south — we have a credit card, we have overdraft protection, we have a line of credit, anything we can fill the gap with — we're that much more likely to think we don't have to worry about it. Very few people are giving any real thought to the idea of being debt-free. Debt has become such a norm for us that the idea of living debt-free, to a lot of people, seems ridiculous. They grew up with families that were in debt. They're in debt. They think it's normal. And so it's a hard lesson to say to people, 'You know, cut it out. Just stop doing the things that you've been doing that cause you problems and start doing some of the right things, because those right things don't feel as good as going out for a meal when you're tired and you don't want to cook, or planning that vacation, putting it on your credit card even though you didn't have the wherewithal to save the money to go on vacation but you still think you are entitled to a vacation.'

Pique: In Whistler we have a high cost of living and yet many of our residents work in lower-paying tourism jobs. What's the trick to survival?

GV-O: This is the typical service conundrum. People who work in the service industry have a hard time figuring out how they're going to make ends meet and have a life as well... Something I try to say to people all the time is: forget the word sacrifice. It's not about sacrifices, it's about choices... This is one of the things we've got a hard time wrapping our heads around, this idea of the choices we make. So if you choose to live in a particular area, to do a particular job because that's what makes you happy, then something's got to give. There are other things you just can't have — because you can't have it all at the same time. What we need to do is we need to stop looking at things in terms of what we don't have and start look at it as what we do have.

Pique: So the problem is not unique to Whistler?

GV-O: This is not just a Whistler problem. This is an everybody problem... What happens in our world is that everybody looks in on everybody and sees the good stuff. But everybody has their own shite. And it's a question of: Would you swap your shite for somebody's else's shite? My answer to that question has always been 'No, I'll stick with the shite I have. The shite I know is the shite I'll keep, thanks so much.' But the reality is we look in on people's lives and we don't see their crap. They don't show us their crap. They show us their new kitchen counters, not the fact that their husband hits them. Or they show us their spanking new car, not the fact that they actually don't know how they're going to come up with next month's car payment. We have turned Keeping Up with the Kardashians into our lives. We used to call it 'keeping up with the Jones' but now we call it 'fear of missing out.' And it's ridiculous. Because we stopped looking at what we have, and started only looking at what we have not. That is no way to be happy.

Pique: How do you change your viewpoint?

GV-O: It takes some effort but after a while it becomes really easy. There's a reason why everybody talks about gratitude journals; they actually work. When you start counting your blessings, you get more blessings. Not because your life certainly gets better, but because you start seeing things that are good; stop focusing on the things that are not so good. Take some time and get up in the morning and you go for a walk and all you do appreciate the beauty that is around you. You get to live where God lives when you live in Whistler, right? But how many people take the time to go for the walk... so that they can appreciate why they're in Whistler. It's all about focus.

Pique: Of all the cases you've dealt with over the years, what is the persistent issue that you find the most frustrating?

GV-O: People have no idea what they're spending. So they'll pick numbers out of the air and tell you what they're spending it on, any category in their budget... and they're always wrong. Sometimes they're over-estimating, sometimes they're under-estimating, but they're always wrong. The only you can know this is by taking the time to do a spending analysis and figuring out how you're going to make this work.

Pique: And is this your takehome message?

GV-O: Yes. This is your life. And you get to have whatever you want but you have to figure out what it is you want. You want it all, you can't have it all so you're just going to disappoint yourself. But if you can figure out what's really important to you, and you can focus on that, then in all likelihood you can.

Find out what else Gail Vaz-Oxlade has to say on Tuesday Nov. 3 from 7 to 9 p.m. The presentation will take place at the Fairmont Chateau Whistler. Tickets are $12 and can be purchased at www.eventbrite.ca (Search Gail Vaz-Oxlade in Whistler). Free tickets are available for financially restricted individuals. Call WCSS at 604-932-0113 for more information.