Murder in the Great Big Playground 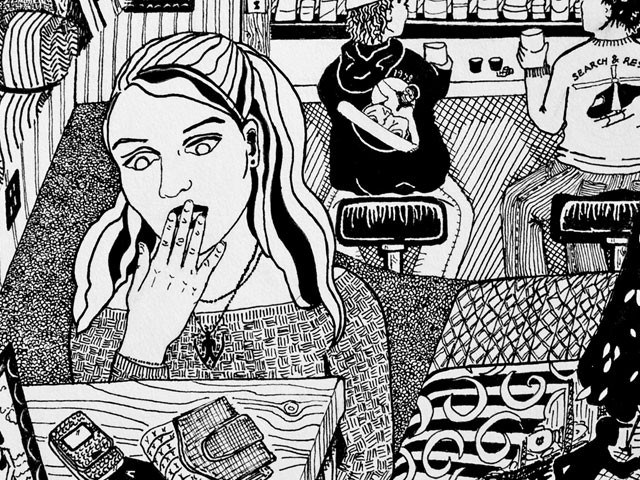 A sweaty Chuck Jessup looks at the earth, disdain directed down at dirty hands. The dank, musty scent of the fertile Pemberton Valley soil packs his nose. Windwhipped tears cloud his eyes. He draws the sleeve of his tattered flannel shirt across his spent grey peepers and peers down at the brown-tinged, purplish object freshly yanked from this living, vital soil…

“Goddamn it, if I never see another potato in my life, I’ll be happy. This farm is gonna kill me,” mutters Chuck, picking up the potato and chucking it as far as he can. An audible “sploosh” brings a satisfied smile to his face, the tossed tuber tumbling down the Lillooet River never to return to remind Chuck of his farm roots and his devious desire to harvest untold riches from this land. Never to return.

This land. The land Grandpa Spuds had inherited from his father, who had inherited it from his father… farm from father for five fairly finely fathered families. Protected by dikes. Held back. Floods which over time, naturally built some of the most productive, isolated farmland in British Columbia. Priceless potato plantings. Revered around the globe for its end-of-the-road geography, sheltered from the savage and unpredictable storms of fat cat city developers and vigilant viruses, the land was prime for sustained, quality production. For the past 27 years, since the day he was born in the old farmhouse by the crook in the road, Chuck patrolled the virtual verges of this land, trying never to do anything with respect to it, disdainful of his hayseed neighbours who were content with their dirty fingernails and cowshit-covered boots. He had come to resent this rich, vital soil and all it grew.

Now he didn’t envision producing anything except easy money from this land. Toil and hardship at the hands of the arbitrary and oft-cruel farmer fates of weather, water, wind, bugs and soul-sucking subsidy market-based pricing had turned Chuck sour on the once-coveted role of “the next great farmer.” When he mulled over his future farm plans, none had him at the wheel of a tractor pulling the olfactory offensiveness Grandpa Spuds called the “honey wagon.” In fact, Chuck pictured himself in a city – wealthy, well respected and wisely-wifed – you know, the trophy type. Honey waggin.’

“Don’t worry, nothin’ bad’s happened.” Rory slows, saunters over the potato rows, “We’ve gotta celebrate man, I just made the Olympic snowboard team. I really don’t think those Japanese girls have any idea what they’re in for.”

Twenty minutes later Chuck, Rory and a red’n’rusty one-tonne farm truck, two hooch bottles and quarter tank of fuel, floor it as they fishtail furiously around the front gate; dust, hollers and Nagano mon amour redlit in the taillights.

“Do you think we’re ever gonna come back to this Mosquito-messed potato-possessed valley after we make it large?” Rory bellows at Chuck over the hammering engine…

Chuck can’t help thinking to himself: “Look, you’ve got it made. On the first team of Canadians to compete for Olympic medals on a snowboard. When you get home they’re gonna give you a sunny lot on Green Lake, a permanent lift pass and a free parking spot under the gondola barn. Shucks, they’ll rename that picnic area by Fitz Creek McDougall Park if you get a gold.”

Hands battle back to the steering wheel as no one else’s in control. “I’ve gotta lot to look forward too… dirt, diesel tractors and pretending I’m stoked our winter squash was certified organic.” Chuck looks down through the hole in the floorboards to the wildly rushing weeds and blackish-purple tar below. It’s all a blur.

“I’m really stoked about this Olympic thing, I don’t got much else right now man,” Rory leans over and yells into Chuck’s ear. “You’ve got the farm… you’re set. I’m older than most of the guys rollin’ the snowboard scene right now. I really think the Olympics will take me over the top. Freeride team all the way after I get back from the Games…”

“Pal, I’m with you. But don’t count on me farmin’… I’ve got a gold medal exit strategy that’s gonna look after me and you both,” Chuck smirks and pins the truck, rocks and straw spraying the old, red church on the corner. “Some hippies think they’re turnin’ that old ratbox church into a house! Rats don’t move out, ever. Christ!”

An hour later, Chuck and Rory are backcountry, deep into the Hurley River Road to Bralorne. Railroad Pass. Sultry succulent, the sweet scent of Donnelly Creek strokes the lads on the cheeks as they lean over, form fishlips and drink… deep and hard.

“Okay, you have the map. I’m not gonna make one. We’ll rip this one in two and each keep half, that way we’re partners forever. This is bigger than your wildest dreams man, we could make millions… play our cards right. We need to keep this buried, dirty package between us. You give the map to anyone else, I’m out and we both die. Understand?” Chuck rips and passes. One map. Two men. Solitary, silent secret.

"In the sweat of thy face shalt thou eat bread, ‘til thou return unto the ground; for out of it wast thou taken: for dust thou art, and unto dust shalt thou return.” Genesis 3:19

The Pastor purses his pout and steps back: “This is one of Chuck’s favourite songs, he told most of his close friends it was the song to be played at his memorial.”

The choir slowly segues into Guns ‘n Roses “Sweet Child of Mine.” Just inside the door of the church at Chuck “Mess-up” Jessup’s memorial, The Girls hover. Not connected enough to sit inside, not disconnected enough to go to the bar around the corner. Janna St. James runs into the foyer looking mostly manic and dearly disheveled… Jean Jones clutches at Patti’s sequined arm and whispers. “If she’s here…”

“By the way, where’s Minty!” Jenna screams at the assembly.

This is the fourth year for the Whistler Collective Novel Experiment, a literary collaboration of local writers put on by the Whistler Writers’ Group, the Vicious Circle. Each week the Pique will publish the next chapter of the collective novel and all of the completed chapters will be posted online at www.piquenewsmagazine.com/collectivenovel/.

Kevin Damaskie moved to Whistler in 1992 in pursuit of cold, deep powder and hot stories to foster his budding journalism career. About a millisecond after he arrived, he realized Whistler was the best community in the world and started building a life in this wonderful valley. He has worked as a reporter at the Whistler Question, helped design and launch Pique Newsmagazine and been published in Powder, Skier and Ski Canada magazines. He’s currently working as the Sustainability Coordinator for the Resort Municipality of Whistler.