Sacred, 1,600-year-old bowl to be displayed at SLCC 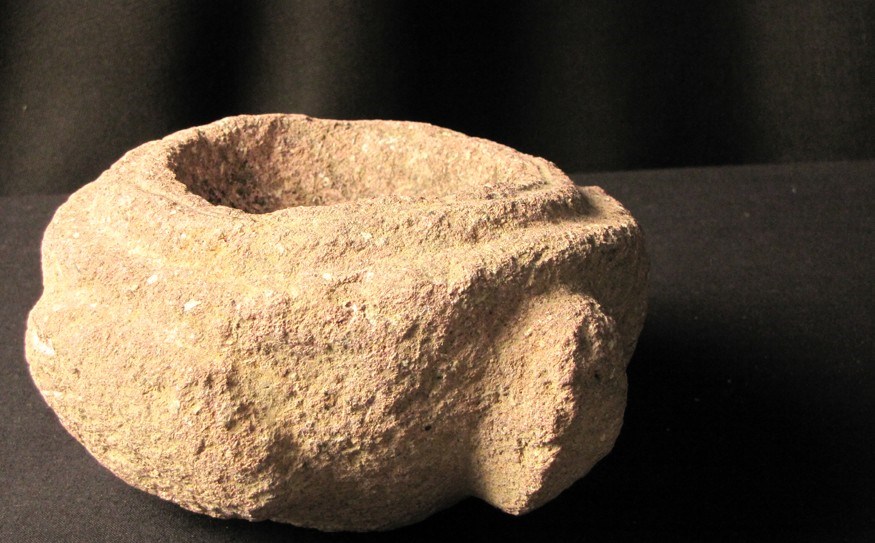 pieces of the past This 1,600-year-old sacred bowl is one of the pieces in the SLCC's upcoming exhibit. Photo submitted

Just over a year ago a Simon Fraser University geologist, and a graduate student, were down by the Squamish River studying cut banks when they made a discovery.

The geologist had some experience with archeology and his eye was suddenly drawn to strangely coloured sediment. It turned out to be the remains of a fire pit. Investigating further, the pair noticed a rock jutting out from the bank. "They started picking away at it and out popped a bowl," says Rudy Remier, an archeologist at SFU and a member of Squamish First Nation.

The pair who made the discovery immediately contacted Reimer, who returned to the site for an excavation to explore the area where the bowl had been found. This particular site was rich with information that could be explored to learn more about the bowl and how it was used. The charcoal remnants for example, found as part of the fire pit, were used for radiocarbon dating to determine the bowl's age. "Studying the sediments that surrounded the bowl and fire pit in a lot more detail we could also recover plant remains used by those people around the fire pit when the bowl was used," Reimer says.

Using x-ray fluorescence, a non-destructive technique to get the "chemical fingerprints" of a material, he could also explore the chemical composition of the rock and trace it back to the lava flow from which it originated.

"It's definitely exciting," Reimer says. "These stone bowls are fairly rare. They do occur up and down the coast and into the interior, but, over the years, since the Europeans showed up, these have been found and collected by non-archeologists or amateur archeologists. What is really lacking in our understanding of them is what we refer to as the archeological context — where something specifically was found is the true value of any archeological find."

But it wasn't just the bowl that the team discovered. There were also various stone tools around the pit made out of rock from the upper Cheakamus River. "1,600 years ago, people would've gone to a different location seeking that kind of stone and brought it back to the area where it ended up," Reimer says.

Those unearthed findings — along with the prized sacred bowl — will be featured in an exhibit called Pieces of the Past at the Squamish Lil'wat Cultural Centre, beginning with a blessing ceremony and exhibit launch May 16, starting at 1 p.m. It's a significant exhibit for the centre for various reasons, Reimer says. "Being from Squamish Nation myself, a lot of times exhibits or displays are (shown) in places that are separate from the community from which they derive," he says. "It's really exciting. Another emerging (trend) in archeology across North America is to blend our scientific knowledge with indigenous knowledge... It's about science, but it's also about helping revitalize culture and educate people in the public, showcasing it in a place where a lot of people will be able to see it."

The exhibit is also important to the centre because it's among the first to feature such old, rare pieces, rather than newly created art or implements. Alison Pascal, an aboriginal ambassador who has been part of installing the exhibit, says her favourite piece is a rare transformer rock that was discovered by a Nation member who turned it over to the centre near the end of his life.

"(Transformer rocks) are attached to a lot of creation stories, so they would transform people into animals or mountain ranges," she says. "The stories are retold to children so they can learn the morals and the values... It's something left behind as a marker for us to talk about and to pass the story on. We talk about the transformers in some of our regular tours, but it's all about pieces we created to show our guests. It's really nice they can see something left behind."

While the total number of pieces featured in the exhibit hadn't been finalized by press time, Pascal says the show will include rocks and tools borrowed from the Sunshine Coast Museum. There will also be bows and arrows, rocks for grinding up medicine and knives on display. Some of the stones that were used as knives and scrapers were discovered on the Squamish riverbank and were probably tied to salmon, like the bowl, Reimer adds. "They were probably used to process and butcher salmon coming up the river. We can look at the edges of these stone tools and the kind of wear tells us what those implements are used for," he says.

Big picture, all of the discovered items help piece together more evidence about what this area was like 1,600 years ago. "What's also really fascinating is that the area of the river was an ancient village," Reimer says. "Oral history and place names from Squamish culture show that almost 2,000 years ago the ceremonies, like the salmon ceremony — an important cultural event every year to welcome the salmon back to the watershed — was likely something that was going on back then. It's the layering of scientific and cultural knowledge together that makes it a more fascinating story."