Shredding and surfing - a tale of two towns 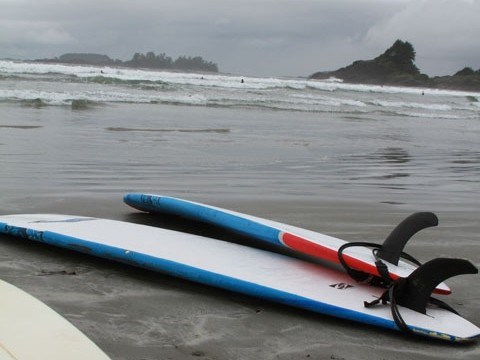 When Whistler based pro snowboarder and Sandbox Helmets founder Kevin Sansalone wants to chill out - literally - he packs up his surfboard and heads for swell season on B.C.'s west coast. Sansalone started surfing seven years ago north of Puerto Vallarta, Mexico and has been regularly travelling to Tofino since 2008.

"I always thought it was going to be too cold but when I got out there and jumped in the water I was blown away at how great it was," says Sansalone. "Wetsuits are so good these days so you don't feel the cold water too much. I mostly go out from the spring until the fall so the air temp isn't too harsh."

Sansalone loves the simplicity that surfing offers, unlike snowboarding and filming around Whistler where the veteran video producer is often travelling with a posse of snowmobile-propelled cameramen and pro riders. Alas, surfing is purely a recreational pursuit for Sansalone.

"It is by far the most difficult board sport and I am still at the bottom of that very long learning curve," he says. "When I have a bad day in the water it does get a little frustrating and I sometimes wonder what the heck am I doing out there."

But just as Whistler is more than just riding powder, Tofino is more than sand and surf. And while the locals may be quick to point out the differences in both towns, the two may have more in common than first meets the eye.

Sansalone says of Tofino: "The town is amazing, for sure. It's a lot like Whistler in many ways. Both places have a great core scene of riders who are friendly and support each other. We are all living and working in these towns and are fully absorbed in the atmosphere and activities that we love to do. That vibe is shared by people in both places."

Head into the Long Beach Surf Shop and you'll find bumper stickers with the slogan: "Whistler is THAT way" - with "the way" being shown by an extended middle finger.

While a lot of Whistlerites are enamoured with Tofino, many Tofitians view Whistler with a mixture of bemusement, or even horror. In the same way that "Disneyfication" is tossed around by various critics of Whistler who bemoan its reliance on chain stores and summer crowds, "Whistlerization" is used by Tofino locals to most definitely describe what they do not want their town to become.

Tofino's past bears a strong resemblance to Whistler's, especially during the 1960s with the influx of American draft dodgers and back-to-the-landers who were simultaneously attracted to Clayoquot Sound's natural beauty and its end-of-the-road freedom. Like Whistler, an RCMP presence was spotty at best back then and the west coast of the Island became a vital link in the narcotics trade.

Tieleman's father (including his brother Bill, former NDP party strategist and anti-HST activist) moved the family to Tofino in 1971 and Tieleman has worked locally as a commercial fisherman and is currently an art dealer. He started his Tofino News blog in 2008, and a study of the contentious issues that face the town reveal a lot of the same passions that are evident in Whistler, or any resort town where new residents want the town locked up once they're firmly ensconced.

"Once the logging and fishing dried up, we thought we'd try tourism," he notes rather dryly, "thinking that we could charge all of those tourists for a place to stay. Well, we didn't count on 'em buying up all the property around here. It's turned into the kind of town where you can get an eight dollar latte, or whatever, but you can't buy parts for your fishing boat."

Whistlerite Ross McGaw owns a condo on South Chesterman and has a lot of familiarity with recreational property throughout British Columbia in his role as real estate marketer for places like Predator Ridge in Vernon and Spirit Ridge in Osoyoos.

"Tofino's remoteness makes it truly special, but at the same time we never go over there in the summer months," says McGaw. "Like Whistler, it's just too busy. That's when businesses in both towns are going all-out. But I would bet that when I do go over, whether it's in spring or fall, that I'll run into people from Whistler on the ferry more often than not."

Commercial fishing and of course forestry - an economic activity that pretty much came to an end after the infamous "War in the Woods" to save Clayoquot Sound from logging in the mid 90s - supplied plenty of jobs.

"A lot of the old timers have a reticence to embrace tourism," says McGaw. "A lot of people in Tofino likely think that Tofino hasn't changed whereas Whistler has sold out."

And increasingly, Tofino may have to evolve as well.

From a Whistlerite's perspective, however, it still has that authentic, small town feel.

"I think Tofino has more of a hometown community vibe to it," says Sansalone. "Not having Starbucks or other franchises is pretty cool. I love going to the small coffee shops and restaurants that are locally owned and operated. Whistler is just bigger and more accessible to more people so it naturally had to expand. Maybe that will happen in Tofino one day, but I hope not."

The current president of Tourism Tofino is Perry Schmunk, who was ski school director at Blackcomb Mountain during its explosive expansion years in the early 90s until 2000.

"We went from 50 ski instructors when I arrived to over 500 ten years later, so I know all about growth," he says.

"In the years when Whistler and Blackcomb were competing against each other, there was a real spirit that you could try just about anything to beat out the other guy," he says. "By the time I left, a lot of the fun had gone out of it. The culture was getting very corporate. I still don't think that theme park models like Disney and Universal studios are transferable to the ski industry. Today's visitor wants some authenticity."

And that's something that Tofino can offer in spades.

"We're at the end of the road, there are no chain stores, a Starbucks is not the first thing you see when you enter town," says Schmunk.

Schmunk is general manager of the Long Beach Lodge, a 61-room hotel that positions itself as a bit of a high-end surf hotel, though the fabulous Cape Cod style cabins and outdoor hot tubs are a long, long way from camping in an old VW van. Indeed, the resort's Cox Bay surf cam is likely viewed by way more surfers than it is by Lodge guests.

The Lodge is even in expansion mode. Later this year it will break ground on a brand new surf centre with hot showers, lockers, a special washing machine for cleaning rental wetsuits, and a school where students can view video footage of their surf lessons. Surf purists may snivel, but Schmunk is smartly moving into a niche that takes the hundreds of surf lessons offered by local schools to another level that's not unlike the lucrative trade in private ski lessons he fostered at the Blackcomb Ski School.

"I love running this hotel against great competition," he says. "One strength we have is that there are very few strata hotel properties here in Tofino. We're not overbuilt and I believe that small businesses, whether they're restaurants or surf shops, can compete against each other and make a profit because the lease rates are affordable and you're not just dealing with one or two landlords."

Interestingly, if surf culture isn't really your thing, then Schmunk will send you over to one of his competitors like the Pacific Sands Resort or the Wickanninish Inn.

Ah, "The Wick" - Travel and Leisure magazine's top-rated Canadian vacation property, and the only one to crack the top 25 internationally. The opening of the Wickanninish Inn on Chesterman Beach was a true game-changer for Tofino, perhaps comparable to the opening of the Fairmont Chateau Whistler. But rather than being part of a major international chain, The Wick was developed and operated by a true pioneer family, that of legendary bush doctor Howard McDiarmid, who for many years was the town's only physician.

Heavily influenced by First Nations Coast Salish iconography and located on a spectacular jutting rock where breakers crash and spray the windows of the dining room, The Wick is the kind of resort that attracts well-heeled visitors from all over the world, at all times of the year.

The whole "winter storm watching" season was successfully marketed by the Inn in its first season, and nowadays, many regular visitors to Tofino don't really mind if the weather doesn't cooperate. Indeed, storm watching and winter surfing is what keeps Tofino's 1,700-odd residents from moving elsewhere.

For Sansalone, Tofino is a great place to visit but he's not ready to trade in his mountains for the ocean.

"I could definitely see trying to live a 50/50 split between the two towns, but wouldn't want to be in Tofino full time," he says. "I like the resort scene and the mountains too much.