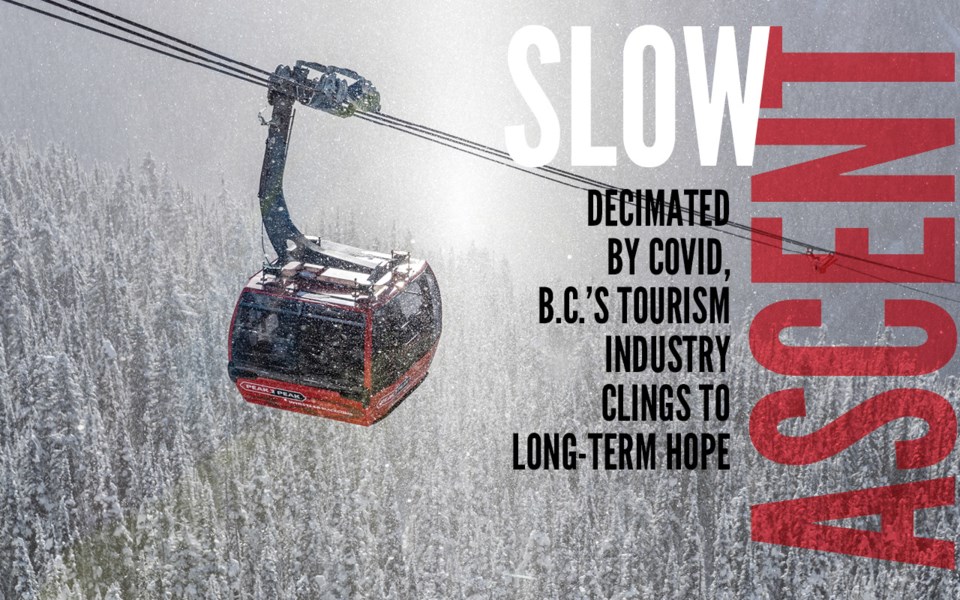 It’s a beautiful sunny day in late November, 2020, and I’m standing outside the TOTA & CCCTA Tourism Institute, steeling my nerves to enter.

People walk slowly back and forth in front of the building, though they don’t appear to be going anywhere in particular.

I take a deep breath and head inside.

More nondescript conference attendees are milling about the main lobby, emanating the same aimless-yet-purposeful vibe as their peers outside.

They don’t seem to notice me—might even be actively ignoring me, in fact—but I’m OK with that.

Though I have a vast collection of nametags and lanyards from conferences near and far, the thought of heading into large conference centres or hotels filled with hundreds of networking, mingling, war-story-swapping professionals always gives me anxiety.

So in a way, this particular tourism summit—held entirely online—is perfectly suited for people like myself (that is to say, reporters interested less in the schmoozing and more in the learning).

Hosted by the Thompson Okanagan Tourism Association (TOTA) and the Cariboo Chilcotin Coast Tourism Association (CCCTA) on Nov. 25 and 26, the Summit was touted as an “invitation to build a better tourism industry, regionally, nationally and globally, by learning together,” with a theme of “Moving Forward Better—Recovery, Resiliency and Regeneration.”

Attendees of the virtual summit were invited to click their way through the aforementioned virtual conference hall (complete with vendor booths, an auditorium and even a “networking couch”) to access panel discussions and Zoom lectures from dozens of industry insiders.

To fully replicate the experience of attending a real live conference, I click around the edges of the virtual lobby in my browser—completely skipping over the networking couch and vendor booths—hoping nobody will notice me.

When I inadvertently click on an auditorium session that is both painfully dry and completely irrelevant to anything I’m writing about, I simply close the meeting, free from committing the cardinal conference sin of the awkward, mid-presentation goodbye.

The next talk I enter is much more engaging, and (having yet to shower, or advance beyond my sweatpants, keep in mind) I crank the volume, fire up my recorder and wander into the kitchen to make coffee and a snack while I learn about the concept of regenerative tourism.

While many will no doubt prefer in-person conferences, there are clear benefits to living in the future, I decide.

Destinations like Whistler had best hope virtual conferences don’t become the norm as they forge their post-pandemic recovery—prior to COVID-19, conference business made up about 20 per cent of all winter room nights, rising to 30 per cent in the spring, summer and fall, according to Tourism Whistler president and CEO Barrett Fisher.

The format of the virtual Summit was innovative and creative, Fisher said, but she doesn’t see it replacing destination conference business anytime soon.

“I think it was incredibly successful, but then when we look to the long-term of meetings and meeting in person, I would argue that those kinds of formats will likely not replace that human engagement,” Fisher says.

There are a few factors at play though, she reasons: while platforms like Zoom offer efficiency and reduced costs, nine months into the pandemic, the burnout is real.

“How many people do you talk to that say, ‘Oh, I was in back-to-back Zoom meetings?” Fisher says.

“So I think that everything is about balance. I think what technology will do is it will increase the expedience of information sharing, but I don’t believe it will replace the benefit of networking and human interaction.”

In fact, Tourism Whistler is seeing more growth in future conference business, with contracts being signed “as we speak,” she says—enthusiasm spurred on by encouraging news about vaccines.

“Our conference sales team is in discussions with hundreds of meeting planners,” Fisher says, adding that while there has been some “preliminary interest” over the last six months, there had been no confirmed bookings—until the vaccine was announced.

“We’ve recently booked approximately half a dozen very large conferences that we’re looking at for 2022,” she says, adding that all of them are new clients rather than returning.

THE ‘REAL’ STATE OF THE INDUSTRY

Clearly, there is optimism for the future—a proverbial light in a metaphorical tunnel of tourism revenue.

And let’s face it: People will always want to come to Whistler, once they’re allowed.

But for the operators on the ground, locally and across the province, the urgency is real, said Destination Canada president and CEO Marsha Walden, in a presentation at the Summit.

“I try my best to make sure we’re getting a dose of reality, and frankly, there’s just no sugarcoating the situation: the picture, as you all know, is shocking,” Walden said.

“Our sector is in very dire straits. And for much of our industry, it’s not only dire now, but it’s continuing to deteriorate.”

Canada is at risk of losing almost half of all its tourism jobs in 2020, Walden said.

“And these are direct jobs; they’re specifically tourism jobs,” she said. “It does not include all the indirect jobs that the tourism supply chain also helps support.”

Further, every quarter that the border remains closed adds another year to the industry’s recovery time (back to 2019 levels) Walden said.

While the tourism industry has done an outstanding job of adapting to COVID-19 safety protocols—perhaps naturally suited for it, given the guided and structured nature of the work—there is still work to do to build confidence in the public.

“When the borders reopen and when mobility is once again encouraged, I can’t emphasize enough how important it is for all of us in the industry to be very clear about the safety protocols we have in place,” Walden said.

“There’s still a great deal of uncertainty among Canadians and other travellers around the world. We need to continue to hammer home that message [that] we’ve made significant investments and we are ready to host.”

Some pockets of the province—such as the Okanagan and Tofino—have done reasonably well in spite of things, said Walt Judas, CEO of the Tourism Industry Association of BC.

While both the federal and provincial governments have offered support for businesses throughout the pandemic, keeping entrepreneurs solvent remains a dire concern.

“We just cannot get to the other side of COVID-19 and start to see the tourism sector recover without businesses actually remaining solvent,” Judas said.

“Many of them have already closed shop—some permanently, some on a temporary basis—some are really on the brink of folding.

“So how do we ensure we give them the help they need?”

In the weeks following the conference, a provincial Tourism Task Force (of which Judas is a member) submitted its final report to the government.

Around the same time, the federal government announced the new Highly Affected Sectors Credit Availability Program (HASCAP)—a new program for the sectors hardest-hit by COVID, like tourism and hospitality, hotels, arts and entertainment.

On Dec. 8, new provincial tourism minister Melanie Mark announced how $53 million earmarked for tourism recovery will be spent: $19.4 million to support tourism-dependent municipalities to build, adapt and diversify their tourism infrastructure; $13.6 million for all six B.C. tourism regions to work with government to identify projects to create jobs and attract new businesses; and $20 million to develop local tourism experiences, infrastructure and services.

But for many tourism operators in B.C., the relief simply won’t be enough.

In late November, longtime Whistler locals’ haunt Three Below closed its doors due to COVID.

“Certainly it was a little bit too late,” owner Priyanka Lewis told Pique, of changes to the federal commercial rent subsidy program that might have saved the business.

“Obviously now the rent subsidy has moved into the hands of the tenants, and I think if that was the case from the beginning, we would have made it at Three Below.”

A year ago, the big, troubling topic amongst tourism types was “overtourism”—the swarming of our precious and priceless outdoor amenities to the point that they’re destroyed, or otherwise unable to be enjoyed.

“And who would have imagined that in the space of a few weeks, all the growth that international tourism has enjoyed since 2003 would literally be wiped off the map?”

The devastation is enormous, and can’t be understated, Pollock said—and all caused by a tiny, invisible microbe.

But what can we learn from it?

“I believe the answer to that question, actually, lies in how we see it; how we frame this event,” Pollock said.

“Do we see COVID-19 as an enemy, a pathogen that has to be eliminated at any cost? Or do we see it as an opportunity just to stop, slow down and reflect and, more importantly, notice how quickly nature can repair itself when we humans stop our frenetic activity and give it a little space?”

The concept of regenerative tourism envisions a shift away from “death, draining and extraction” to “life, vitality and thriving”—in other words, away from conventional “extractors” like fossil fuels, excess consumption and drugs to “stewards” like sustainability.

The key takeaway, in Pollock’s view, is this: “If sustainability is doing less harm, then regeneration is about developing the innate capability of a system to self-organize, thrive and evolve,” she said.

It’s about creating the conditions for life to flourish, in the broadest sense of the word: individually, as well as in communities and businesses.

Key to it all is to change how you see a destination, “to begin to see it as a living system, and all of the interpretive dimensions within it,” she says.

The concept isn’t new to Whistler—many of its key fundamentals can be found in Tourism Whistler’s recent place-branding exercise, Fisher says.

That work, which culminated in the new Thrill Runs Deep campaign launched in October, “was really our foray into not only sustainable and responsible tourism, but then also looking to the future for regenerative tourism, so all of those topics are super interesting to us,” she says.

When it comes to Whistler’s own COVID-recovery, the long, slow ascent back to the top of the tourism mountain is just beginning.

“We’ve got a long ways to go still, and our business community is having a tough go of it right now, but I think we recognize that there is hope on the horizon with vaccines and rapid testing,” Fisher says.

“And so really it’s about how we maximize the opportunities as they arise, and how we welcome visitors back in a safe manner to ensure that it keeps our community and our visitors safe, and I think all of our businesses are doing a phenomenal job with that.”