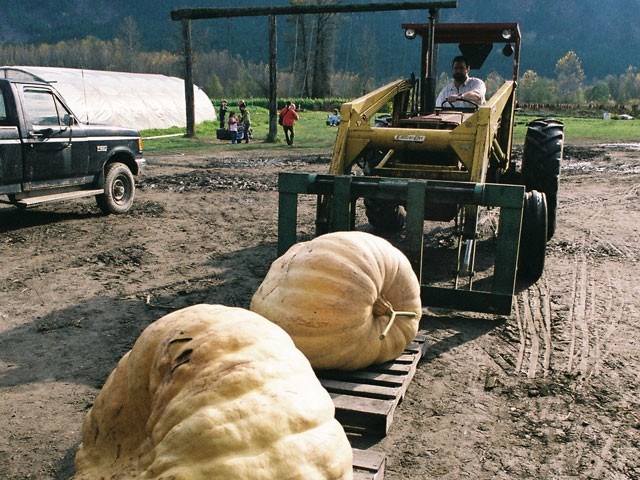 Pemberton Pumpkins are so big they must be moved with a tractor.

Despite allegations of doping and genetic modifications, there was no evidence last month that Chad Gilmore’s giant pumpkin had been improperly interfered with in its quest for super status.

Sure, 890 pounds is a record-sized pumpkin even for Pemberton Valley’s champion giant vegetable grower, and granted, as the forklift lowered the winning behemoth onto the scales it did look more like Jabba the Hut than any squash I’ve ever eaten. But Gilmore swears its supersized girth was simply a matter of good growing conditions.

“There was definitely no doping!” Gilmore says. “There’s no genetic modification. I mean, you do select for seeds with the thickest walls, the best shape, you find the desirable traits… but really, the secret is good soil.”

Good growing is Pemberton’s defining quality — and that fecundity seems to extend beyond the fruits of the earth, with 57 babies plus four sets of twins born just this year.

Since his early days in Whistler 12 years ago, working in the kitchens of Araxi and La Rúa, to his current business at Whistler Cooks, Cousar has been working with Pemberton produce, from celeriac to banana fingerlings to blueberries to beef, and building relationships with local growers.

At first, it was because he wanted the best. “I wasn’t as emotionally married to this community as I am now. I was young and I just wanted to work with the best food. I didn’t care if that meant raping and pillaging some little village. I wanted the best and I got it. Then I got to know the people, and my backyard, and became more aware of the social impacts,” Cousar says of a growing politicization about food which has seen him become a leading member of the Slow Food Whistler conviviality.

The backyard he became aware of produces an estimated 12,000 tonnes of seed potatoes a year, in addition to other produce, with almost the entirety of that potato seed leaving the valley for far-flung destinations like California and Idaho.

Meanwhile, Cousar estimates there are between 30 and 40 food service delivery trucks a day driving up Highway 99 to stock Whistler’s kitchens, taking $150 to $200 million a year in food services sales back to Vancouver and the head offices of Sysco, Coca Cola, Neptune, Lays and other multi-national companies.

This globalization of the food network, says Resort Municipality of Whistler Sustainability Coordinator Kevin Damaskie, has happened in the few short generations since the 1930s. “There’s really a heightened awareness across the board that we’ve moved from a community food system to a globalized food system. In the pursuit of large scale efficiencies and profit, that global food system has undermined people’s ability to be as healthy as possible, and we’ve also impacted communities, society and the environment,” he says.

The cumulative effect of those impacts has recently seen a revived interest in eating closer to home, with a growing consumer buzz about local food, and a policy trend toward supporting community food systems.

“The least distance your potato travels from the farm to your fork means the least negative impact it’s had on the globe,” says Damaskie. “We may be in the time and space that we’re considering things on that level.”

This growing appetite to eat local — for food with fewer frequent flyer miles than the diner, and whose provenance can be vouched for by a grower whose personal integrity is on the line if an “improper interference” is established — infuses the season of the harvest in Pemberton. After all, most people are only one degree of separation away from a farmer.

From pumpkin weigh-offs and carving contests, to neighbours sharing the excess of their backyard bounty, to 100 Mile Thanksgiving Potlucks, to families pooling resources to buy local beef, the celebration of the season of harvest is pretty earthy in Spud Valley. This proximity to the fruits of the earth was noted when Vancouver Coastal Health and Sea to Sky Community Services partnered last year to develop a Community Food Action Initiative. An Olympic legacies project, the CFAI was essentially a gap analysis geared to establish what each Sea to Sky community’s assets and needs were in order to achieve food security.

Food security was defined by the Initiative as the availability of good, affordable, culturally appropriate food on the table, now, and seven generations from now. The B.C. Food Systems Network calls this a sustainable food system — where a consumer can access food, a grower or supplier can make a living producing it, the planet retains its productive capacity for future generations, and the cultural, spiritual or life-affirming aspects of food are celebrated.

The initial survey involved forums in Squamish, Whistler and Pemberton, followed by a two-day Open Space event, geared at identifying and brainstorming specific responses, during which it became apparent how many different interpretations of food security there are, depending on one’s postal code, income, or knowledge.

Says Karen Clarke, Community Developer Sea to Sky, Vancouver Coastal Health, of the resulting report, “We need to recognize foremost that these communities in the Sea to Sky corridor are drastically different from each other. Pemberton has farming, First Nations and a much more earthy focus. There was a lot of talk in Pemberton about having the ability to supply the corridor with food.

“Squamish was, at one time, a farming area, and there’s been a bit of a revival in that lately. But we have a significant population. We’re the transportation gateway to the corridor,” says Clarke. “And the other issue in Squamish regarding food security is the low-income population, the poverty and homelessness.

“Whistler’s needs, really, are looking at avenues for being a positive role model, heading towards eating organic, eating locally, eating well, or healthfully.”

Whether food security means accessing the soup kitchen or food bank when you need to, being part of a community of backyard gardeners who share tools, extra potatoes and planting tips, or trying to develop a high-tech greenhouse, what was apparent during the Community Food Action Initiative was that food is an issue that is intimate to us all, regardless of postal code, income, or know-how, and that a corridor-wide collaboration brings a great variety of strengths to the table.

All the more reason, agree Cousar and Clarke, for a food strategy to be enfolded into Whistler’s comprehensive sustainability plan.

“Any document about sustainability that doesn’t include food as a number one priority is maybe not really the cycle of economy that it should be. Food is our daily bread,” says Cousar, “and it’s a staggeringly frustrating economy because so much of our North American market is built on cheap crap. If you look at the way we spend our money, proportionately, over the decades and across the continents, North Americans today spend less money as a percentage of their income, on food, than any other people in time or space.”

It’s that economic prospect that Damaskie sees as being one of the biggest opportunities in developing a sustainable community food strategy, an outcome to be pursued via a newly-struck Task-Force of the Whistler 2020 process, with the first three meetings planned for November, including one, ground-breakingly, in Pemberton.

“A food strategy is a huge opportunity for W2020 to understand the value of regional partnerships,” Damaskie says. “Whistler has little capacity to produce food at this time, but a massive capacity to support food producers. Pemberton has a real and historical commitment to food production. If we can match the production capacity with marketing and distribution, we create a huge economy, and the value is not 30 tonnes of potatoes leaving the valley at a dime a pound, but weekly pickup truckloads from root cellars and farms throughout the valley, up and down the corridor at $2.50/lb.”

The Year of the Potato

In the wake of Professor Atkins and the Irish Famine, the potato has suffered an image crisis. But 2008 could see a swing in the fortunes of the humble spud. The United Nations has declared 2008 the International Year of the Potato, in recognition that the tuber, once venerated by the Incans, is one of the world’s key staple crops, particularly in mountain communities.

Tucking into a locally grown spud after a morning of ripping the slopes might be the most authentic mountain experience Whistler could offer, with a neat little message of sustainability to boot.

It’s just a question of packaging the message.

As French military chemist, Antoine-Augustin Parmentier did, in 1785. Commissioned to find a food capable of “reducing the calamities of famine”, Parmentier persuaded the King of France to plant 100 acres of spuds outside Paris, conspicuously guarding the field with armed soldiers. When the guards were allowed to go off duty, as part of Parmentier’s master plan, the local peasants saw an opportunity to nab something that was clearly of great value, treating the contraband potatoes like gold, and propagating them throughout the country.

Says Damaskie, “That logic is exactly what we can do with a local community food system. We have gold here. It’s been under our noses the whole time. We’ve just never realized. If we, as a society, can connect ourselves to the food we eat, we’ll be enhancing our economic opportunities, our social systems, and addressing aspects of the food system that cause environmental degradation. And that is true sustainability.”

And so Whistler, with the Year of the Potato around the corner, has the chance to be a poster child for a different food story.

Karen Clarke sees this as an exciting development. “There are so many things going on at a political level that are impacting farming right now. Border regulations, abattoir regulations shutting down small local producers. We’re totally heading down a road towards large meat production only. And we have a farming community in this corridor that we need to protect and promote. And that is all of our responsibilities.

“What Whistler is doing, in establishing this Whistler 2020 Food Task Force, is progressive. It’s great. They’re very mission-driven at this stage, so to recognize food security as a priority and to tie in the work that has been done is fantastic.

“And they have the ability to tie it into a bigger level. People will look to them as an example. Yes, the food task force is a grassroots process, but the little work you do in your little town can go really huge. Whistler can totally be seen as a leader in food security and community food strategies.”

The harvest table is a potent symbol for North Americans. We gather around it, we offer thanks, we brave airport chaos and crazy roads to visit with family for Thanksgiving celebrations. We eat and drink until we have to lie on the floor and rub our bellies. We take our cornucopia for granted….

But the warnings are being sounded now. A globalized, industrial food system has made us vulnerable to the price of oil, to unsustainable farm practices, to genetic modifications, to large-scale crop failure, to contamination of the processing chain….

We need to act to preserve the table. And the first order of business is to set it for a feast of ideas, to be shared across jurisdictions and regional boundaries, across postal codes and income levels, by a group of Whistler, Pemberton and Mount Currie grocers, truck-drivers,  purchasing officers, planners, nutritionists, marketers, chefs and farmers....

And when we plan together for this table of plenty, now and seven generations from now, we work towards a truly sustainable harvest.