The best idea ever

Record sales at Re-Use-It Centre funding community service
May 14, 2010 5:25 AM By: Clare Ogilvie 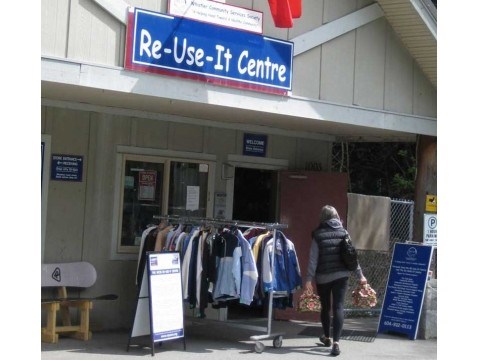 About to be released financial figures show that Whistler's Re-Use-It Centre is more than just a feel-good idea.

"It is one of our most talked about successes in the sustainability work we have been doing," said Whistler Mayor Ken Melamed.

The idea for a Re-Use-It Centre goes back to the late 1980s, said Melamed, recalling that as a member of AWARE he helped the newly minted organization present the idea to the Council of the day.

While it was widely regarded as a good idea it languished for years. With the Cheakamus landfill still in operation an underground operation existed with people combing the dump for recyclables and things that could be re-used.

"There was a lot of re-usable stuff there," said Melamed.

"These people would make it their job to go through the dump."

The practice was not endorsed so a way had to be found to legitimize it, he said.

Today local governments across Canada are looking at ways to reclaim waste, and Whistler's Re-Use-it Centre stands out.

"It is definitely a model that I think municipalities should look at," said Melamed. "In the city (Vancouver and others) they have some similar services... so I don't think it is the only way, but for Whistler it was a logical fit."

After operating costs of about one third are subtracted the rest of the $650,000 will go to fund a myriad of services for Whistler through the Whistler Community Services Society (WCSS). The funds support everything from youth outreach, to a green house project, to kids sports and the well-used food bank.

"We would not have been able to grow our agency to match the community needs without it," said Greg McDonnell, executive director of the WCSS. Recently the Re-Use-It Centre celebrated its 11 th year in operation, including two renovations to expand the space to keep up with demand.

McDonnell believes that having a strong revenue source not reliant on government grants is becoming more and more necessary as funding sources for non-profits like the WCSS dry up.

"We were ahead of our time establishing this and now you are seeing big municipalities and groups getting behind the idea because they see the viability," said McDonnell.

For WCSS the impact is much more than financial. The success of the Re-Use-It Centre has created a web of involvement for community leaders. Now WCSS staff sit on committees tackling issues like waste management, affordability and livability, creating an overlap of knowledge and creativity that the whole community benefits from.

"As an agency it gave us a legitimate seat on committees that went beyond health and social service delivery, which is our agency's mandate," said McDonnell.

"All of a sudden we are participants on the materials and solid waste strategy of our community as well as resident affordability and so on.

"It really gave us a chance to articulate our mission of social sustainability."

Not only does this type of operation cut down on the money governments have to provide for social services, it also cuts down on the amount they have to spend to process their mountains of garbage.

The Re-Use-It Centre, which employs nine full- and part-time employees as well as a host of volunteers, takes in clothes, toys, utensils, furniture, electronics and more. Staff then sort it for sale, for auction or for diversion to recycling or other agencies which can use the goods. Last year it provided 69 tonnes of used goods to other Sea to Sky charities.

The centre is located in Function Junction at a recycling depot where people can also drop off their garbage, recyclables and now compost.

"You never know what kind of gems you are going to find in there," said McDonnell recalling the story of a shopper who bought a $40 ring only to find out later the diamond in the setting was real and worth $5,000.

Linda Armstrong isn't too worried about finding a treasure as she carefully scours the well-worn shelves and racks. The mother of two is busy looking at books, t-shirts and more for her family. Opposite the kids section are racks of shoes - some fancy, some well-loved, some just right. Behind the shoe rack are men's and women's clothes that have been carefully organized into shirts, jeans and so on. Beside those are shelves of dishes, cutlery, glasses, appliances and of course all the knick-knacks a thrift store would� never be without.

"I got ski suits here this year, when my blender broke I found one here for $12, and it works great, and I even found a CD player for my daughter's room for a fraction of what you would pay at (a big box-store)," said Armstrong.

"People just can't go on buying and buying new things when there is nothing wrong with the ones they have. I come here with my kids and I tell them we have to recycle, we just can't keep producing the amount of garbage we do."

The latest figures for diversion show that the Re-Use-It Centre kept 333 metric tonnes of goods out of the landfill last year.

It costs Whistler $110/tonne to send its garbage to a landfill in Washington State. The 2009 municipal figures show that 17,800 tonnes of waste was sent to landfill that year. Another 15,000 tonnes was recycled and composted. (The local bottle depot and the Re-Use-It Centre figures are not included in these stats.)

"Getting rid of our garbage nowadays is not a cheap thing to do, so if it can be re-used by somebody it is a huge savings," said James Hallisey, manager of environmental programs for the Resort Municipality of Whistler (RMOW).

Not content to stop with the Re-Use-it Centre, which also functions as the Electronic waste centre for Whistler (removing 82 metric tonnes from the landfill last year), the RMOW and WCSS are now planning to open a Re-Build-It Centre to recycle building supplies such as cabinets removed in renovations, plywood, nails and even appliances.

"The construction industry does try to recycle but they do get stuck frequently where they have to get off a site in a hurry and if they can't find a home for it, it goes in the garbage," said Hallisey.

"I have seen crazy things going though our transfer station like palettes of plywood. It is terrible to see.

"It costs them money and it costs us money because we still have to send it away."

They are partnering with the Sea to Sky Chapter of the B.C. Home Builders Association to get the new Centre open this fall. WCSS has been saving for the $150,000 steel frame, heated and insulated, 3,000 square foot building for about five years.

"We do support the Re-Build-It centre with all the renos we do," said Axel Schreyer, president of the Association.

"It is a great thing when we don't have to throw stuff in the dump. It is a much better way to recycle material. It will start with cabinets and 2x4s and things like that and the plan is to be more comprehensive as time moves along."

Annual Canada Day quiz
Jun 29, 2020 9:00 AM
Comments
We welcome your feedback and encourage you to share your thoughts. We ask that you be respectful of others and their points of view, refrain from personal attacks and stay on topic. To learn about our commenting policies and how we moderate, please read our Community Guidelines.