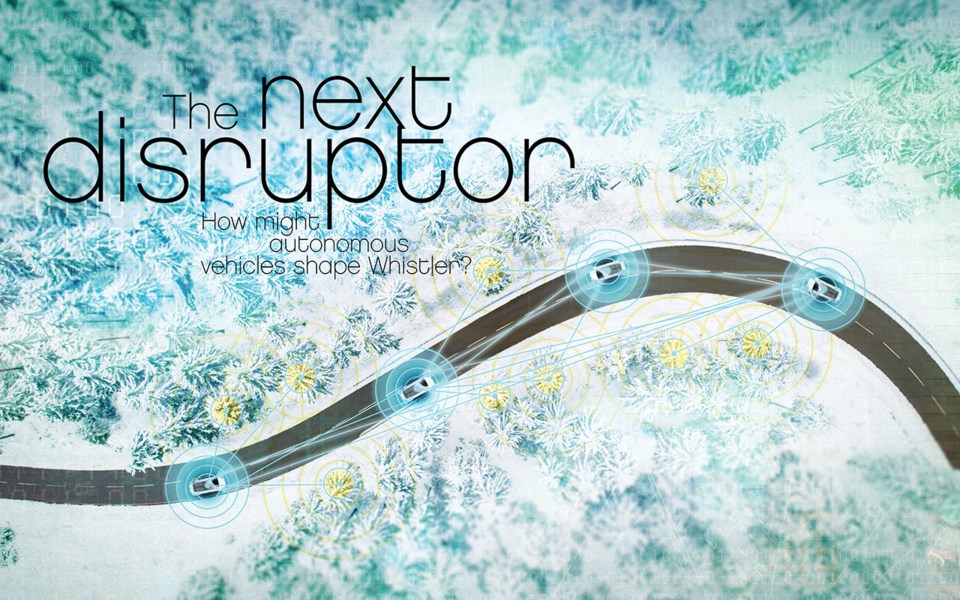 The next disruptor How might autonomous vehicles shape Whistler?
Throughout the course of modern human history, there have been key technological advancements or turning points that flipped society on its head in an instant—otherwise known as “disruptors.”

Think of things like the introduction of the shopping centre in the 1950s, and its impact on mom n’ pop Main Street, or how cell phones—and then smartphones—changed how we communicate.

Or the automobile, which appeared on the scene at the turn of the 20th century and had nearly completely eliminated the use of horses and carriages in major urban centres a dozen years later.

Today, some of the world’s most profitable companies are fervently preparing for the next great disruptor: the autonomous vehicle.

“Most people who’ve really thought about this think there is potential for pretty dramatic change in the way we live and work,” said real-estate economist and University of Alberta professor David Dale-Johnson at a Sept. 26 Whistler Learning Centre (WLC) panel discussion on autonomous vehicles.

“But there’s some challenges, obviously.”

Artificial Intelligence remains one hurdle (though it is improving rapidly), Dale-Johnson said, while others include things like adverse weather conditions, connectivity and consumer acceptance.

“Adoption is a big deal,” he said.

“I talked to a whole bunch of planners [and] city leaders in 2019; all of them said the big unknown is to what degree will people widely accept this—actually adopt the technology—and that’s a big unknown.”

There’s a term for the hypothetical future that might soon be hoisted upon us by the next big disruptor: Autonomous Mobility On Demand (AMOD).

The AMOD model envisions a future in which the average person doesn’t own his or her own vehicle, but can make use of an app to “summon” an autonomous vehicle whenever necessary—think Uber without the human interaction.

A colleague of Dale-Johnson’s at the U of A estimates the AMOD model could save households up to $20,000 a year, he said.

Of course, there is still a healthy skepticism in terms of AMOD feasibility.

The Society of Automotive Engineers has developed a ranking system for vehicle automation, Dale-Johnson said, weighted on a scale of zero to five—zero being no automation, five being full, with four constituting a “very high” level of automation that still allows the user to step in, if necessary.

While there are many Level 2 cars on the road today (the typical Tesla is a Level 2, Dale-Johnson noted), most cars would likely classify as a Level 1 (which include minor automated features like cruise control, for example).

“[Tesla founder and CEO] Elon Musk, he thinks we’ll be at Level 5 actually very soon; at the same time, the guy who runs Toyota’s research institute thinks we may never get to Level 5,” Dale-Johnson said.

The roadblock to full automation is uniquely philosophical, in a way.

“The issue is, if you’re following a vehicle and all of a sudden a mattress falls off the roof of the vehicle right in front of you, is the car smart enough—does it have enough intellectual capacity—to know what it’s supposed to do?” Dale-Johnson said.

Putting the philosophical conundrums aside, the adoption of the AMOD way would have profound effects on society. The most drastic would be less congestion on all roadways, far fewer accidents, and a sudden need for way less parking.

Entire neighbourhoods would change and likely further densify, as driveways could be transformed into laneway housing.

Whistler’s many parking lots might be redeveloped, Dale-Johnson said, with potential for more housing, parks or retail.

“Buried in here is how many people do we want to have in Whistler, but I think that’s a whole other panel,” he said.

Ski and bike lifts would have to allow for autonomous vehicle drop-offs, and the vehicles themselves would need to accommodate skis and bikes.

Autonomous buses or shuttles could operate between Whistler’s various neighbourhoods, as well as on the Sea to Sky from Vancouver, Dale-Johnson added.

“But given Whistler, I would guess there’s still going to be people with pickup trucks and snowmobiles, and preferences for their own vehicle to do those things, and there’s nothing in here saying that that’s not going to be possible or permitted,” he said.

Another question posed by the AMOD concept is one of privacy: do I want car companies to know my every movement?

Dale-Johnson gave the example of Barcelona, “one of the most wired cities in the world.”

There, the mayor simply said to the telecoms, “you can get this data, but it has to be non-connected to any individual,” Dale-Johnson said.

“We have to be able to deal with it in a way that maintains the privacy of the individual, from whom came the data.”

In promoting the WLC event, Whistler Mayor Jack Crompton, who served as moderator, found it hard to believe the words coming out of his own mouth.

“I was saying, ‘Come, we’re talking about autonomous vehicles and flying cars,’ and then I’d laugh, because it seems so unbelievable,” Crompton said.

But after a presentation from JR Hammond, CEO and founder of Canadian Air Mobility (CAM), the concept felt, ironically, much more grounded.

It’s a point Hammond has heard before.

“Anyone that has referenced the cartoon The Jetsons, where they’re flying around in those little pods? That’s actually here,” Hammond said, adding that CAM and other industry partners are actively working with regulators at all levels to make flying cars—or “advanced air mobility” (AAM)—a reality.

Advancements in both battery and hydrogen fuel cells have made vertical takeoffs and landings a possibility, Hammond explained—think drones big enough to carry people—which will reduce the need for ground infrastructure like airports, runways or expanded highways, and wildly transform the way people and goods are transported.

“We are looking at these vehicles carrying between six to 14 passengers, such that we have the economies of scale and those price points making it available for the general public, and not just for the upper one per cent,” Hammond said.

“While the majority of these initial vehicles will have a pilot onboard in order to satisfy the high degree of safety regulations that we already have for air transport in the country, there’s a movement to become autonomous as quick as our regulations and safety standards can be mandated.”

It’s tough to say when our new Jetsons reality will become commonplace, though Hammond noted there are a couple of companies in Canada currently going through their testing and certification process.

The regulatory aspect poses a steep ascent, with everything from noise and visual disturbance to pollution requirements to be considered.

“The really beneficial part is the drone industry has been working over the past decade and a half, [and] has painted a beautiful platform for us to build upon,” Hammond said.

“[But] point blank, we do not have any regulations that currently exist for this, so we are working hand in hand with Ottawa on developing them out in sync with the operational opportunities.”

In Whistler and beyond, AAM could have profound impacts.

Hammond points to search-and-rescue operations as one area of unique local interest.

“Having a natural, incorporated system through the mountainous areas, this piloted—and then very quickly autonomous—search-and-rescue opportunity showcases how additional human lives could be complimented by a vertical takeoff and landing vehicle similar to that of a helicopter, [but] with much more nimbleness, a quieter noise profile, and operating on a zero-emissions aspect,” he said.

The benefits to tourism are clear, as arrivals to YVR could board autonomous flights direct to Whistler, but there’s also broad implications for remote First Nations communities, Hammond pointed out.

“There is a massive opportunity for this technology that doesn’t require the ground infrastructure to start creating the connection pieces to deliver medical services … to areas that conventional ground transportation has been a strain,” he said.

For all the promise shown by autonomous vehicles, none of it will be fully realized without the advancement of 5G technology.

“This network is designed to connect virtually everyone and everything together, including machines, objects and devices,” said Peter Leathley, director of technology strategy with TELUS.

The way much of the network is built today, phone signals travel from towers to fibre optics, then to Downtown Vancouver before heading east to Toronto and south to Seattle, Leathley said.

With 5G, “we’re going to bring the data centres and the computation dramatically closer to the edge of the network … even though it’s going the speed of light, going to Toronto and back is still a bit of a ways,” he said.

“So that has a huge implication in terms of certainly the speed but also some of the privacy implications, as well.”

5G (the fifth generation of broadband network technology) is said to be up to 100 times faster than 4G, with lightning-fast reaction times and the potential for network slicing—crucial in ensuring autonomous vehicles are safe.

“So instead of all of the traffic related to, say, autonomous vehicles or the police or fire being on the same internet as everybody else, you can slice it so that people are on secure lanes, basically, so there’s no one else in your lane,” Leathley said.

“There’s some huge security implications there, but certainly an important thing to consider when designing wireless networks for autonomous vehicles.”

There is “a whole ecosystem of things that need to come together” to make autonomous vehicles a reality, Leathley added, including 5G wireless spectrum licensing at the federal level and widespread infrastructure upgrades.

Whistler is “really an interesting place” on that last point, Leathley said, as the upgrades to the Sea to Sky Highway completed for the 2010 Olympic Winter Games included a fibre optic cable for instantaneous video file transfer to Vancouver.

“So they built this fibre to be able to do that, and really overbuilt it,” Leathley said.

“So some of the infrastructure required in terms of Step 1, it is at least in part there, which is an important first step towards this.”

Driving a car is a complicated process, and drivers must be able to react to pedestrians, streetlights, and even the unpredictable at a moment’s notice.

“So if an autonomous vehicle is going to do the same thing, it’s got to have that same type of capability, and be able to do it in milliseconds, the same way that we do,” Leathley said, adding that in the pilots and trials taking place right now, autonomous vehicles are performing “dramatically” better than humans in terms of reaction time.

“[That] is where the safety element comes in: you don’t have drunk driving associated with autonomous vehicles; you don’t have people speeding way over the limit,” he said.

“So all of these sort of risky behaviours, autonomous vehicles are now dealing with, but you do need to have that capability in place so that the car can see or be aware of certainly the other vehicles, people and cyclists, and all these sorts of things.

“So that’s where a 5G network is a really important building block.”

Find a video of the full panel discussion at whistlerlearningcentre.com/course/av-event/

The exit interview
Sep 27, 2020 8:00 AM
Comments
We welcome your feedback and encourage you to share your thoughts. We ask that you be respectful of others and their points of view, refrain from personal attacks and stay on topic. To learn about our commenting policies and how we moderate, please read our Community Guidelines.