The Sick and The Fallen

How Canada weathered a deadly influenza at the height of the First World War
Nov 6, 2020 2:17 PM By: Brandon Barrett 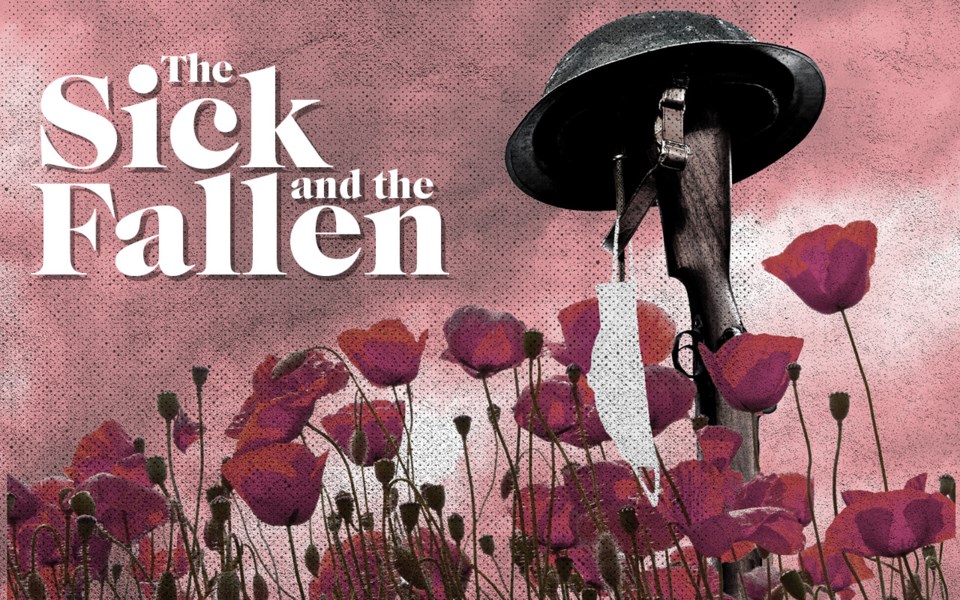 The sick and the fallen How Canada weathered a deadly influenza at the height of the First World War. Story by Brandon Barrett

In a letter dated July 21, 1918, Private William James Stares of Kingston’s 21st Battalion writes home to family while recuperating in an Allied British hospital. But it wasn’t a wound suffered on the battlefield that has Stares laid up in the small coastal town of Seaford—it was a debilitating flu that seemed to have only grown in scope and severity over the preceding months.

“I have been in Hospital, suffering with the latest epidemic, The ‘Spanish Flu,’ not a very nice thing to have,” he wrote. “Severe Headache, partial loss of legs, aches and pains all over, and feverish. For one week I just gazed at the ceiling, counting the flies, working out imaginary patterns on the paintwork, going through some of the Battles again, (in my mind) killing Germans by the thousands. The lad in the next bed thought it safer underneath the bed. (Suppose I was delirious.) I had to laugh when he told me about it.”

Stares was just one of the tens of thousands of Canadians, and millions around the globe, who contracted the so-called Spanish flu at the tail end of an already devastating war that had totally consumed the public’s attention. In all, the flu would claim an estimated 50,000 Canadians, numbers that were comparable, mathematically at least, to the more than 60,000 troops who died in combat. And despite Stares’ sense of humour on the matter, it’s difficult to overstate what it must have felt like for the scores of soldiers who had just spent years of their prime fighting in this treacherous, unspeakable war only to return home to battle a much less tangible foe.

At least on the battlefield, you knew who your enemy was. Amidst all the chaos and confusion, there is also a certain simplicity to war, especially a century ago. Your duties are laid out for you in meticulous fashion. Your purpose is clear: survival.

But a glorified cold? That was a harder thing to wrap your head around.

“I think there was probably confusion and a lot of fear, because the Spanish flu is invisible until it's taken hold of your lungs,” explained Dr. Lorne Hammond, history curator at the Royal BC Museum. “All the communities knew was there were these very disturbing stories in the newspaper—but how does that connect to where you live?”

Coined the “Spanish flu” because neutral Spain was the first country to cover the epidemic (journalists on both sides of the fight were discouraged from reporting on anything that could give their adversaries an advantage), the epidemic went largely unnoticed by the public when it first reached Canadian soil in the summer of 1918. By the time the second wave hit in the fall, thousands had died, devastating a domestic war effort that had already been hampered by half a decade of conflict. Food and fuel were in short supply. Women manned factories that were working 24/7 to supply troops overseas.

And yet, with more than 40,000 killed in combat and another 100,000 wounded at that point, the flu failed to make much of a lasting mark on the 8 million or so Canadians that remained at home.

“It was definitely seen as a health crisis, and that’s very clear from all the accounts. I think what’s a little hard to figure out is: why didn’t it resonate more? Why didn’t we document this more?” asked Dr. Tim Cook, director of research at the Canadian War Museum and author of 13 books. “Some of the impact and grief, I think, was lessened by the war. For individuals, if you lost your mother or your daughter or your uncle to the flu, there was no less grief there. But as a society, Canadians had been used to grief. For four long years, the terrible casualty lists were posted and the telegrams were delivered back to the families informing them of a loved one killed or lost. Canadians, I think, were more attuned to this mass death already.”

Canadians’ response to the health crisis was also impacted by the much slower stream of information 100 years ago. The first live transmission of a televised face wouldn’t happen until 1926, and radio was still a few years away from widespread adoption, so the public relied on scant newspaper reports and worrisome anecdotes from overseas.

Even government officials struggled initially to grasp the extent of the flu’s devastation.

“It wasn’t until somewhere around 1922 or ’23 that the government starts seeing proper numbers, in part because when influenza hit an Indigenous community on a reserve, that’s federal land and those numbers are travelling a different way to Ottawa,” explained Hammond. “So they didn’t really know what impact the influenza was having in Indigenous communities other than what they were hearing on the ground.”

Hastened by the return of ill soldiers crammed into massive troop ships that must have resembled “the plague ships of old,” remarked Cook, the flu spread primarily from east to west, as veterans made their way, by train, from Canada’s Halifax port back to their hometowns.

“The newspapers of the day make note of this. In fact, it’s quite chilling,” Hammond said. “They could track it almost on a daily rate. I think that’s a really chilling parallel to today when have more sophisticated means of tracking, but they could see it and it was the movement along the trains.”

It also proved next to impossible to contain returning troops’ desire to blow off some steam in the euphoric days following the Armistice of 1919 that marked the end of one of the deadliest conflicts in human history.

“From 1918 and 1919, often when we talk about Remembrance Day, we talk about wild celebrations in the streets with cheering and parties,” said Cook. “As we know, by the end of the war and in the immediate post-war years, there were 66,000 Canadians killed in battle, and yet there doesn’t appear to have been any social isolation on Nov. 11th itself—although there was before that in Canada.”

In fact, many of the measures we have seen for COVID-19 were already in place by late 1918, depending on the jurisdiction: schools, businesses and churches were closed, and mask-wearing was encouraged—although, similar to today, those protocols were not without their detractors.

“Without a doubt, the wearing of masks was very episodic. In some cities, there were regulations that people had to wear them in public, but it seemed to be fairly haphazard,” Cook said. “I don’t think there was the same understanding of some of the social medical measures we have today, nor was it as easy to communicate that.”

Public health officials of the time also didn’t have the authority they do today—a far cry from the reverence officials like B.C.’s Dr. Bonnie Henry enjoy in 2020.

But, in the wake of the war and the accompanying health crisis, Canadians knew change was long overdue, and you can draw a straight line from the Spanish flu to today’s handling of COVID-19, thanks to the creation, in 1919, of a federal health department.

“It was acknowledged at the time that the Canadian response to this health crisis had not been uniform and a federal department would be more useful,” Cook explained. “Now it wasn’t the only reason the department was established, but it’s one of those important legacies.”

So, what legacy will emerge from our current COVID crisis? If there is a constant that comes from times of such widespread upheaval, it’s the recognition of the need for landmark, structural change.

“A major event like this leads to fundamental societal changes. What’s interesting about 1919 is that it’s of course wrapped up in the war, and the war seems to have quite clearly had a much more lasting legacy,” reflected Cook.

“If after the Great War we built thousands of memorials around the country, what will we do in 2021 or 2022 when we’re on the other side of this pandemic? Will there be a new round of building memorials? I don’t know. We didn’t do that in 1919 and I think that’s partially allowed us to forget about this traumatic event.”

Marking Remembrance Day in the Sea to Sky

Whistler will be hosting its first-ever virtual Remembrance Day ceremony on Nov. 11.

Although the ceremony is closed to the public, it can be live-streamed for free at whistler.ca/remembranceday.

“Remembrance Day carries deep, deep meaning to our community,” said Mayor Jack Crompton. “I will miss the chance to thank our local veterans for their service and I will miss standing with our whole community to remember the horror of war and the sacrifices made by so many.”

Community members are invited to show their support by placing a poppy in their window and observing two minutes of silence at 11 a.m. wherever they are.

The ceremony will be marked by a flyover courtesy of Blackcomb Helicopters.

Those wishing to have a wreath placed at the Whistler Cenotaph are asked to contact event organizer Steve LeClair at steve.leclair@shaw.ca. Wreaths can be purchased from the Squamish Legion.

The Royal Canadian Legion Pemberton Branch will be live-streaming its own ceremony through its Facebook and other social media channels. Executive members of the legion will also privately lay wreaths at the Pemberton and Mount Currie cemeteries to mark the graves of veterans.

“We are enormously proud of our military family and Remembrance Day is very important, giving us all a chance to reflect, remember and honour those who have lost their lives,” said Pemberton Legion president Lesley Clark in a statement. “While we cannot all be together, we can still remember all those who gave so much and I’d invite you all to watch our Remembrance Service online and take part in the two-minute silence at 11 a.m. If you do choose to visit the memorial at Pemberton Legion, we’d ask that you try and visit at different times of the day in order to help protect the most vulnerable amongst us.”