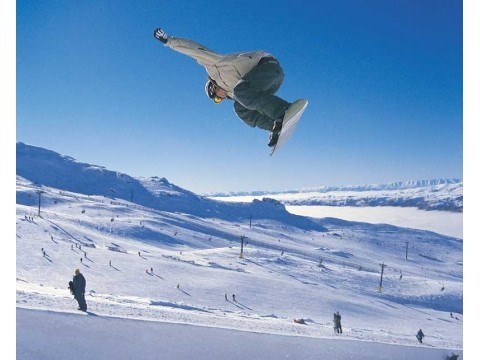 James Riddell, British Olympic skier and winner of the 1929 Kandahar downhill, wrote; "To ski, however well or poorly, is a reminder-whatever one may for a long time have suspected-that one is alive, and that living is tremendous fun. There isn't any other game to compare with it in the world."

And alive is how you will feel when you reach the top of Treble Cone in New Zealand's Central Otago region. Zen-like vistas await from its 2,100 metre summit. The mountains rise straight up from Lake Wanaka and valley floor ,beginning with lush green fields rising through numerous angelic waterfalls and culminating in snow capped peaks that look like the hand of god has turned upside down and dunked, gingerly, in a bowl of icing sugar like snow. When you reach the top of Treble Cone you realise how lucky you are, lucky to find yourself in one of the world's most beautiful places.

Treble Cone (TC as it's known locally) is considered "The Skiers' Mountain" by its boosters because it boasts what is considered New Zealand's best terrain and the most vertical of any New Zealand ski resort. I can testify that the terrain is awesome. It has super big and long natural half-pipes, big mountain chutes and powder.

TC also provides for the novice with a four kilometre run of gentle terrain to its base lodge. It does not have the kind of lift capacity you might expect as a Whistler rider. There are only two lifts, unless you include the Button lift and the Magic Carpet, but one of the lifts is a "Six Pack" - that's right, a six passenger chair which makes for some interesting lift lines. Amazingly, for the normally well-mannered Kiwis, they haven't figured out the alternating lift corral etiquette we seem to have mastered in Whistler. ("After you." "Oh no, after you.") It's more reminiscent of the crazy free-for-all Rugby Game and shoving match you might find at European resorts, except without the Germans in fur headbands shouting some variation of "lipshun warten bitter" - which means something like "wait for me darling" - to their bratty kids that just stomped across your skis.

In New Zealand they call the ski hills "ski fields" because runs and resorts are marked by fences (just like sheep fences) instead of trees. The entire ski area is above the tree line which is beautiful when it's sunny but murder when fog sets in and there's nothing to use for contrast.

Not only is the riding at Treble Cone truly world class, but you'll see some excellent freesking and freeriding going on as well, and you can also witness some of the world's best ski racers as the Austrians and Americans frequently use TC as their summer training facility. This year Canadian alpine, ski cross and snowboard athletes were based at Wanaka for three weeks or more, sharing facilities with the same athletes they'll be competing head-to-head with in Whistler and Cypress at the 2010 Games.

The amenities you find at TC unfortunately are a little less than what we're accustomed to. There is one small day lodge at the base and it will remind you of skiing back in the '80s with boot bags, shoes and back packs all over the floor of the cafeteria. Don't ever complain again about Whistler prices either because you'll be grateful for the $9.99 hamburger, fries and a drink combo - that particular meal at Treble Cone will set you back $18.50.

Treble Cone is located about a 45-minute drive from the township of Wanaka (and 120 kilometres from Wanaka's bigger, glitzier neighbour, Queenstown). It must also be noted that to describe the 45 minute drive as "white knuckle" would be a gross understatement. Your day at Treble Cone will be punctuated by a heart-pounding, sphincter-tightening drive up a winding dirt road with numerous switchbacks and several sections that are not wide enough for two vehicles. Oh, and no guardrails! It's the kind of road that you would not think could exist in a western, industrialized country. If the parking lot wasn't covered in mud, you would probably kiss it! Mercifully, there is a shuttle bus for guests who want to park at the bottom and on this trip two awesome bus drivers named Chris and Al kept your correspondent from being killed.

International travellers will fly in to the previously-mentioned Queenstown, usually from Auckland or Christchurch. The flight from Auckland takes you from the northern tip of New Zealand's North Island to the Southern part of the South Island, and if you have a window seat it will be a flight to remember. The mountains and yes, volcanoes, are breathtaking and descending through mountains that feel close enough to touch makes it feel more like an adventure ride than a airplane flight.

Queenstown is the self proclaimed "Adventure Capital of the World" and it's hard to argue the point as there is a mind-boggling array of activities from the passive to the insane.

Queenstown is somewhat like Whistler - it has just over 10,000 residents but it feels a lot bigger because of all the guests. It is every bit as beautiful with snow capped peaks descending right into Lake Wakatipu, which is one of the most beautiful sights you'll ever see. Its downtown core however is similar in many ways to Banff with one main road and lots of little roads off the main artery. Queenstown has some funky, independent shops and restaurants but is quite commercial with plenty of internationally-branded stores and restaurants.

Wanaka, however, is a really special place. It's small without being hick, cool without being trendy, non-commercial without being smugly hippy... if Goldilocks was a skier, she could settle down in Wanaka. The population is about half of Whistler's and it has a small downtown core that is not exactly a pedestrian mall but not too busy with traffic either. The first thing you notice is that (with the exception of a Subway) there are no branded chain restaurants or retail stores. It's all mom and pop operators, which is refreshing, but just to keep reality in check it adds no incremental value to the level of service you'll receive.

The town rests on the shores of Lake Wanaka, and provides for an unbelievable alpine panorama. The massive open lake frontage is what draws most of Wanaka's guests; part of its winter charm is that it is the off season - most of Wanaka's business is done over the summer months.

Wanaka was originally built around a burgeoning gold rush in the 1870s which instigated development in the area. To this day, farming is still part of the fabric of the community, but tourism is the new gold and success in this business requires the beauty of the natural environment to stay picture perfect.

Wanaka has another similarity to Whistler as well as the view. To keep the environment in pristine condition, Lake Wanaka Tourism launched Sustainable Wanaka in 2004. To date, the sustainable Tourism project has had sixty-four tourism businesses go through a program to make their businesses more sustainable. That includes businesses in accommodation, retail and transportation as well as activity operators. Businesses develop their own sustainable visions and then each business is audited and provided an assessment with an action plan for execution.

As for what you can do in Wanaka, well there is plenty; from family fun (like Puzzling World - a giant building filled with optical illusions and mazes) to adrenaline overload (flights in a real jet fighter at supersonic speed). Eating and drinking is also a pleasure in Wanaka. It's not super-sophisticated but when you've finished a day's skiing all you really want is a hearty meal served by a friendly face and you can find that at Relishes Café, which overlooks the lake and mountains. It has fresh seafood, venison, chicken, steak, vegetarian dishes and tempting desserts. The atmosphere is warm and cozy with a roaring fire. Wear short sleeves 'cause if you don't you'll sweat like you went 10 rounds with Mike Tyson.

Sargoods Restaurant is in the beautiful Edgewater resort which is right on the lake, and the evening views are awesome. The wine list includes New Zealand's best (Central Otago actually produces some of the best Pinot Noir in the world). It offers the typical white tablecloth meal as well as a bar menu available in a very laid back but upscale lounge. You can eat on the really comfortable couches, chat and watch TV. You know your mom would hate it and that's what makes it so fun.

If partying is what you're after, Barluga/Woody's will do the trick. Two bars sit side by side and offer two different kinds of atmospheres: Barluga is the swankier upscale wine bar (read 30-to-40-somethings) while Woody's offers a chill environment with pool for the 20-somethings. The real beauty of the place is that just out front of the two entry doors is an outdoor patio with two giant fireplaces where everyone mixes and mingles like you would around the fire at a cottage party... priceless.

Shooters is where you go if you want to dance, drink and take in the eye candy... It's a nightclub. So 'nuff said...

After the bar you'll want to hit The Doughbin which offers traditional New Zealand bakery fare, which means meat pies. No trip to New Zealand is complete without sampling several dozen of this traditional Kiwi treat. Next morning or afternoon The Snack Shack is where you'll want to grab a hangover curing Gyros or Turkish Kebab.

Wanaka's greatest treasures however are revealed to those who earn them. Right from downtown you can take a 45 minute hike and be on top of Mount Iron, and enjoy looking down on Wanaka like a king. This super easy to find and well worn, and the steep path provides 360 degree views of the surrounding mountains and the lake and town below. Even more spectacular is the Rob Roy Glacier Track that leads into Mount Aspiring National Park, an amazing world of mountains, glaciers, river valleys and alpine lakes.

The experience begins with a one-hour drive along dirt roads through the Matukituki Valley into the national park. At the end of the road your three hour hike starts at a singletrack path that leads through a sheep paddock to a 100 meter suspension bridge over raging Rob Roy Stream. Once across you'll feel like you're in the land of Gandalf - the kind of scenery featured in the Lord of the Rings trilogy. The trek that follows is lined with waterfalls, beech forest and the luxuriant understory of ferns and mosses. Once at the treeline the views yield to spectacular views of active hanging glaciers beneath Mount Rob Roy.

The only worries you'll have while gazing at the majestic heights you've scaled are the The Kea birds - a species of parrot found in forested and alpine regions of the South; they are legendary for their intelligence and they will eat your lunch.

If adventure, skiing and relaxing in beautiful mountain resorts with really cool people is your thing, then get your to do list and add Wanaka to it... put it right at the top.

Ralph Forsyth is a ski guide and instructor, which is what brought him to Wanaka this year. He's also a Whistler Councillor.