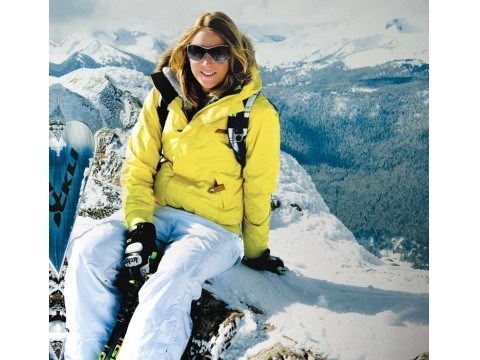 When Ashleigh McIvor was a little skier in Whistler she was never much interested in going to ski school with the rest of the kids.

"Because they made us ski in a line and all the kids were slow and we just wanted to bomb it," said younger sister Lindsay, speaking of her sister from her home in Revelstoke.

So instead the girls, who are less than two years apart, would explore the mountains with their parents whenever they could take them, on the weekends and the occasional weekday.

And they fell in love with skiing - and more importantly, going fast on skis.

It comes as no surprise then, to Ashleigh's family and friends, that she is on the eve of competing for Canada in the Olympic Games in ski cross. The sport will make its Olympic debut next week.

Ashleigh was the first athlete to make the Olympic team after becoming World Ski Cross Champion in 2009 and she hasn't stopped there. This World Cup season has brought her first and second place finishes.

She has become the face of the new sport in Canada. And, in some ways, there couldn't be a better spokesperson - pretty, fun-loving, laid-back and at the top of her game.

"She has an insane internal passion and fire for going fast at extreme sports," said Lindsay.

That passion is transferred from her skis to her mountain bike, her dirt bike and her surfboard.

She also loves the thrill of competition.

So, when her dad Brent doubted whether or not she should compete in the X-Games in Aspen at the end of January, just weeks before the Olympics, Ashleigh thanked him for his input and headed south of the border.

"I, as a parent, questioned the wisdom of her going in the X-Games, which was not something she needed to do for getting into the Olympics," said Brent.

"She said to me, 'Dad, I've run the course six times. It's fantastic. I can't wait to get back to the top when I get to the bottom and I need it to keep on top of my game.'"

Her response is a testament to her love and commitment to the sport.

That love of the sport is obvious, said team physiotherapist Chris Napier, just by watching Ashleigh at the end of a run.

"Ashleigh is all about making things fun," said Napier, who has worked closely on the athlete, dealing with her shoulder and other injuries.

"She loves the sport and when she has fun on a course, she usually excels."

Starting with those carefree days skiing the mountains with her mom, dad and sister, to alpine racing as a young teen, the thrill of competition is in her blood.

In fact, said Lindsay, her sister was never one for sitting back and letting life pass her by.

"She was always actively living her life," she said.

If she wasn't outside bombing around, she was writing or painting.

"She was always looking to express herself in some way," Lindsay added.

She thinks that when Ashleigh was writing she was imagining how she was going to live the best life possible.

And although this may seem like an unimaginable dream, in many ways this was always written in the stars.

She was just that good when she was younger.

She broke her leg badly in the Canadian Championships in 2002. It was her last alpine event. It took her a long time to recover and there was a chance that she may have hung up her race skis for good.

And then she discovered ski cross, where a group of four racers battle it out to the bottom of the course over rollers and jumps and turns. The top two move on to the next round.

"As she described it, 'like racing your buddies down the hill when you were a kid, rather than against the clock,'" said Brent.

It's a young sport and a fun sport.

"It was a way more relaxed atmosphere," said Lindsay. "She had a lot more fun with skier cross."

In November 2006 the International Olympic Committee decided to include ski cross in the 2010 Games program.

Now the Whistler girl could compete in a sport she loved in her own backyard.

She loves the course at Cypress, built by Whistler-based Jeff Ihaksi, who built the 2006 snowboarding courses for the Torino Olympics. Ashleigh placed second on the Cypress course at a World Cup last season.

So with the skill, the mental toughness, the experience and the love of the sport on her side, Ashleigh is poised for the race of her life on Feb. 23. Whistler will be watching and hoping for the best for this girl who grew up on the local mountains, only to compete with the best in the world just one hour from home.