Trip-planning and digital resource expands in second year
Aug 11, 2019 12:30 AM By: Brandon Barrett 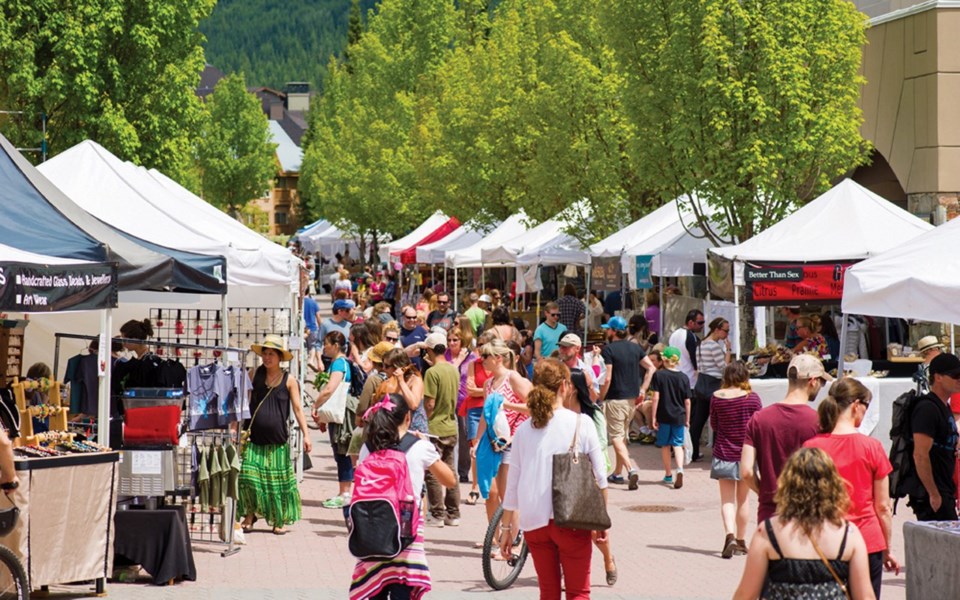 EPIC TRAIL The BC Farmers' Market Trail helps users learn more about the 145 featured markets across the province, with info on what's in season, participating vendors, and trip-planning resources. Photo by Mike Crane / Courtesy of Tourism Whistler

At a recent agricultural tradeshow on Vancouver Island, BC Association of Farmers' Markets (BCAFM) director Heather O'Hara was given a sage piece of travel advice.

"There was a gentleman who came up to my booth and said, 'The first things my wife and I look for when we get on the road is a town's cemetery and the farmers' market," she said with a laugh. "You can learn the history at the cemetery and you can learn about the food and the community spirit at the market."

The BCAFM is helping both visitors and locals connect with farmers' markets around the province through a digital resource and trip-planning tool called The BC Farmers' Market Trail, modelled after the BC Ale Trail, a similar initiative centred around craft beer.

Designed to meet the growing demand for information on sourcing all things local, the mobile-friendly website offers snapshots of each of the 145 BCAFM member markets, giving details on each market's specialties and what products are in season, along with basic information about operating hours.

"Right now, Phase 1 of this entire project is to get the markets listed, with more detail about the region and to give people a bit of a flavour of the markets in that region," O'Hara explained. "But in the future, I'd love to be in a situation where we're actually featuring our 4,000 vendors as well."

Last year, the initiative launched with a focus on markets in the Kootenay Rockies and Columbia Basin regions, while this year the trail expands its focus to the Cariboo Chilcotin Coast, Northern B.C., the Sunshine Coast and Vancouver Island. O'Hara said the trail will shift focus to the remaining regions in B.C., including the Sea to Sky, which features four listed farmers' markets: Whistler, Pemberton and two in Squamish.

"Just last Sunday, I had a few people from Tampa Bay who run a series of markets there who had used the trail to find us," she noted. "I wasn't expecting it to have such a quick return on the project. I thought it would be one of those projects that built up over time, but I already found someone who was using it directly for ... its intended purpose." With Destination BC contributing $50,000 to the project this year, part of the goal of the trail is to encourage and support travel based around B.C.'s farmers' markets.

"We have a lot of tourists who are interested in nature and local and they care about the ethics of purchasing, so I think when people come and visit certain locations, visiting a farmers' market is an excellent way to see what's going on in that particular area," Clamp said. "Instead of just getting the same products you could find in malls across Canada, you're getting products that are specific to the place that you're visiting."

According to the BCAFM, 80 per cent of British Columbians' food purchasing decisions are "strongly influenced" by their interest in supporting the local economy, while 79 per cent said their buying choices are influenced by a desire for fresh food.

"The BC Farmers' Market Trail is a great example of marketing collaboration and alignment across the province, connecting travelers with ways to eat and shop locally for farm fresh foods," said Marsha Walden, CEO of Destination BC, in a release. "This trail unites the collective power of tourism champions in towns, cities, and regions with a common purpose—the result being a great trip-planning tool for visitors and residents that enables them to enjoy healthy food choices on the way to their destination."