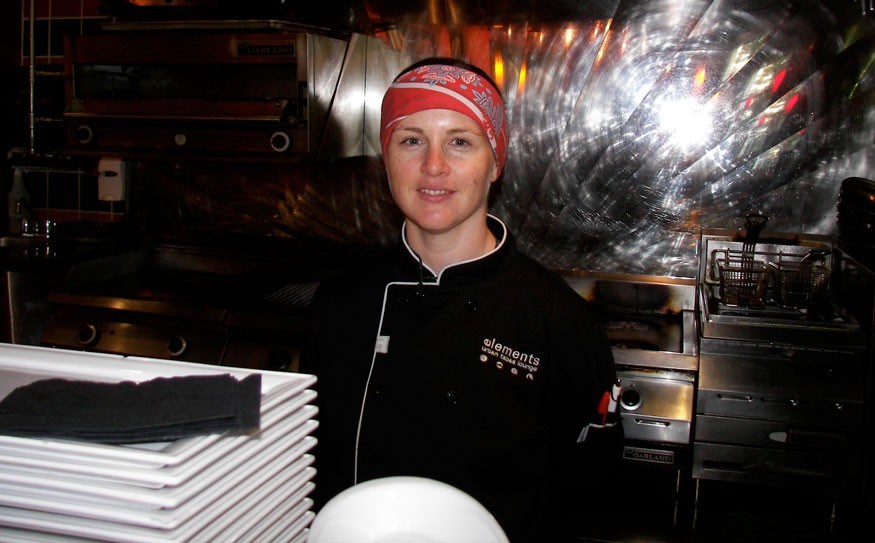 FRESH CHEF Erin Stone has just taken over the role of Executive Chef at Elements and the Wildwood Bistro and Bar.

One owner, two restaurants, one executive chef and just one month in.

The new executive chef at Elements and The Wildwood in Whistler, Erin Stone, has her work cut out for her running two kitchens in very different settings in her new position. The late summer kitchen staff at The Wildwood averages about a dozen people while the average number at Elements is about 10.

On a busy Saturday she took a few minutes out of her day to chat about her six years at Elements in the Summit Lodge and her recent appointment as Executive Chef. Wearing one of her signature oversized headbands, she says she still enjoys cooking at home, sometimes using her home creations as starting points for restaurant menu items.

Elements is currently debuting a dish crafted at home and is one of her favourites at the moment: roasted duck breast with a cauliflower salad featuring chanterelles and chestnuts.

"I've just got a new one that I've come up with in the last couple of days just thinking about what's new and fresh around," she says in the quiet time at Elements after lunch but before Saturday dinner service.

Fall is here so it means fungus is making its return so, of course, says Stone the dish is built around chanterelle mushrooms.

The dish is one inspired by a series of conversations that led to duck breast, cauliflower, chanterelles and chestnuts coming together on a plate with an apple cider vinaigrette.

"The chanterelles definitely are my favourite mushroom and that was the base of it all," she says. "The vinaigrette is already being used in an existing menu item."

The orange-yellowish, meaty and funnel-shaped chanterelle mushrooms are packed with vitamin C and they have been identified as one of the richest sources of vitamin D. We've been eating this popular fungus since about the 1500s and the French turned chanterelles into a culinary superstar in the 1700s when palace cooks started using the mushrooms regularly.

The duck that goes with the chanterelles comes from Two Rivers Specialty Meats in Pemberton — in fact all the meat served at Elements and Wildwood comes from Two Rivers, while Good Times Farms in the Upper Squamish Valley delivers fresh produce twice a week to Stone and her teams at the two kitchens she manages.

Elements is a tapas restaurant with a menu that puts an emphasis on shared dishes and excellent wine. The Wildwood is quite different, Stone says, with more focus on dishes for individuals and the meals are prepared with emphasis on value. She notes that both outlets are popular with Whistler residents and visitors alike.

According to Stone, Wildwood cooks up as many as 16 cases of potatoes a week. Of course, the potatoes come from Pemberton in cases of 50 lbs (18 kg) each.

Stone grew up on a farm in her hometown of Wanganui in New Zealand. From an early age she gained an appreciation for the chickens and lambs raised around her. Her parents also produced vegetables and herbs on the farm. After Stone graduated from cooking school she spent a few years travelling and working in kitchens around the world from New Zealand to the United Kingdom. She has had stops in England, Scotland and here in Canada. Her world travels have introduced her to flavours from around the world, helpful in the tapas atmosphere at Elements.

The newly appointed executive chef somewhat reluctantly agrees to be photographed — it is clear she'd rather be preparing chanterelles, cutting cauliflower, slicing chestnuts or scoring duck breast for the expected Saturday night tapas crowd at Elements. Stone cracks a hint of smile though and once the photo shoot is over she and her red headband get back to the real work of preparing food sourced locally for the Elements guests.

Reduce apple cider vinegar by half, cool. Place in a bowl with Dijon and

lime juice, whisk. Continue to whisk and slowly pour in the oils. Add a

pinch of salt and cracked black pepper. Set aside. This can be kept in the

fridge for a couple of weeks.

Score the skin on the duck breast and trim any excess fat, season with salt and pepper. Place in a pan skin side down on a medium-low heat. Cook for five to six-minutes, skin should be golden brown and crispy, then turn over and cook for a further two minutes. Remove from pan and leave to rest somewhere warm, skin-side up, so it remains crispy. In the same pan (you may want to discard some of the fat) place the cauliflower and chanterelles. Sauté until cauliflower is just tender then add the sliced chestnuts. Season with salt and pepper. In a bowl place the mixed greens and the apple cider vinaigrette. Add the warm cauliflower mix and toss gently. Divide between two bowls. Slice the duck and gently place on the top of the salad. Enjoy.