After so many years at the helm of one of Whistler's most cherished restaurants, Sushi Village founder Mikito Homma has become something of a local celebrity. "Many, many people tell me that you are icon of Whistler, you're so famous.
Nov 25, 2015 5:00 PM By: Brandon Barrett 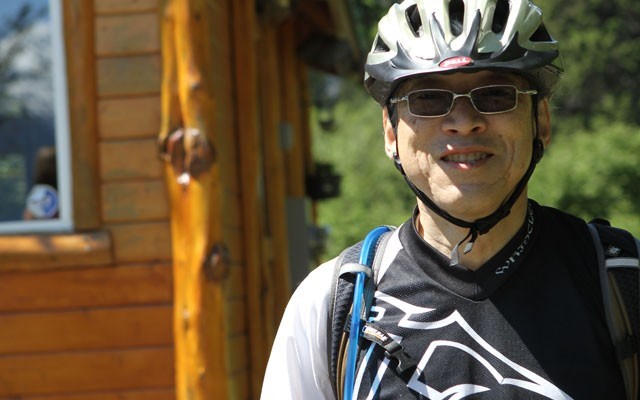 ON A ROLL Sushi Village founder Miki Homma could never have imagined what his beloved Japanese restaurant would blossom into when he opened it 30 years ago as a way to fund his ski-bum lifestyle. Photo submitted

After so many years at the helm of one of Whistler's most cherished restaurants, Sushi Village founder Mikito Homma has become something of a local celebrity.

"Many, many people tell me that you are icon of Whistler, you're so famous. Blah, blah, blah. Honestly, I don't feel like it," said Homma in his characteristic Japanese accent.

But as reluctant as he is to accept his iconic status, there's no downplaying the role Homma has played in transforming one of the resort's first restaurants into a beloved haunt.

And with Sushi Village officially turning 30 next month — a fact which Homma had to be reminded of by one of his long-time customers last week — there's no better time to reflect back on three decades of memorable nights, and many, many more that will probably be lost forever to the fog of memory (a.k.a. sake margaritas). Sushi Village opened in December 1985, only the sixth restaurant in Whistler, and assuredly the first that served Japanese cuisine. Homma and two of his Japanese friends had become so enamoured with the upstart ski resort that they decided to make it their homebase, and opened a sushi shop to fund their ski-bum lifestyle.

By all accounts, it was a fairly risky venture to open a restaurant in a struggling ski town that had been saved from the brink of bankruptcy only two years before.

"When we left Vancouver, every friend told me, 'Ah, you're going to lose your money and come back and work for us again.' Sure enough the first year was really tough and we could've been bankrupted. But somehow we managed to survive," said Homma.

What seemed even more insane at the time was opening a Japanese eatery long before the West Coast developed its fervent sushi obsession.

"Back then probably 30, 40 per cent of people did not know how to use chopsticks," said Homma.

You get the sense that Homma wouldn't have been too bent out of shape if Sushi Village had shuttered its doors way back when. After all, the restaurant was never intended to be a cash cow.

"We went to Whistler because as long as I run the restaurant, I can eat and then I can go ski. That's the biggest reason I came; I never came to make money or become a big icon restaurant," he said. "I never thought about it, it just ended up like that. I'm lucky, I guess."

Of course, luck is just one part of the equation. Sushi Village is revered for its fun, friendly atmosphere, and while Homma believes his menu's gargantuan-sized "Dumbo" sake may have something to do with that, it's his staff that can be credited for creating the convivial ambience.

"Our staff like to entertain customers, plus they want to enjoy (their job) too," he said.

Miki, as he's affectionately known, may not be one for the limelight himself, but he certainly takes a great deal of pleasure in reflecting back on some of his restaurant's celebrity clientele. There was the time someone in Bill Gates' entourage called to make a reservation. Everyone thought it was a prank until the demure multibillionaire and his wife showed up with their bodyguard in tow.

"They were very quiet, not snobby. Very polite," Homma recalled.

Another time Academy Award-winner Hilary Swank strolled in during the dinner rush and had to wait to be seated. Turns out even an Oscar or two doesn't guarantee you a table at Sushi Village.

"We made her wait a long time, but when we are busy, we are busy," Homma said with a laugh.

You can draw certain parallels between Sushi Village and the community it's served for so many years. Both came of age in the same era. Both fought seemingly insurmountable odds to succeed, defying all expectations without ever expecting to. And, despite their now world-class reputations, both have stayed true to their humble roots.

In fact, Homma still remembers the sage advice passed onto him by mountain photographer Greg Griffith while riding the chairlift back in 1985. "He told me: 'Miki, if you come here to make money, you won't make it. But if you came here to enjoy life, you'll do just fine.'"

In a food processor mix:

Add this mixture to:

2lbs of boneless, skinless chicken thighs that have been chopped into bite sized pieces.

Marinate chicken overnight in the refrigerator.

Remove chicken and allow to come to room temperature for 1 hour.

Dip chicken pieces in beaten egg and rolls in cornstarch and pepper mixture.

Carefully drop chicken into hot oil in small batches, being careful not to over-crowd the pan. Remove once internal temperature has reached 165 degrees (about 5-6 minutes).

Remove each batch and allow to drain on a baking rack, placed over a sheet pan.

Continue frying until all chicken is golden and tasty.

Serve with fresh lemon and orange wedges, to be squeezed on to chicken just before you are ready to enjoy, and add a side dish of Tonkatsu sauce (Bulldog brand preferably), for dipping.