The face of Mount Currie has a surrealism about it that makes it look like a drawing by M.C. Escher; it's a wall of sharp triangle after sharp triangle impossibly patterned in bas-relief.
May 15, 2013 9:00 PM By: Cathryn Atkinson 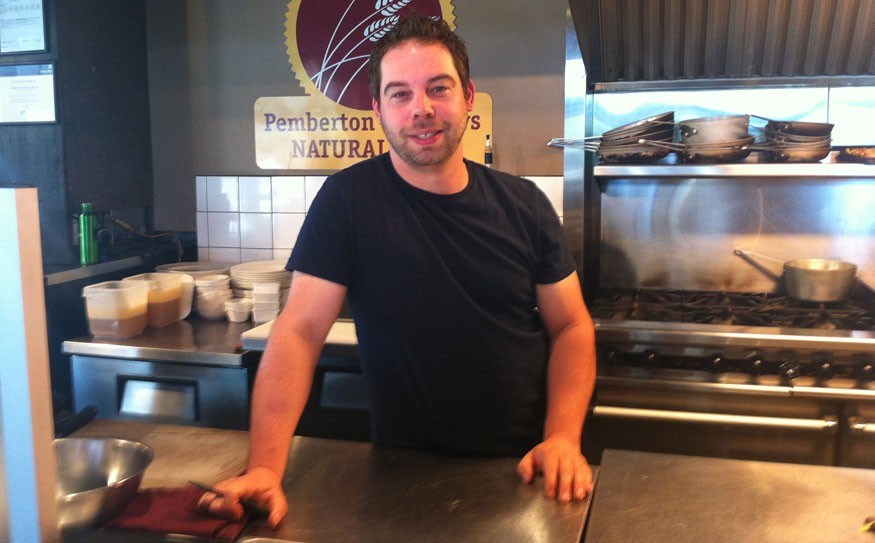 The face of Mount Currie has a surrealism about it that makes it look like a drawing by M.C. Escher; it's a wall of sharp triangle after sharp triangle impossibly patterned in bas-relief. The geometry of the mountain is further sharpened by the stubborn snow that doesn't seem to want to melt away, despite the heat in the valley.

Mount Currie is the vision that greets the diners at the Mile One Eatery from the deck and out of every plate glass window in the restaurant.

Mile One's co-owner and chef Randy Jones knows he is lucky to be able to offer diners a front row seat.

"The view's spectacular and people do comment on it and enjoy having it," he said.

About the food, Jones has far more say.

"We're trying to put out a good quality, approachable product. It's everyday food but great quality ingredients is the most important thing we do. It's the foundation of our food. It's not pretentious food, it's comfort food and we take that seriously," he said.

There are six types of mac 'n cheese, including one with elk chorizo, another with Frazer Valley free-run chicken, there are steak sandwiches, Pemberton Meadows Natural Beef hot dogs (offered three ways), their special "Outlandish" oyster burger, albacore tuna bought from one fisherman based on Vancouver Island.

And then there are the hamburgers, oh yes.

"The burger is definitely the foundation of our menu. We didn't necessarily set out to open a burger joint originally but a burger is such a big part of everyday life," Jones said.

There are seven types of burgers, varying by B.C.-made cheeses, local bacon and the same local beef, veggies and other delicious add-ons. The organic produce almost at their fingertips in Pemberton proved a no-brainer.

"We've got a great bakery across the street (Blackbird Bakery) that makes our buns for us. We've got the Pemberton Meadows natural beef here in the valley... and then as we go farther up the Meadows Road, the potatoes we get from Kuurne's (Farm)... you start pulling together your burger fries concept," Jones said. "We take it one step further. My food thing is really about British Columbia... B.C. is an incredible melting pot of flavours."

The price point is something Jones keeps an eye on, being able to offer a daily $10 special but using the higher quality product.

"We've taken our passion for the industry, which comes from the fine dining world, and put it in a small community and balanced what we think will meet people's needs. Our margins on things are something we pay attention to."

Mile One Eatery, which has just passed its second birthday, recently reopened following a short spring break for staff and a chance to prepare for the summer season.

"We have a small team that goes pretty hard when we're open so we wanted to give them that time," Jones said. "We did a few adjustments to the menu; we came off a significant renovation last November with big menu changes, and this time around we did menu tweaks. Our volume tends to increase in the summer so we want to make sure that the balance is right."

Jones trained at the Dubrulle International Culinary & Hotel Institute in Vancouver (now the Art Institute of Vancouver) and received a fine dining culinary training which he took to positions at three Fairmont hotels in western Canada. He also spent 10 years in food and beverage management at Whistler Blackcomb.

Pemberton became home in 2000, and Jones said he and his wife and co-owner Cindy Yu "saw an opportunity to come up between the McDonald's side of things to more full service. We felt we could create something that fit right in the middle. It has been a good decision; it was well received."

Locals make up an important segment of the clientele, as do "people passing through" from Whistler or coming from the other direction, via the Duffey Lake Road, on their way to the coast.

"What's really interesting are the seasonal visitors. We'll have people who are backcountry ski touring on the Duffey or the Hurley. We'll get the snowmobilers in the appropriate season. Right now they are fading away and the mountain bikers are really growing, visitors from the golf courses."

Dredge oysters in flour, then egg, and finally panko crumbs until evenly coated.

Gently place breaded oysters in heated oil and shallow fry/pan fry until golden on both sides and cooked through.

Remove from oil onto paper lined plate, season with salt & pepper to taste.

Enjoy by themselves with a great dip or on a fresh salad or as a backyard burger!