France flew into the Pemberton Valley five years ago in the form of Blackbird Bakery.
Oct 2, 2013 9:00 PM By: Cathryn Atkinson 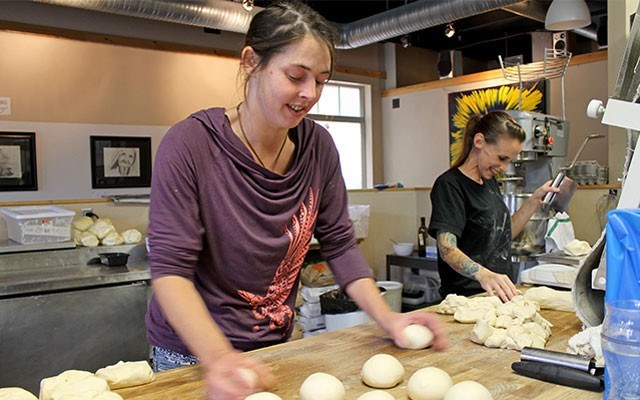 France flew into the Pemberton Valley five years ago in the form of Blackbird Bakery.

If you've ever been to a French patisserie, you will know that between the croissants and ganache, the chocolate and the sugars, there is a lot of training and care on the part of the master baker.

And so it is with the bakery's owner, Raven Burns.

Every loaf of bread or latte she sells in Pemberton has its provenance in her fine dining background in Vancouver and thousands of hours of kneading. Burns trained at CinCin Restaurant under renowned chocolatier-pâtissier Thierry Busset. From there, she went to Bluewater, afterwards becoming the pastry chef at C Restaurant.

But when Burns was given the opportunity to leave the Vancouver restaurant scene for the village, she took it.

She started Blackbird Bakery with her opening partner Richard Stuart, but now runs it herself. She says she's got it "pretty dialed now."

"We are going into our fifth year," she said, laughing with incredulity. "It's gone day-by-day... Oh wow! I had this idea to open a bakery, why not!, and the next thing you know, I'm opening a bakery. Then the next thing is what are you going to make?"

Not that a classically trained pastry chef is short of options, but Burns's original idea was to establish a bakery for solely producing fresh bread. All the bread Blackbird now bakes begins with a sourdough starter, she said.

"I love it so much. I wanted to get back to the basics of food and being methodical... We start with the bread since I was classically trained in French cooking; Chef Thierry is very French," she said.

"We've gone through a lot of transitions but we've stayed pretty solid about the fact that the food is the most important thing."

They always use organic sugar and only organic Avalon Milk gets mixed in the batters and doughs. The organic butter comes from New Zealand.

Burns uses the term "organic" in a different way when she describes how they grew their product line and the café part of her operation.

"First we made a few cookies and the next thing we knew, we were selling 100 a day. And then bread. It just happened. I thought 'we've mastered bread, so I can get off of this.' We get all the breads out by 8 a.m. and we've got danishes and the pains au raisins or pains au chocolat and we thought we had a little more time," she said.

"I thought, 'we'll make brownies today.' And I make the brownies and put them out and they sold, and we sold 40 brownies in two days in a small town."

So that segues perfectly into a conversation about Pemberton's sweet tooth.

"They do have one, they really, really do. We've been doing our brownies gluten-free and our banana bread gluten-free and a coconut rocher macaroon (this week's recipe) and they start selling. We introduced new sandwiches and people liked it. It makes me happy that people seem to really respond to it," Burns said.

Blackbird has an open baker's kitchen with a busy staff that you can see at work, with an L-shape coffee shop wrapped around it and local art on the walls. They serve Pemberton Valley Coffee.

"We weren't going to do a coffee shop at all, then people would have a danish and have to go somewhere else to get their cappuccino and I thought that you can't go into a pastry shop anywhere in the world and not get a cup of coffee. I invested in the espresso machine and it's really been a great thing. We gained a lot of local following. The tradesmen could come in for their sandwich and a coffee. It's been a great addition.

Across the street, Portage Road, is Mile One Eating House, another lover of the organic approach. Blackbird Bakery bakes up to 1,500 burger buns a week for them.

And for the fall Blackbird is expecting a delivery of sugar pumpkins from a farmer from Birken. "We'll roast them and have the best pumpkin pie."

Burns has a lot of time for the Pemberton restaurateurs, growers and others who keep good food front and centre.  "I love this movement of cooking your food and not pulling it out of a box. All of us here, we're all trying to do something hearty."

Bring that to a boil, turn off heat and add coconut, and stir. Add the eggs one at a time, then finally add flour. Let it sit overnight, or till fully chilled.

Bake at 375 degrees until golden brown.