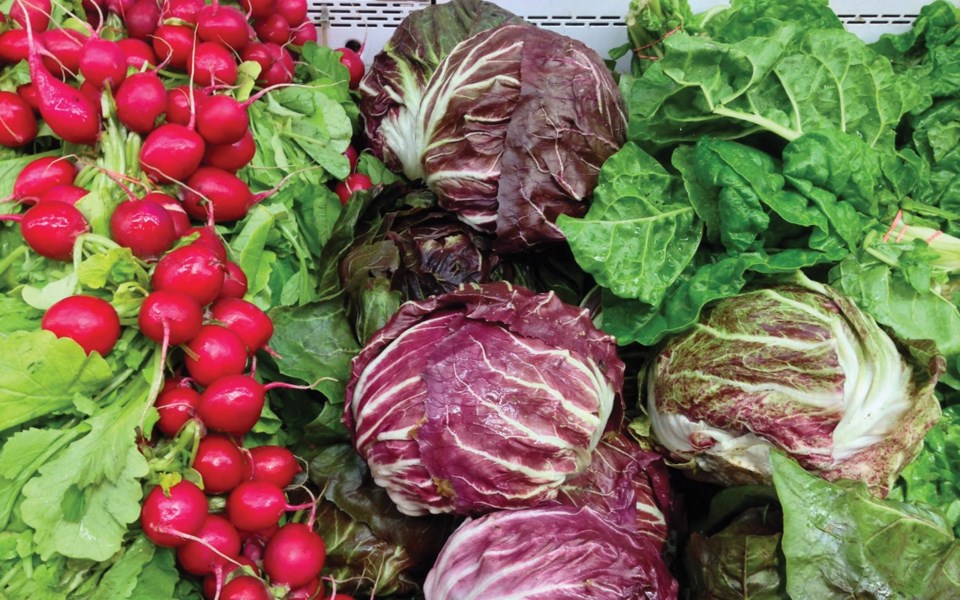 A LITTLE HELP FROM YOUR FRIENDS Fresh fruits and veggies, especially raw, like this gorgeous array at Mary's Garden in the agricultural land reserve in Surrey, are rocket fuel for your brain. PHOTO by Glenda Bartosh

Sure, sure, we're all busy with all that back-to-school, back-to work stuff this time of year.

But wait a sec!

Before you shove that muffin or little honey cruller in your mouth because you didn't have time to make yourself a decent lunch before you left home—and now have even less time to grab a nice big salad or tasty bowl of pho, which is making you feel even more stressed out and less able to concentrate—know that that dear old guru of healthy eating, Adelle Davis, had things right in at least one regard. You are, indeed, what you eat.

Ms. Davis, who, ironically, died from cancer some 45 years ago, was a confident, outspoken nutritionist from Indiana not without her critics and controversies. She was as famous for her information as her misinformation (sound familiar?), including the out-there notions that magnesium could treat epilepsy and mega-doses of vitamins were good for you (they can actually harm you).

Still, she remained popular and influential for decades after the Second World War, spreading the word about the importance of good nutrition to North Americans, especially housewives eager to learn about same and hear from a new (read: non-male) authority figure.

Adelle thought of herself as a newspaper reporter, gathering information about healthy eating and disseminating it to others. The public responded in spades. At some point, Associated Press compared her to Ralph Nader, whose classic, Unsafe at Any Speed, was kicking around about the same time.

Publishing a string of best sellers whose titles all started with the exhortation, "Let's..." (as in, Let's Get Well, Let's Eat Right to Keep Fit, and more), Ms. Davis' popularity hit high tide about the same time Francis Moore Lappe's Diet for a Small Planet drifted into the food conversation. (See more about Diet in my "Less meat = less heat" column, Pique, Aug. 15, 2019.) Full disclosure: I had titles from all three authors on my bookshelf at some time in my increasingly misty, distant, California-dreamin' past.

It was never true, as Ms. Davis repeatedly advocated during her career but never came to rue—even a teeny bit—that simply eating the right foods would prevent cancer. She insisted, even at the end, that her multiple myeloma was due to eating junk food in college, and x-rays. Many of us sniggered, not necessarily meanly, at the irony of it all.

But she was right in other ways. Her assertion that the food industry floods us with bad-eating "propaganda" is still pretty right-on, as we old hippies used to say. Evidence still supports her disavowal of sugar and her famous quote, "Eat breakfast like a king, lunch like a prince (or princess) and dinner like a pauper."

Now her popular axiom, you are what you eat, is proving true in more ways than one, especially when it comes to our beautiful brains.

From mood and well-being to mental health and the ability to concentrate or handle stress, scientists are proving how connected our guts are to our brains. And it's all due to microbes: Different microbes, good and bad, that we ingest intentionally and otherwise (some might transfer with something as innocent as an intimate kiss) as well as what goes on with our own personal gut microbiomes, including what we feed them.

According to New Scientist, the World Health Organization ranks depression as the No. 1 cause of disability, affecting at least 300 million people around the world. Severe depression affects 15 per cent of women after pregnancy. But even depression is on the list of ailments that the right microbes can help us overcome. Ms. Davis would love it.

Studies show that microbes in our guts produce neurotransmitters that impact our brains several ways: via the vagus nerve that connects them with our stomachs; by influencing immune cells in our guts that produce chemicals that can affect the brain; and by producing other chemicals that get into our bloodstream and can also impact the brain (yes, they pass through the blood/brain barrier).

Early evidence shows that some microbes like the bacterium Lactobacillus rhamnosus, which is found in some yogurts, (one more reason to read your labels), have a strong anti-anxiety effect on mice. Other bacteria, think of them as bad microbes, result in symptoms in mice like typical human depression. You know the feeling—anxiety, difficulty concentrating, and a desire just to curl up in a ball and sleep.

Good microbes in your gut thrive on fibre from a wide range of plant-based foods, so a diet loaded with whole grains, pulses like lentils and chickpeas, and lovely leafy greens is perfect for our guts—and brains. Greens like kale, chard and spinach are especially good as they're also loaded with iron, which we all need more of as we eat more plant-based foods.

Scientists also point out you don't need non-food probiotic supplements for a healthy gut—in fact, those can be as bad for you as Adelle Davis' mega-doses of vitamins. But your gut (and brain) will love all those pickles and fermented or cultured foods like kimchi I talked about last time ("Pickled pink," Pique, Aug. 31). Plus probiotic foods like yummy yogurt and kefir, even good cheese.

As for those fruits and veggies with a nice red colour—radishes, tomatoes, red beets, radicchio, pink grapefruit and, especially, watermelon—they deliver the fibre healthy gut micro-organisms love, as well as lycopene, a nonvitamin A carotenoid that gives them their distinctive colour (and powers solar cells: "Here comes the sun," Pique, June 6, 2019). Lycopene also shows promising good-health impacts, including anti-cancer ones.

Dearly departed Adelle might have the last laugh after all.

Glenda Bartosh is an award-winning journalist who's excited to see that Ralph Nader is alive and well, and still pumping out books like To the Ramparts. See you there with a crossbow.