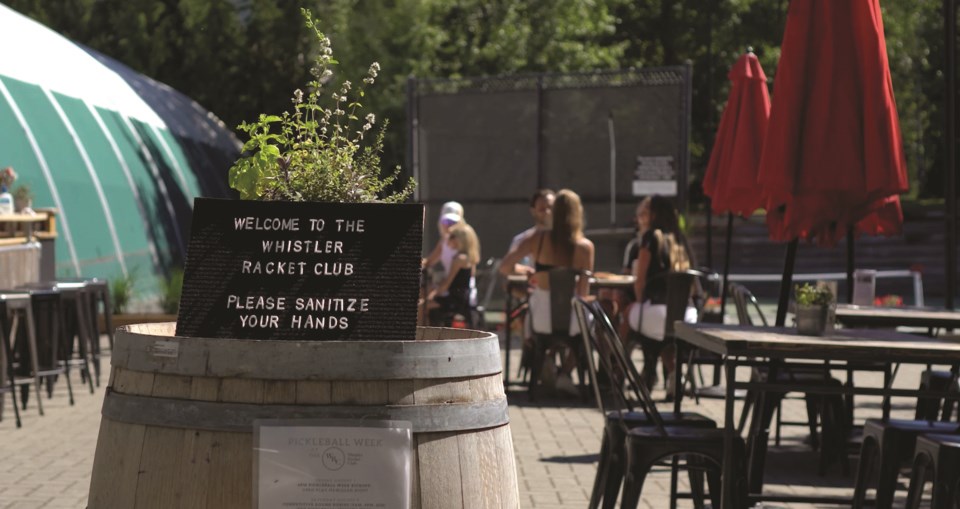 The Whistler Farmers’ Market leaves its usual Upper Village home this summer for the Whistler Racket Club, which will host 50 vendors every Sunday from May 23 to Oct. 10. Screenshot / mywrc.ca

The Whistler Farmers’ Market (WFM) is officially on the move for 2021.

The market gets underway May 23 from its new home in the carpark of the Whistler Racket Club, and will feature 50 vendors each week, including a variety of food and beverage offerings, local farms, and a selection of artisan craft-makers.

Nearly 100 vendors will be rotating throughout the season, which runs from 11 a.m. to 4 p.m. every Sunday until Oct. 10. The regular Wednesday evening markets of past years are currently on pause.

“It’s been a lot of work for the market and the vendors to adapt to COVID, and we’re just looking to build on the wins of last season, hosting a larger market, with more variety and shopping options, and a chance for the community to really enjoy that,” said market manager Bree Eagles.

This year marks the first time the market will be held outside of its usual home in the Upper Village. With COVID-19 upending plans in 2020, the board of directors voted against holding the market at its long-time venue at Blackcomb base, land leased by Whistler Blackcomb, as physical distancing protocols would have only permitted 17 vendors, a number the board felt wasn’t financially viable. The board had also applied to the Resort Municipality of Whistler (RMOW) to host the market in the day lots behind the Audain Art Museum, but was rejected, with the RMOW citing concerns, among others, around traffic flow and construction work in the area. Then, at the 11th hour, the board secured a home in front of the Squamish Lil’wat Cultural Centre (SLCC), which presented some logistical challenges to work through.

“The SLCC really was awesome and was a super fun market that worked really well for us. The glitch with the SLCC as well as the Blackcomb base last year was that there just wasn’t enough room for enough vendors and a bunch of people count on that for their summer income,” said longtime vendor Andrew Budgell of Laughing Crow Organics, who credited new management for running a smooth market last year in spite of all the changes brought on by the pandemic.

“Last year the market was unprecedentedly well run. We were so pleased with it. The new management crushed it, was super involved and engaged in working with the vendors,” he added.

It’s a welcome injection of stability for a market that, along with the changes in venue, has seen some turnover in the manager’s role. Eagles came on last summer just as the market was set for its late-season opening at the SLCC, taking over for Rosanne Clamp, who joined the WFM in May 2019. Clamp, the former producer and coordinator of Vancouver’s Circle Craft Market, took on the role from longtime manager Chris Quinlan, who stepped down following the 2018 season after tensions arose with the WFM board and reports of in-fighting amongst members.

With more lead-in time this year, Eagles said she’s primed to make the market a success in its new home.

“It’s giving us an opportunity to really put our best foot forward this year. With all the added planning time, we’ve had a chance to really build up a strong vendor list,” she said. “We’re really focused on creating variety and knowing that the market will have quite a local presence, creating something the locals can really engage with throughout the season.”

Eagles added that the board would “explore returning to the Upper Village when health orders allow, but our 2021 season home is the Whistler Racket Club.”

Although it will likely take some time and marketing for customers to get used to the new venue, there are some welcome benefits to hosting the market at the Racket Club, said longtime vendor Korey Klein from the Whistler Wood Fired Pizza Company.

“We’re seeing a location here that’s unbelievable,” he said. “People love the farmers’ market, they love attending it, and we’re blessed with this flat space that people could even potentially park the car at, come in, purchase their items and leave. The accessibility is much more fruitful than the Upper Village ever was.”

Some of the vendor offerings this summer include fresh organic produce, new farm vendors featuring meat, honey and seafood products, gluten-free and vegan products, as well as “a range of international flavours including crepes, pizza, pierogis, empanadas, samosas, okonomiyaki, and Mexican dishes,” the market said in a release.

On the craft side of things will be items such as leather goods, beauty and skin products, fibre art, linen clothing, pottery, paper products, glass, wood and metal art, jewelry, and more.

The Racket Club will also animate the market festivities with a range of programming, including roller disco for kids, axe throwing and music.

COVID-19 health and safety protocols will be in place, and customers will be asked to wear face coverings.
For the full list of vendors, visit whistlerfarmersmarket.org/maps.