FORK IN THE ROAD: Finding a new state of grace 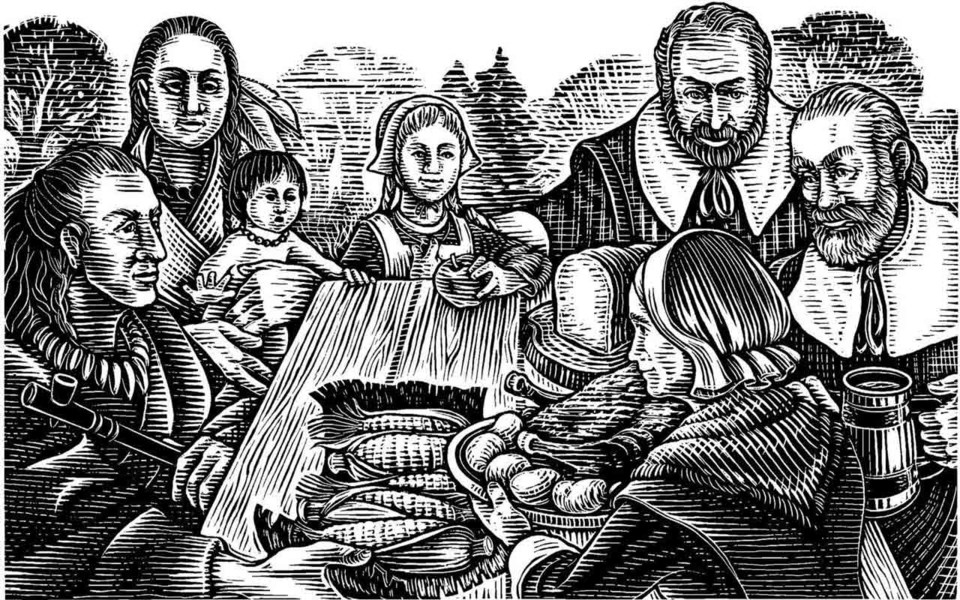 GIVING THANKS Glenda Bartosh looks into how the holiday has changed over the years. IMAGE BY Jupiterimages/Getty Images

It’s been many a year—nearly 400 to be exact—since Thanksgiving, as most North Americans know it, is generally considered to have been first celebrated by Puritan Separatists (later known as Pilgrims) in Plymouth Colony in what today is Massachusetts. Although even this version is contested.

That said, Thanksgiving has been so reinvented and reimagined over the years, it’s no surprise this year will be no exception.

Those early settlers with the unusual black hats who had fled religious persecution in Europe were no doubt grateful for much that first Thanksgiving, including the freedom to live as they wanted, and the kindness and generosity of Indigenous people without whom they never would have made it through their first year.

Of course, original peoples, wherever they lived in North America, had their own unique traditions of acknowledging the goodness and food that supported their lives long before any Europeans arrived, including the members of the Wampanoag tribe who helped those first settlers.

Our Canadian ideas about Thanksgiving also started back at that early Plymouth feast, but it wasn’t until 1879 that Canada, as a nation, marked its first official Thanksgiving.

Overall, we’ve had lots of time to shape our traditions and customs. But this, our first and, most probably, not our last Thanksgiving in a pandemic, we’ll be creating our own unique versions of how to safely share the tradition.

Will it be virtual Zoom or Skype dinners held remotely with loved ones? Real dinners confined to our own little household bubbles, as advised? Maybe even doing it in quilty jackets, out on the patio with a barbecued bird?

However you create a happy but safe way to spend it, don’t forget that at the heart of any Thanksgiving lies the simple idea of gratitude.

By my Oxford Dictionary of Word Histories, the words “grace,” “grateful,” “gratitude” and even “gratuity” all come from the same root: the Latin gratus meaning “pleasing” or “thankful.” “Thanks,” on the other hand, comes from the Old English thancas, the plural of thanc, which meant “kindly thought or gratitude”, which is Germanic in origin and, surprisingly, related to the English word “think.”

On the other hand, we seem to get much more excited about something when it’s gratis, meaning free. Gratis, by the way, is a contraction of the Latin gratiis, meaning “as a kindness,” from gratia meaning “grace” or “kindness,” echoed in the Spanish gracias—all of it flowing from the same wellspring of pleasing or being pleased, receiving or bestowing kindness, thanking or being thanked.

When I imagine those early settlers in Plymouth and compare them to us today, it strikes me that gratus is pretty much missing in life today at the best of times. Even with the pandemic, states of grace and gratitude have generally been relegated to moments of religious or contemplative practice, for those who do such things.

Other than the odd “thank goodness” moment when somebody running a red light whizzes past the front bumper of your car, or a sigh of relief when your loved one’s COVID-19 test results come back negative, most of us seldom express real gratitude. It seems that the more we have, the more likely we are to take it for granted and the less likely we are to feel thankful.

Barry Schwartz explored all this a few years back in his interesting book, The Paradox of Choice: Why More is Less. In it, he documents, in just one example, the 85 kinds of crackers, 285 different cookies, 95 variations of snacks like chips and pretzels, 230 soup offerings and 175 different salad dressings found in local grocery stores.

But maybe with our lives now pared back by this virus, we’re more open to experiencing gratitude, even for things we once took for granted.

To try and picture what gratitude might have looked like in simpler times, before 200-plus kinds of cookies, I’m looking at Jennie Brownscombe’s 1914 oil painting, The First Thanksgiving at Plymouth which hangs in Pilgrim Hall in Plymouth. It’s a strange, idealized representation with the supposed first Thanksgiving meal served up in a pastoral field on a long table covered in a white tablecloth and laden with elegant dishes and silverware, glowing peachy-violet light all around. The whole thing looks a bit posh, like a contemporary Feast of Fields in Pemberton.

The scene is dominated by well-dressed, well-groomed people in a state of reverential prayer. Supposedly they are Pilgrims, though in their fine suits and white lace collars, they more resemble Victorians. At the far end, several Indigenous people sit impassively—present, but of little significance to the central event.

I’m not a historian, but Jean Leone Ferris’s painting The First Thanksgiving, 1621, also from the 1900s, seems somewhat more authentic and illuminating. Outside a rustic log house, there’s a thick-planked wooden table holding a few simple dishes. We also see a spent cooking fire and food bits strewn about on the ground. A hungry-looking dog takes it all in.

No one is at the table, and no one is engaged in reverential prayer. All the focus is on a woman serving a platter of food to several Indigenous people. The atmosphere is pleasant and unpretentious, and can only be interpreted as reciprocating generosity. It makes for a simple but heartfelt notion of Thanksgiving.

However you interpret this unusual Thanksgiving, be it with dogs round a campfire or with white linen and crystal, I hope you make it safe, make it your own, and think about all the reasons you have to be grateful.

Glenda Bartosh is an award-winning journalist who will be gratefully spending this Thanksgiving in her tiny but lovely family bubble.