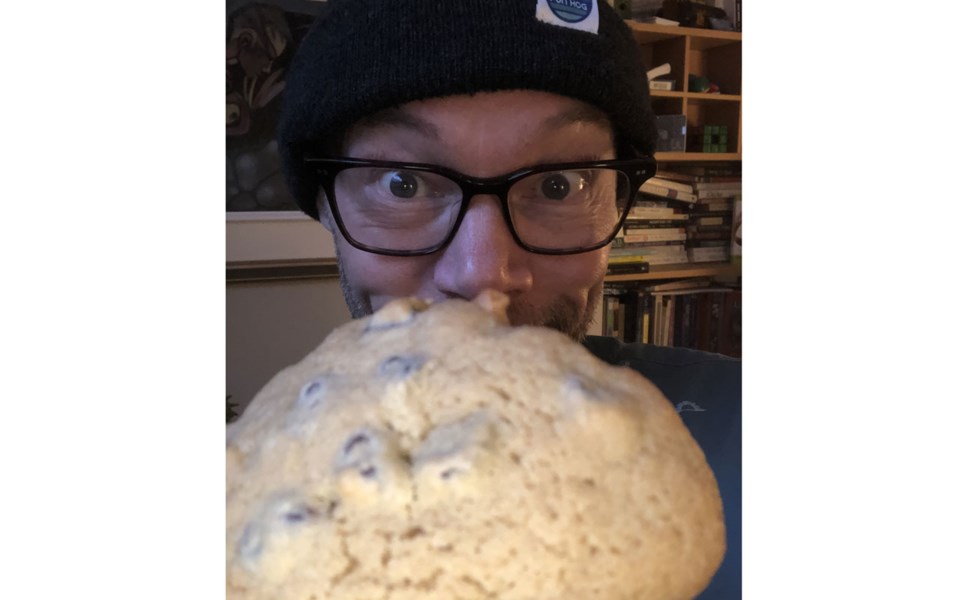 “Stay safe!” we urge one another at the bottom of emails and texts, or at the end of a phone call or (safely distanced) real-life encounter.

It’s the trope du monde for wishing well the person from whom we’re taking our leave, be they friend, neighbour, loved one or simply someone we meet at the grocery store, much as we used to say “take care” or “have fun.” These, in turn, had pretty much replaced “goodbye,” which by my Oxford English Dictionary, is a contraction of the 16th-century farewell or parting, “God be with you” or “God be wy you” or “God b’yu.” It’s sweet how language evolves.

I venture what we really mean now when urging each other to “stay safe” is for people to stay well in all regards, and that includes emotionally and psychologically. So I wanted to learn from an expert in such matters—what their tips were for staying well one year into the pandemic, as well as any eating tips and their own food habits.

Clinical counsellor Greg McDonnell has been part of the local scene for years. He’s the former executive director of Whistler Community Services Society, and has had his own private practice for ages. Safe to say, he’s one of the most respected and well-loved counsellors around. As you can imagine, he’s also a pretty busy guy.

In a nutshell, lately Greg’s been working on the idea of being anti-fragile, and helping people to learn to expect chaos in life. He says we’re basically in denial if we’re expecting life to go a certain way and everything’s going to be lollipops and rainbows.

“Unfortunately, that’s not the human experience, and COVID-19 brings that into stark contrast for us,” he explains. To wit, Greg’s email sign-off, which reads something like a Buddhist tenet and is actually a quote from cultural activist Stephen Jenkinson: “...how about holding dear the fact that nothing you hold dear, lasts.”

A lot of people are feeling pretty hopeless right now, Greg notes, maybe it’s the first time in any of our lifetimes we’ve seen such a sense of hopelessness. So here are three things that can give us hope:

No. 1: A set of personal values we’re really committed to. To illustrate that he uses a metaphor: “Think like a salmon, act like a coyote,” meaning think like a salmon, which points to always returning to home waters, and not abandoning the idea of family, whatever form it takes. As for the coyote part, that’s all about resiliency.

“A coyote is very resilient. It doesn’t make meaning out of something that doesn’t go right for it, so it hustles and looks for a new beginning elsewhere,” he says.

No. 2: Have a sense of purpose and meaning. Here, he adds a food angle. “Early pandemic what did we see? Everyone posting pictures of their sourdough bread, and their jars of jam. Or maybe they were learning to garden,” he says. Greg calls these old-time skills, which older people tend to be really good at because they needed such things to ground their nervous systems through their own challenges after experiencing something like war or the Great Depression.

According to Greg, we all have identity structures—things that define us. In Whistler, it might be athletics, the type of car you drive, or the wealth you amass. For young adults, it might be last night’s party. People with a broad identity structure tend to be psychologically well, so learning something new like making cookies or how to sew broadens our identities.

The third thing that builds hope is community: “being connected to a community of people who feed your soul, who enrich you.” Maybe these are mentors, or a chosen family because you don’t live near your family, but it’s connecting to “people who feed you in some way, not people who suck you dry.”

Speaking of feeding, I asked Greg how important it is to eat well in these challenging times.

“It’s incredibly important, he says. “It’s nourishing the foundation, so things like sleep, eating well, minimizing or avoiding alcohol, certainly during stressful times—those are baseline self-care concepts,” adding that even he doesn’t always get it right. But he knows enough if he’s had a tough weekend to get to bed early rather than numbing himself out on the couch watching Netflix.

As for keeping himself well-nourished—think of all our health-care providers who have to keep themselves healthy and well-fuelled during these busy, busy times—Greg is very grateful he’s part of a family team. On Sundays, Spud Delivery brings their order and they make a food plan for the week, later shopping for whatever else they need.

Mexican food is a fave—it reminds them of holidays and surfing. Overall, though, they’re ovo-lacto pescatarians, meaning eggs, yogurt and cheese (but no milk); and fish are OK, but they stay away from red meat. As for staying fuelled at work, Greg often brings leftovers from home.

“Today I’m looking at my desk right now, and I have a paprika, yam, roasted-pepper burrito with white beans and cheddar cheese left over from last night’s dinner.”

He tries to avoid the posh chocolate chip cookies at Forecast Coffee below his office in Function Junction, but he also recognizes when stress levels are high, he tends to reach for the simple sugars and carbs, just like most of us.

As for his go-to comfort food, it’s tomato soup, grilled cheese sandwich and a dill pickle, like his dad from Edmonton used to make him for school lunches when he was a kid.

Glenda Bartosh is an award-winning journalist who finds much joy in bananas—and chocolate.