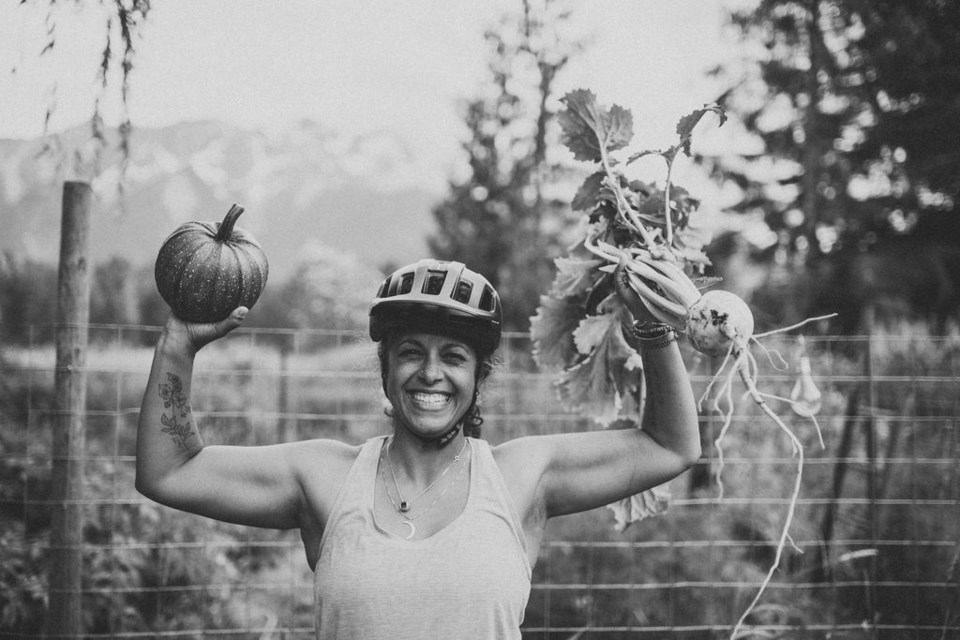 Green Moustache founder and nutritionist Nicolette Richer will travel more than 7,000 kilometres on bike and foot next year to raise awareness of the ways diet can help reverse chronic disease. Photo submitted

Most Whistlerites are pretty good at striking a work-life balance that tends to weigh more towards the “life” side of the scale than the “work” part. But nutritionist, educator and restaurateur Nicolette Richer may have found just the right project to land at a perfect balance that speaks to her business experience, passions and desire to live an active, healthy lifestyle.

It’s just going to require her to bike and run more than 7,000 kilometres across the country.

The co-founder of vegan, whole food café Green Moustache, which now counts five locations in Canada, and nutritional consultants Richer Health, Richer found herself stuck behind a desk more often than she’d like. A big proponent of the ways diet can help those dealing with chronic diseases, she wanted to practice what she preached and “get out from the computer.”

“When I thought about it, I was like, ‘Well, we have a deep need for communities across Canada to learn about food as medicine,’ so how do we educate? What’s the best way to do that? Face-to-face has always been the best way to connect with people,” Richer added.

Those complementary goals soon meshed into a concept: 22 Million Strong.

On June 1, 2021, Richer will set off from Victoria and make the planned 75-day trek on bike and foot to St. John’s, Nfld., stopping along the way to meet with physicians and Indigenous communities—which are disproportionately impacted by certain chronic diseases—to speak about the role diet can play to not only prevent certain diseases, but help reverse them.

While the exact route is still being finalized, Richer plans to stay close to the U.S. border for much of her trip. Her route will take some crucial detours, however, so she can visit certain remote Indigenous communities, like in northern Saskatchewan, where the suicide rate is consistently higher than the rest of the province. Suicide is the leading cause of death for people aged 10 to 49 in northern Saskatchewan.

Aiming to bike 80 km and run 20 km a day, in the evenings, Richer said she plans to host “circle dinners” in Indigenous communities to connect with locals and gather research data alongside them. Her research is centred on “de-colonizing food systems to reverse the leading chronic diseases, like Type 2 diabetes, which affects Indigenous members at higher rates than non-Indigenous members,” she noted in a follow-up email, “the causes of which are attributed to trauma from being moved off their lands, separation from their traditional food systems, residential schools, and so many more injustices.”

22 Million Strong is named after the 10 per cent of North Americans who deal with chronic disease, and Richer also hopes her nation-spanning trek will reach at least that many people.

“We know from the work we do that when we educate one person, they inspire 10 other people to also go and change their diet, their lifestyle,” Richer noted. “We thought we can crush the chronic disease epidemic by hitting that goal in the next decade.”

The campaign will also be combined with Richer’s PhD dissertation at Royal Roads University, which is focused on traditional food systems and how they can specifically help reverse Type 2 diabetes in Indigenous communities. The work will also include a documentary capturing her journey.

On that front, Richer has been training up to five hours a day and is working with vegan nutritionist Luckie Sigouin, local trainer Meaghan Sutter, as well as ultra-endurance athlete and Olympic swimmer Chris Hauth to get herself in shape by next summer.

“I wake up every day feeling like a brand-new person,” she said of her rigorous training regimen. “I’m not the same person I was when we first started thinking about this.”