In the kitchen: Canning crab apples with Dawn Johnson

Crab apples have a bad name. They are, after all, the punier, less polished and tarter version of their infamous cousins. And yet, just ask Pemberton's black bears to vouch for the common crab apple.
Sep 3, 2014 6:00 PM By: Alison Taylor 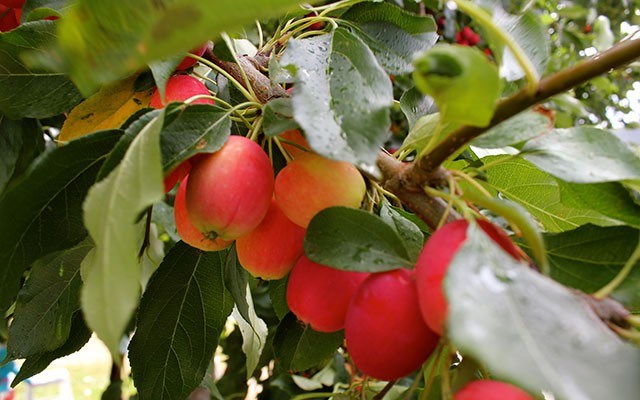 Crab apples have a bad name. They are, after all, the punier, less polished and tarter version of their infamous cousins.

And yet, just ask Pemberton's black bears to vouch for the common crab apple. The 22 mature crab apple trees lining the route into the village have been a favourite feasting ground for the local bears, so much so that it's become a growing problem.

The solution, however, is clever and delicious — the Pemberton Crab Apple Project.

Pick the fruit to get rid of the bear attractant, turn the fruit into sauce and jelly, sell the final product to fund the project next year.

And in the meantime learn about the importance of:

"Crab apples are one of those things where a lot of people know what they are but a lot of people don't actually eat them... and they're delicious," said Dawn Johnson of the Stewardship Pemberton Society.

The project is Johnson's brainchild.

Out of 637 pounds of crab apples picked to date, about half have been turned into crab apple sauce and jelly — more than 30 litres of each to be precise.

And there's more to come.

While the bulk of the fruit has been harvested with the help of little, and bigger, hands, save in a few hard to reach places, there is still a lot of work to do in the kitchen.

"They don't actually have a really long shelf life once they're picked, so what we can get through, we have been turning into crab apple sauce and crab apple jelly," said Johnson.

And while admittedly it's little more tart than conventional applesauce, the end result is a beautiful pink sauce that is very refreshing.

"The excess sauce and jelly will be sold at the local farmers' markets to raise funds for the project for next year," she added.

The crab apple trees were planted more than 20 years ago in honour, and in memory, of Pembertonians and local war veterans.

"A lot of local families feel strongly about keeping the trees," said Johnson. "So although there was elevated levels of human bear conflict because of the fruit, the Village of Pemberton really did not want to have to cut the trees down because of the conflict. So this is a great solution."

On one of the first days of picking, for example, a large black bear was comfortably centre stage among the crab apple trees.

When asked if the project is working to dissuade the bears from coming to the centre of town, Johnson said that's a difficult thing to measure.

"The level of human/bear conflict has so much to do with the natural abundance of food in the wild," she said, adding that the hot, dry conditions this summer have meant poor berry crops and not a lot of available food for the bears.

Johnson sees this project, funded by the Squamish Climate Action Network, the Community Foundation of Whistler, the Village of Pemberton, the Squamish Lillooet Regional District, and Innergex, as a stepping-stone for bigger things to come.

Stewardship Pemberton could act as a liaison for people who have fruit trees and don't want to pick them, and the others who are looking for fruit.

That, however, may be in the years to come.

In the meantime, Johnson and others will be in the kitchen getting product ready for the Pemberton Fall Fair on Sunday Sept. 7 and the Pemberton Farmers' Market on Wednesday Sept. 17. Or large quantities can be purchased by emailing: stewardshippemberton@gmail.com

The essence of fall: Crabapple Jelly

Wash crabapples. Remove stem and blossom ends. Do not peel or core. To prepare juice, combine crabapples with enough water to cover in a Dutch oven. Bring mixture to a boil; reduce heat and simmer, covered, until crabapples are soft. Mash crabapples occasionally while cooking. Strain through a jelly bag. Measure juice and pour into large saucepan. Add 3/4 cup (175 ml) sugar for each cup (250 mL) of juice. Stir until sugar is dissolved. Bring mixture to a boil, stirring constantly. Boil rapidly until jelly stage is reached, about 20 minutes, stirring occasionally. Remove from heat and skim foam. Pour into hot sterilized half-pint (250 ml) or pint (500 ml) jars, leaving 1/4 inch (6 mm) headspace. Wipe jar rims thoroughly with a clean damp cloth. Seal and process in a boiling water bath for 10 minutes.

Try glazing pork roast with crab apple jelly, spreading it on toast or bagels in the morning, or with cream cheese and crackers.