Mile One owners purchase historic cattle ranch in the Chilcotins

'The idea is to grow the production side and do something we're really passionate about'
Jan 25, 2017 5:00 PM By: Brandon Barrett 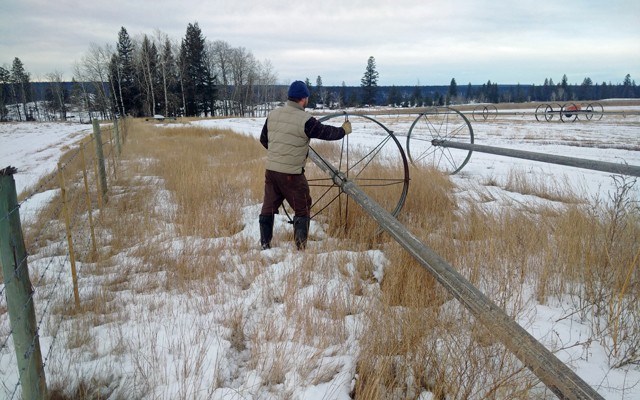 Randy Jones describes himself as a "beef guy."

This shouldn't surprise anyone who's had the good fortune of sitting down for a mouth-watering burger at the chef-owner's Mile One Eating House, Pemberton's award-winning rustic casual restaurant. But Jones has taken that obsession with beef one step further as the newly minted owner of a historic cattle ranch in the heart of the Chilcotins.

"It was something I really wanted to do. There were so many opportunities to do a second or third Mile One Eating House somewhere else ... but opening more restaurants is not where our current passion lies," explained Jones, whose restaurant has enjoyed tremendous growth since opening in 2011. "There was still a passion to grow, and the idea is to grow the production side and do something we are really passionate about."

With a "deep love" for the rugged Chilcotins, Jones has big plans for the 259-hectare property. First and foremost, Jones and his crew will have to familiarize themselves with the century-old ranch, which has fallen into some disrepair over the years. Eventually, the goal is to introduce a herd of cattle that will enjoy an all-natural, grass-fed diet that Mile One chefs will be able to take full advantage of on their menu.

He admits there will be a bit of a learning curve.

For those of you worried that Mile One is messing with a good thing, fear not: there are no plans to switch out the restaurant's Cache Creek Pemberton Meadows' beef just yet.

"I will never undermine what we serve right now. It's virtually impossible to improve on that," said Jones, who added that the more likely approach would be to bring in whole steers for one-off dinners and to sell specialty cuts in the restaurant's market space.

"In the shorter to medium term, we'll be able to bring in the odd steer from the ranch, break down that animal and have that opportunity to taste some different steaks, try some different stewing meats and sell some grass-fed beef bones to make broth at home. We'll get to introduce this special act every once in a while."

Although the ranch may afford Jones business opportunities that fall outside of the restaurant — the farm's production capacity goes well beyond the needs of Mile One — he's the first to admit this project is not about making money.

"It's way easier to call the big-box supplier... and have the product dropped off on your back loading dock perfectly cut, in the box and wrapped. That is easier and probably in some cases more cost effective, but we lose a bit of the passion and story component of it," he said.

"It speaks to why we didn't go off on the tangent of opening another location and adding even more space. You make the financial and the business case around restaurants, but most people who get into the business do it for a real love of food. They're not hardened accountants, it's not all about the numbers. You've got the creative and the entrepreneurial side as well, and this checked so many boxes that just so happened to tie in perfectly with the beef side of Mile One."

With more of his time committed to the ranch, Jones recently promoted Whistler-born Erin Kerr to chef de cuisine.

"It's allowed someone who's been with us (since the restaurant opened), and who's proven she can do the job and is very talented, to take over the culinary side of Mile One," noted Jones.

The series is yet another way Mile One is positioning itself as the community hub for Pembertonians.

"The burgers and mac and cheese pay the bills at Mile One, but we have the opportunity to play with the more creative, finer touches," Jones said. "It's about connecting with people and bringing the product to the table."