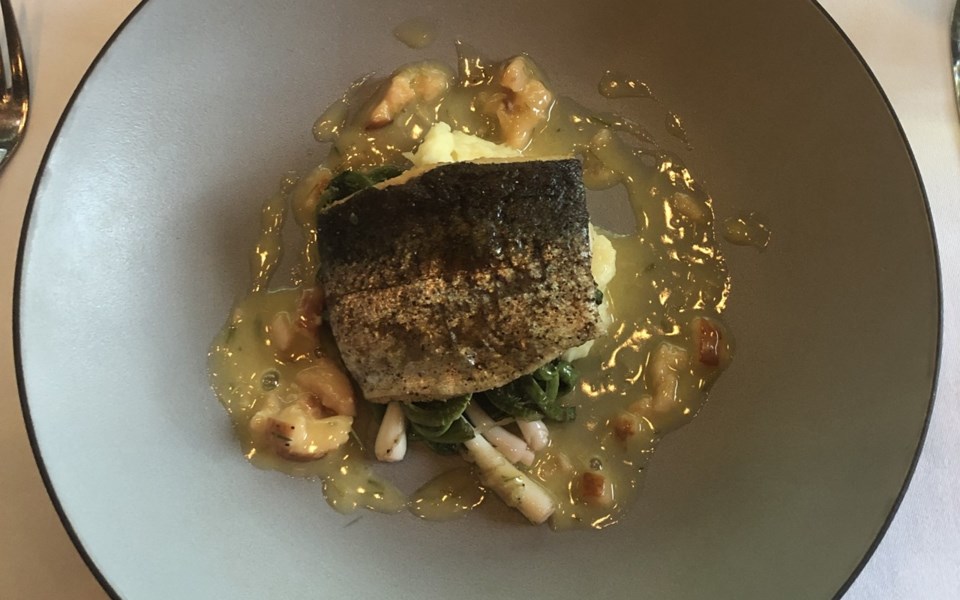 over the rainbow N'Quatqua rainbow trout was the main attraction of a recent seafood dinner at the Fairmont Chateau Whistler in honour of World Oceans Day. photo by megan lalonde

Fishing has been an essential part of the N'quatqua's way of life for generations—and now the First Nations' band is sharing a taste of that culture with Whistler's largest luxury hotel.

The N'Quatqua band, based primarily out of D'Arcy and the areas surrounding Anderson Lake, has for nearly 20 years farmed rainbow trout for purchase. But it's only recently that the band has expanded its reach by increasing production and marketing efforts, explained band administrator Lucinda Phillips.

"Before, we were only ordering about 10,000 eggs per year and we were selling it locally, or sometimes we would sell at the Pemberton (farmers) market. This was years and years ago. It wasn't breaking even," she said. "About two or three years ago, we ordered 60,000, maybe 70,000 eggs ... and in order to be sustainable, we had to go big or not bother. So we went big and it's coming along really nicely."

An avid fisherman himself, Bendig is always on the lookout for sustainable food sources—which has long been a priority at the Fairmont, but has been redoubled recently with its involvement in Accor Hotels' Planet 21 initiative, designed to drive positive and sustainable hospitality. As part of that effort, the Fairmont is looking to make the Wildflower menu, in particular, as sustainable as possible. That means, using grass-fed beef from the Hanceville Cattle Company, purchasing an entire flock of lamb directly from a Pemberton farm, and, of course, bringing in rainbow trout from the N'Quatqua.

"We're trying to get these products that not only have the safety of the animals and the best rearing processes in mind ... but that make our carbon footprint as minimal as we can make it—and we're getting a great product to our guests," Bendig said.

"There is great farmed fish; it's just a matter of having the understanding of what is a good farmed fish and what is a problem," Bendig said. "We know they're not using any sort of antibiotics, we know that they're not using pesticides and all these things in the system, so you know you're getting clean, fresh food."

Dishing out a quality, flavourful product, the top priority of any chef worth his salt, is another intended side effect of Bendig's commitment to sustainability.

"Bottom line, I'm in the business of delivering flavour to people, and if I didn't think these products were good then I wouldn't use them. But they are. The quality is there, the flavour is there and the rest makes it even better," he added.

Currently, the land farm provides temporary work for about half a dozen N'Quatqua members, turning a generations-long way of life into gainful employment. The N'Quatqua has also worked with several local schools to educate students on the hatchery process.

"Fish are very important to First Nations people and living off of fish especially. To me, this project was very exciting when I first started working up in N'Quatqua because I love to fish, eat fish and preserve fish," said Phillips. "To be able to see and witness it, from the eggs to marketing, is pretty amazing."

Although the N'Quatqua work with a handful of Lower Mainland distributors, the Fairmont remains the only restaurant the band has partnered with so far. That, according to Phillips, is something the band is eager to change.

"We definitely want this program to carry its own weight and sustain itself, but also expanding it and trying to keep it local throughout the Sea to Sky corridor, trying to keep it local with the restaurants, whether it's Pemberton or Whistler, and really using it as an educational tool for any and all members that are interested," she said.