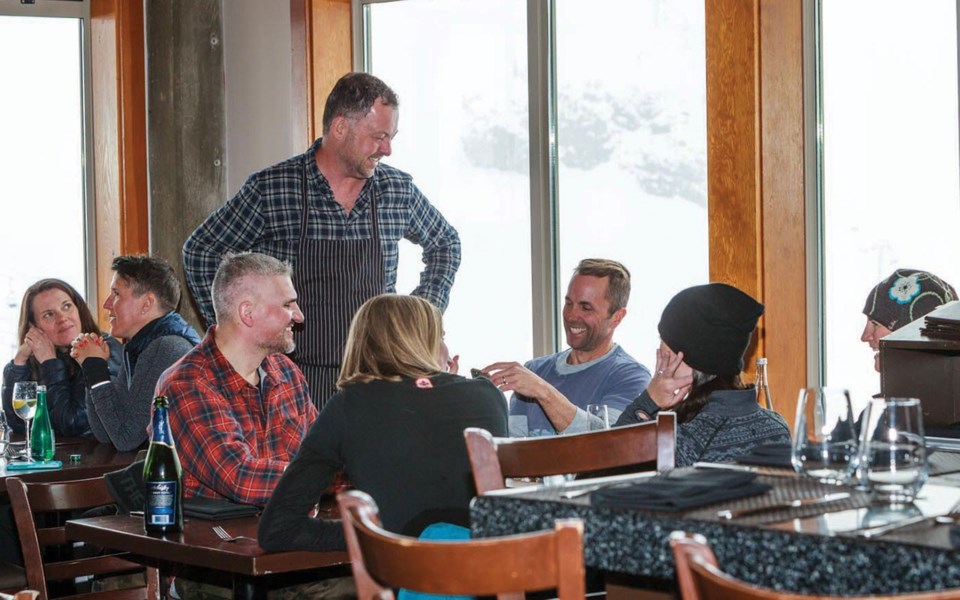 Several years ago, iconic Vancouver chef and restaurateur David Hawksworth was taking a break from skiing on Whistler Mountain when a resort employee handed him a comment card. But rather than fill it out, he simply scrawled his name and phone number on the card with instructions to call him.

Being the multi-award-winning, BC Restaurant Hall of Famer that he is, it's safe to say Hawksworth's thoughts on the culinary offerings at Whistler Blackcomb (WB) probably hold more weight than the average skier's. So it was no surprise when Hawksworth got a call from Paul Street, WB's vice-president of food and beverage, a few days later.

"I've been lucky enough to ski in Europe, the States and across Canada a little bit, and I just had some ideas and thoughts and feel very passionately about them sometimes," Hawksworth said. "I think great food and great skiing really go hand in hand, and I just wanted to help."

Hawksworth is now in his fifth year hosting a popular pop-up lunch series at Steeps, and has worked with WB to train chefs at his eponymous Vancouver restaurant, and even consulted on the menus at Steeps and Christine's, which have since become the two highest-rated restaurants across all of Vail Resorts' resorts.

Hawksworth's cooking style is defined by its simplicity. He tends to favour rustic, family-style meals made with premium, local ingredients. By his own admission, he's not reinventing the wheel, just getting back to the foundations of cooking that he honed in Michelin-starred kitchens across Europe.

"We're just trying to find the best products that make the most sense and keep it simple and efficient and let everybody do their job and clear out all that other noise around presentation," he said. "Obviously, presentation is extremely important, but it's about the quality of the product. It all comes together very nicely."

WB—and by extension, Hawksworth—has transformed its on-mountain dining in recent years, challenging the long-held notion that ski food can't reach the same heights as its fine-dining contemporaries in the valley.

Of course, elevating cuisine at such, er, elevation comes with its own distinct set of challenges.

"You're threading a needle. It is tricky. You look at that Glacier Lodge and you look at how many people go in there and you look at how do you get food there?" he said. "There are a lot of logistical things to figure out and when those doors open and people are hungry, it better be organized."

A long-time avid skier, Hawksworth has contemplated expanding his restaurant empire into Whistler—but not with the resort's housing and labour shortages still ongoing.

"I'd love to do it, but the infrastructure just is not there in Whistler right now. I know all of the restaurateurs up there and everybody's complaint is about staff housing," he said. "Until that gets sorted out, I'm not entering that game."

Following a sellout lunch on Jan. 11, the next instalment in Hawksworth's pop-up series at Steeps is scheduled for Feb. 8 at 11 a.m. Hawksworth said the menu is still in the developmental stage, but will feature hearty variations on dishes at Vancouver's Hawksworth and Nightingale restaurants.

"We end up doing what would really work for when you've just been skiing and you want to warm up. They are dishes we're very familiar with," said Hawksworth. Tickets are $68, and typically sell out fast. The season's final lunch is set for March 14. Advance reservations are strongly recommended by calling 604-905-2379. Visit whistlerblackcomb.com for more information.