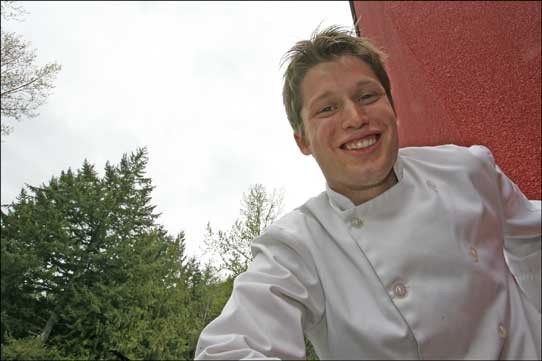 "I don’t believe in last-minute meals. You’re always going to eat so you should always have something ready." Jipsea Levan, Millar Creek Cafe. Photo by Maureen Provencal

"The only other guy who knows how to cook at Millar Creek Cafe, besides the owner"

Photo and questions by Maureen Provençal

PQ: How would you describe what it is like to be a chef?

PQ: One food you can’t live without?

PQ: One ingredient you can’t live without?

PQ: What food should people be more open to trying?

PQ: Exact moment you decided to become a chef?

JL: When the government told me they would pay me to go to school.

PQ: Most interesting environment you’ve ever worked in?

PQ: What’s your solution for a last-minute meal?

JL: I don’t believe in last-minute meals. You’re always going to eat so you should always have something ready.

JL: Food as a religion.

JL: Getting into Quick Bites in Pique Newsmagazine .

PQ: Where would you go to eat if you could go anywhere in the world?

JL: The Flaming Chicken Restaurant in Bangkok. They soak a chicken in brandy, light it on fire, put it in a catapult and launch it to your table, where your unicycling waiter will catch it and serve it to you.

PQ: What brought you to Whistler?

PQ: Who has been the most influential person on your cooking/career?

PQ: What would you advise anyone wanting to get into this industry?

JL: Further up the ladder you get, the more you have to work.

PQ: What is the most important principle in cooking?

JL: Cook it till it’s done.

PQ: Do you dream of opening your own restaurant?

JL: Only when I really hate myself.