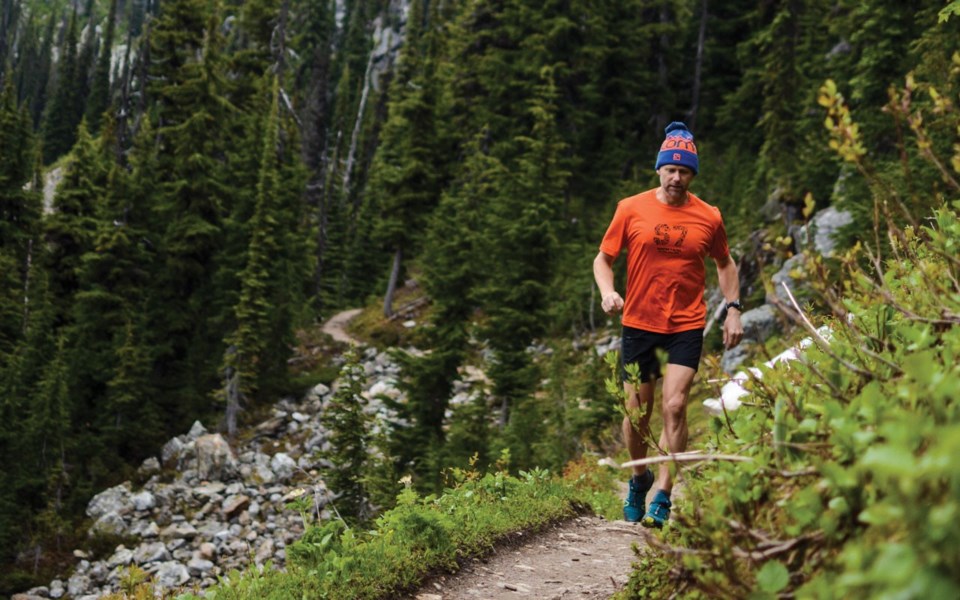 STERR IT UP Whistler Blackcomb executive chef Wolfgang Sterr has special insight into nutrition for his athletic pursuit of ultrarunning. Photo courtesy of Wolfgang Sterr

It might be somewhat counterintuitive, but when Whistler Blackcomb (WB) executive chef and ultrarunner Wolfgang Sterr sought to increase his distance goals, one of the areas he struggled was figuring out his nutrition.

It was the biggest learning curve Sterr faced as he made the jump from the 5 Peaks Trail Running Series and its 10-to-15-kilometre offerings to longer distances, starting at 25 km such as the Comfortably Numb and Rubble Creek Classic races. However, as Sterr had his eureka moments, he was eventually able to conquer his first ultra in 2016 with the Squamish 50s' 50-mile (80 km) race. Among the discoveries were finding a proper level of fluid intake and what foods work or don't work with him.

"I've learned a lot about the way my body functions, what it likes and what it doesn't like, what salt intake does for your muscles and cramping," he said. "My work does help me with that because I have a lot of nutritional information I learned in school and over the years."

On course, Sterr attempts to require minimal nutrition, though he will eat foods such as dates and avocado in small doses when he requires a boost. Instead, he focuses on his diet in order to remain consistent when running.

"Whole foods and a high-fat diet definitely makes it easier for my system because after two-to-three hours, you're switching from glucose burning to fat burning, and it's that transition that's very difficult," he said, noting he sometimes takes ketones to aid in the transition. "I have 50,000 calories at my disposal that I can flush out with proper hydration and proper sodium intake for the following hours."

Sterr, a vegetarian, loves eggs and cheese and consumes them regularly. He explained that his diet doesn't generally cause any complications on raceday.

"Sometimes it's a bit more difficult, especially when you're travelling, but in a race, it makes really no difference because you can get your protein from different legumes or other protein sources," he said. "I find that people think they need to eat more protein than they actually do, even when they're on a heavy training load.

"I find it's a lot more important to have proper hydration and eat a lot of microgreens and antioxidant-rich foods in a balanced approach."

While Sterr said his athletic activity hasn't gone on to directly impact the offerings at WB in terms of him introducing what he makes for himself to the menus, he remains steadfast in not serving visitors anything he wouldn't want to put in his own body.

"We look for better food, cleaner food on the mountain to fuel our guests to pursue their passions," he said. "There is a correlation there because I'm usually the one that says, 'Where is it sourced from? Can we trace it back? What's the quality of the product?'"

In his role as WB's executive chef, in which he's served since 2011, Sterr is responsible for menu development for the resort's quick-serve and full-serve restaurants. His other duties involve leading supplier relations, monitoring food safety and helping with an apprenticeship program to get young people into the industry.

While it might be difficult to pursue both at a high level, Sterr said it generally works that the mountain's high season runs opposite to his major training blocks. As well, he said WB has the trust in him to manage his own time for both.

"I work for an organization that understands that people pursue their passions at work as well as outside of work," he said. "If I have time in the afternoon when I have nothing going on and feel like it'll help me perform better at work, I can go for an hour hike or an hour run, then it's up to me to manage my time to make sure that I get all the jobs done. It doesn't matter when I get them done, as long as I hit the deadlines."

Sterr, who turned 50 this year, made a point of running five ultramarathons to mark each of his five decades. No. 4 is coming this Saturday in the form of the 110-km Whistler Alpine Meadows trail race.

Sterr explained that his athletic pursuit is a welcome contrast to the hustle and bustle of a chef's life.

"It's just the serenity out on course. I love running at night. I love running in the winter," he said. "It gives me peace of mind because it gets you away from the obsessive thinking that we all have, because the only thing you can do is focus on the 10 feet in front of you.

"It's almost a meditative state you get into with the discomfort of your body around you, but you get to places within you that you will not reach unless you break the body down. You get to experience yourself more—your true self."