The gift of elders

It was hard not to imagine that someone let loose an art farm in the gym. An elementary school assembly is so full of twitchy energy.
Jul 1, 2019 9:00 AM By: Lisa Richardson 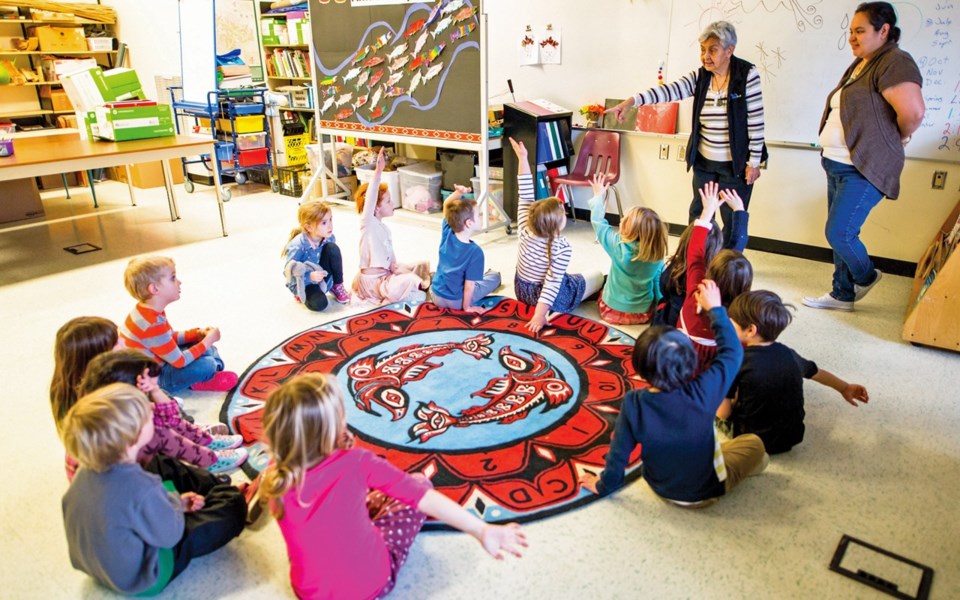 CELEBRATING ELDERS Veronica Bikadi and Heather Joseph teach a Kindergarten class the Ucwalmictws language, at Signal Hill. The students learn about their culture and language along with wool-weaving and meta principles like Célhcelh (feeling connected when working as a team) and Kat'íl'a (seeking spaces of stillness and quietness amidst our busyness and quest for knowledge). Photo by Natalie Langmann

It was hard not to imagine that someone let loose an art farm in the gym. An elementary school assembly is so full of twitchy energy. I half-wondered what possessed me to take up the open invitation to attend the National Indigenous People's Day Celebration Assembly on a full moon at Signal Hill Elementary School and immerse myself in the general end-of-year restlessness, but I came because it's a privilege to get a peek inside this space where my son has been spending his days.

And I want to declare myself an ally.

Being an ally, says Amnesty International, involves "a lot of self-reflection, education and listening. It means knowing we're often coming into this space from a position of power and privilege. Privilege that we've gained through unjust systems that marginalize the groups we seek to ally with. It's not enough to show up in solidarity and speak out against the unjust system, we have to do what is within our power to dismantle the system and differentiate ourselves from the opponents of these groups. We have to change our own behaviours and be mindful that we are not contributing to keeping that system going." I sit in the gym knowing that the kids aren't the only ones here on a learning journey.

My son had his first language class 13 days into Kindergarten. He didn't know any French, he didn't know the English alphabet, he could count to 20 with the appearance of a few rogue numbers like eleventy-hundred—but there he was learning Ucwalmícwts.

When he started Kindergarten, I mostly hoped he would learn some positive social skills and gain a general enthusiasm for learning. (It felt important to keep my expectations low and non-specific.) This year, in addition to all the things he's absorbed with his main (and wonderful) dedicated teacher in his art, music and PE classes, he's also had the chance to learn under the guidance of language and culture teachers, with the support of elders Mary Ann Narcisse and Veronica Bikadi, things like traditional wool-weaving, how time is observed, and key Lil'wat learning priniciples such as Kat'íl'a, quiet concentration, and Célhcelh, feeling connected when working as a team.

I watched the assembly of kids, with all their mix of heritages, and wondered if they understood the significance of this sharing—that they get to learn this culture, language and way of looking at the world, side-by-side, regardless of their cultural identity. Do they glimpse the generosity of their teachers as a gift, the way I do?

I wondered if they realize what it means that their principal, Roberta Kubik, in her silver-tassled sneaker-moccasins, makes a territory acknowledgement at the start of assembly, or if they are as inspired as I am when she leads them all around the gym in a dance, moving with a graceful rhythm, holding the collectively woven wool blanket aloft, looking completely at ease. I wondered if they appreciate having an elder pray over them to Creator in the language the land remembers. I wondered if their hearts swelled up when the elder then offered in English that she is proud of them, of all the kids and teachers and the whole school, for this journey they're on and for how much they have learned and how much she is learning from them.

That elder is Bikadi. She has great-great grandchildren, she was sent away to residential school, she has been teaching the language for almost 20 years, through a difficult era with no resources and very little support, and now, here she is, still guiding, still sharing, still serving, pulling this entire school—all of us—into her circle of care.

Bikadi, whose Ucwalmícwts name is Sat, (which sounds to my ears a bit like the word "shout"), meaning "dearest, my favourite one, you stay here," is a fluent speaker—a precious thing in her community.

She had taught the language for 12 years at Pemberton Secondary School, (where she also worked as a special needs assistant for 19 years), before coming out of retirement in 2012 to serve as a language mentor, along with Narcisse, to her granddaughter, their language teacher, when Signal Hill's current culture and language program came into being, the result of an Aboriginal Enhancement Agreement negotiated between the school district and the Squamish, N'Quatqua, Lílwat, Samahquam, Skatin and Xa'Xtsa Nations, to enhance aboriginal learning.

Two decades ago, there wasn't a lot of support for Ucwalmícwts language teachers. And there were no resources. "I phoned a friend in Lillooet who was teaching there at the public school and he said, 'I'm just winging it. I'm in the same boat as you are,'" remembers Bikadi. She'd look up Kindergarten lesson plans online and search for things that were appropriate for high schoolers, and then literally crafted her own curriculum, applying the Total Physical Response language acquisition methodology that she had been taught at the Chief Atahm school on the Adams Lake reserve near Chase, where that community's efforts to revive the Secwepemc language were being taught to other Indigenous language teachers from all across the province.

Bikadi speaks of herself as lucky to have been raised in a household where the No. 1 language was Ucwalmícwts. Her foster parents were already in their mid-fifties when Bikadi was brought to them and she speaks of them with immense tenderness. Her parents "not only spoke the language, but they walked the walk. Anything that needed doing in the community, they were both ready to be there, to help. I couldn't have asked for better parents. They were very nurturing."

At the front of the gym, as Bikadi closed her eyes and spoke a prayer of thanks in her soft voice, I thought this indeed is something to celebrate—the generosity and hard work of the resilient, tenacious, thoughtful survivors of a cultural genocide, sharing their language and values with a whole generation of vital twitchy moon-filled beings who drum and dance and weave together, side-by-side, day-by-day dismantling an old oppressive system and building a better one in its place.