The heart is a drum

Yvonne Wallace gave herself seven days to close her heart and put it back in her chest, having stretched it as wide and thin as a deer hide to allow her story to resound through it, to sing of bone-truths.
Dec 1, 2019 8:00 AM By: Lisa Richardson 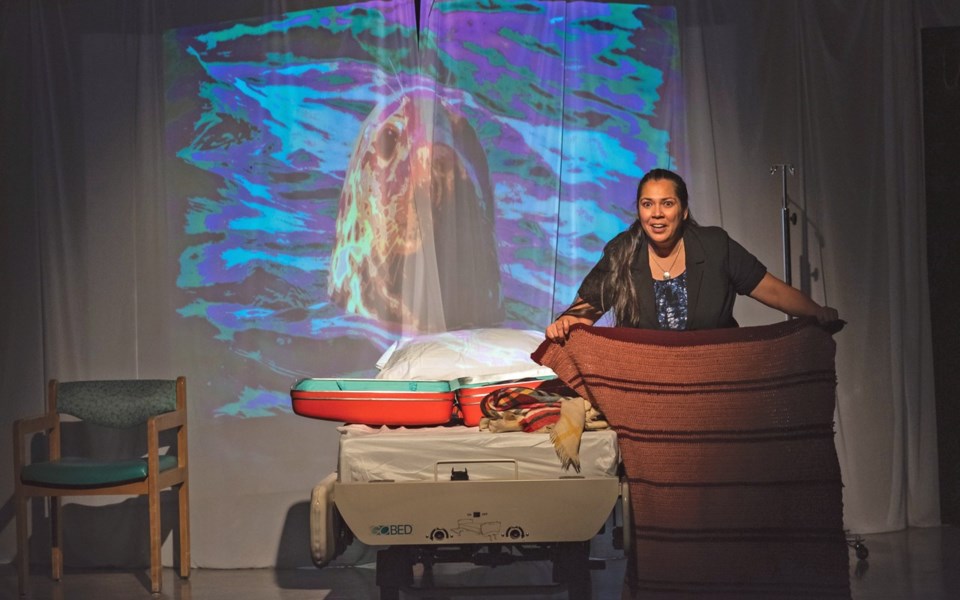 Yvonne Wallace gave herself seven days to close her heart and put it back in her chest, having stretched it as wide and thin as a deer hide to allow her story to resound through it, to sing of bone-truths.

She had performed her one-woman show, útszan, 20 times, from Whistler to Whitehorse, Vancouver to Dawson City—a remarkable enough feat of stamina given that 18 of the shows ran between Sept. 19 and Nov. 3, that the 70-minute performance is in two languages and no crew members were fluent enough in Ucwalmícwts to be able to prompt her if she forgot her lines, and that she was blazing trail all the way, entering into spaces—green rooms, fancy hotels, spotlights—where few Indigenous people are found. Not to mention the additional drain that comes from speaking stories that come from the most raw, emotional places.

"My truth wasn't scary to me," reflected Wallace. "I was living it every day, doing my best not to let intergenerational trauma impact my daughter. What was scary was letting people in to my most vulnerable places. I just prayed that they would be kind. And they were."

The final show played Nov. 3, 2019 in Vancouver's Firehall to a standing ovation. On her 45th birthday.

It had started as an overachiever's idea for the capstone project to complete her Liberal Arts degree at Capilano University—to script and perform a play that was partly in Ucwalmícwts, the language she had returned to formal schooling, after 21 years away, to learn. She wanted to create "a fluency moment"—for herself and the audience, a moment when she knew what she wanted to convey, and successfully did it.

It was also a chance to return to her first love of theatre—a 10-year-long passion that had been abruptly interrupted by a domestic assault, two years after she had completed her acting diploma, with honours, in Toronto. Having sustained a throat injury from the assault, she wanted to reclaim her creative voice, and flip victimhood on its head, but returning to the stage, not fully trusting whether the injury had healed, was, she said, one of her scariest challenges. Singing and speaking two languages for 70 minutes was a lesser-known mountain to climb. She did it because she no longer wanted the incident to dictate her trajectory or her story of herself. Crafting the script was a process that allowed her first to examine victimhood and her relationship to ancestral survival. She trusted that the language would do the rest.

When she'd first tried to return to school, to learn her language, Wallace had attempted to enrol in a First Nations Linguistics course at Simon Fraser University. They wanted her to first complete Grade 11 and 12 math and fulfil some language pre-requisites—in French or Spanish—before she'd be considered.

Living in Vancouver with her eight-year-old daughter, she remembers calling Lisa Fisher at the Lil'wat Nation's Ts'zil Learning Centre in Mount Currie, frustrated to the point of tears. "I run a $2-million budget and they want me to go back and do my high-school math? Doesn't life experience count for anything?"

Fisher's response was immediate and swift. Adult language lessons were on offer five months later at Ts'zil, which Wallace felt obliged to enrol in. Once a week, she'd pick up her daughter at school, drive the highway between Vancouver and Mount Currie in a series of breaking-down jalopies, make her 6 p.m. class, then return home sometime after midnight.

Five years later, Wallace filled a 70-seat theatre at Capilano University with elders, family, friends, colleagues, faculty, and performed her bilingual play. The front row was full of elders, fluent speakers. "They were laughing at the right places, they were present, they received it." The University gave her an outstanding merit of community achievement and engagement award.

She got her degree, an award, she told some deeply personal stories, she kicked ass. She could have been done.

But it was never just about her.

The word she named the play, útszan, means to make something better. She has tucked away tiny pebbles of memories from audiences from all the shows that followed that let her know she has been doing just that: overhearing her beloved language teachers discussing an underused word gifted back to their attention by her play; meeting the last two fluent Hän language speakers in Dawson City and realizing how clearly they got her meaning, her heart's intent, even in a completely different language; creating space for the adult children of Holocaust survivors, from residential school survivors, '60s scoop survivors, survivors of suicide loss, of so many traumas, to have a moment of acknowledgement and recognition; hearing someone admit they would now rewrite an entire just-completed thesis with their newfound perspective on the impacts of colonization. Powerful Indigenous and non-Indigenous responses. Because Wallace bridges those two worlds, too, uniquely poised to give voice to the trials and tribulations of being of mixed identity. Her non-Indigenous father chose her Líl'wat mother, a widow with six children, as his life partner. "There's a line in the play: that nobody really wanted to admit that looking like the white girl on the rez was dangerous for me. We don't talk about it. There's all sorts of travesties we don't talk about," she said.

To find a safe space for those kinds of conversations can seem next to impossible.

"So, let's get you in a dark room, sit you down, lock the doors, and you're going to have to listen," says the woman who came home to her theatre gift. "That's as safe as it gets."

Wallace isn't done with útszan, or with making things better. She has applied to the University of B.C. to do a Masters in Education leadership with a vision to create curriculum across Canada that makes First Language learning easier. This winter, she will work alongside her teacher and mentor, Saẃt Martina Pierre, teaching Ucwalmícwts at Ts'zil two nights a week. And she's already in conversations about further developing and performing her show. "I want this play to be in community spaces, First Nations halls, universities, places where people are open-minded and they're learning. Let's have the most amount of people at the table who are going to collectively make a positive difference. For some, it may be the first time they're exposed to what Indigenous love looks like. It's messy, beautiful, generous, hard."

And full of heart.