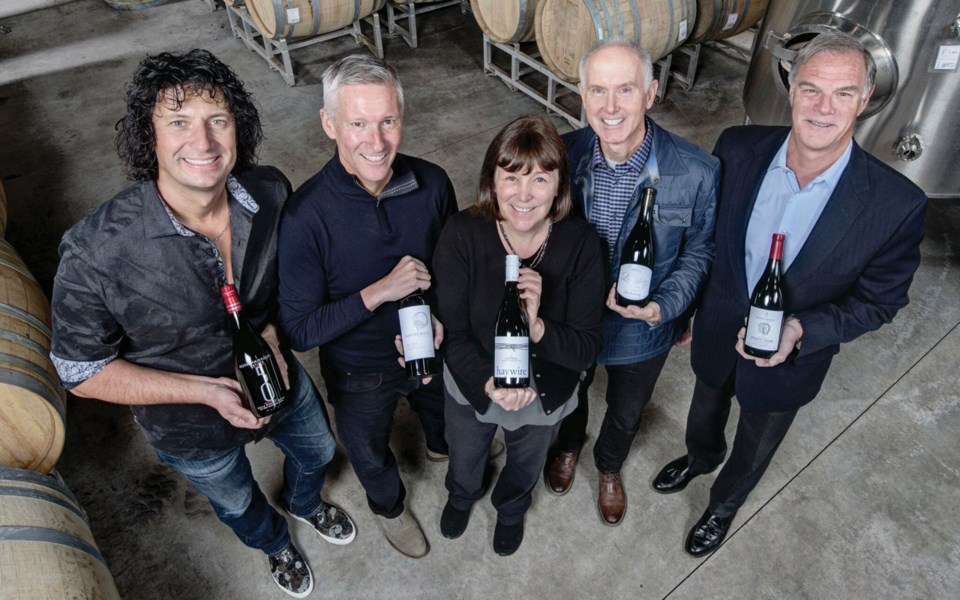 WINE'D UP The winemakers representing five B.C. wineries that have ushered a case challenging federal restrictions to interprovincial trade all the way up to the Supreme Court. Photo courtesy of uncorkBC

A handful of B.C. wineries have taken the fight over federal restrictions to interprovincial wine shipments all the way to Canada's highest court.

Five wineries representing a coalition of more than 100 B.C. wine producers were in Supreme Court last week arguing a constitutional challenge that could have major implications for the future of domestic trade and the Canadian wine industry as a whole.

The landmark case stems from an incident in 2012 when Gerard Comeau was stopped and fined for carrying beer he purchased in Quebec across the New Brunswick border. Comeau argued that the prohibition against transporting booze across provincial lines violated a section of Canada's Constitution Act of 1867 that promises the free trade of goods between provinces. Shockingly, Comeau won, and the case has made its way to Ottawa, attracting the attention and support of wine producers along the way.

"The way I look at it, I'm a Canadian citizen," said Comeau following his win in provincial court last year. "I don't see any reason why I can't go buy merchandise anywhere in this country and bring it home."

Canadians, by and large, appear to agree with Comeau. A recent Ipsos Public Affairs poll found that 89 per cent of Canadians feel they should be able to bring any legal product from one province to another. (In 2012, a private member's bill was passed in Parliament that makes it legal for Canadians to carry wine across provincial borders, however, each province still has the authority to set its own laws on the matter.)

The argument is a compelling one, particularly for a domestic wine industry that often has to work harder to sell its products to Canadians than to international buyers. By circumventing the hefty markups and additional taxes provinces impose at nearly every stage of a sale, local wineries claim they would be more profitable, and consumers would save more money while enjoying a greater variety of products if restrictions were laxed.

"I hope the Comeau Case will give the nearly 800 small wineries in this country the chance to share their farm-based products freely with all Canadians," said Ian Macdonald, owner of Liquidity Winery, in a release. Liquidity is one of the wineries serving as interveners in the case. "Direct to Consumer wine shipments are the norm in all other wine producing countries, and have proven essential for small winery economic viability."

"At this point it's very challenging to do anything in Ontario. We're not allowed to advertise and that means we can't promote the great wines of B.C. to Ontario consumers," he explained.

On the flipside, de Bruin said, B.C. is awash in wines from California, Australia and elsewhere, and yet it's rare to find Ontario wine on the shelves, creating an overly restrictive landscape left over from nearly a century ago.

Senior government is holding out hope that the court will uphold the Prohibition-era Gold Seal ruling of 1921, which defended what Andrew Potter, associate professor at the McGill Institute for the Study of Canada, called "an excessively narrow" ruling of Section 121 of the Constitution.

"It's surprising to see a country with as small an economy as Canada have these internal restrictions in 2017," said de Bruin, who is originally from the Netherlands. "The time is here to make sure that Canada has open and fair free trade, whether it's wine, beer, dairy or others."

This is the major argument from a B.C. wine sector with international ambitions: that by restricting trade between provinces, wineries don't have the same foundation that other wine hotbeds enjoy that has enabled them to make headway in the global market.

"Being on that (international) stage, it's so frustrating that we don't have the benefit of a home market, where France and Italy and California benefit from a huge domestic market they can serve, and use that as a stepping stone towards international exports," de Bruin said.

"If we want this industry to grow and become more mature, then a solid domestic market that is fair and accessible to all is a real must."

The five B.C. wineries serving as interveners in the case have spent roughly $70,000 of their own money so far in legal costs. They've asked all Canadian wineries to contribute whatever they can to help cover the legal fees.

Just over $64,000 has been raised to date through a crowdfunding campaign, which can be found at gofundme.com/Canadian-wine-for-all.