With big losses and its CEO stepping down, coffee chain needs to go back to its roots to regain Canadians' trust
Mar 14, 2020 2:00 AM By: Brandon Barrett 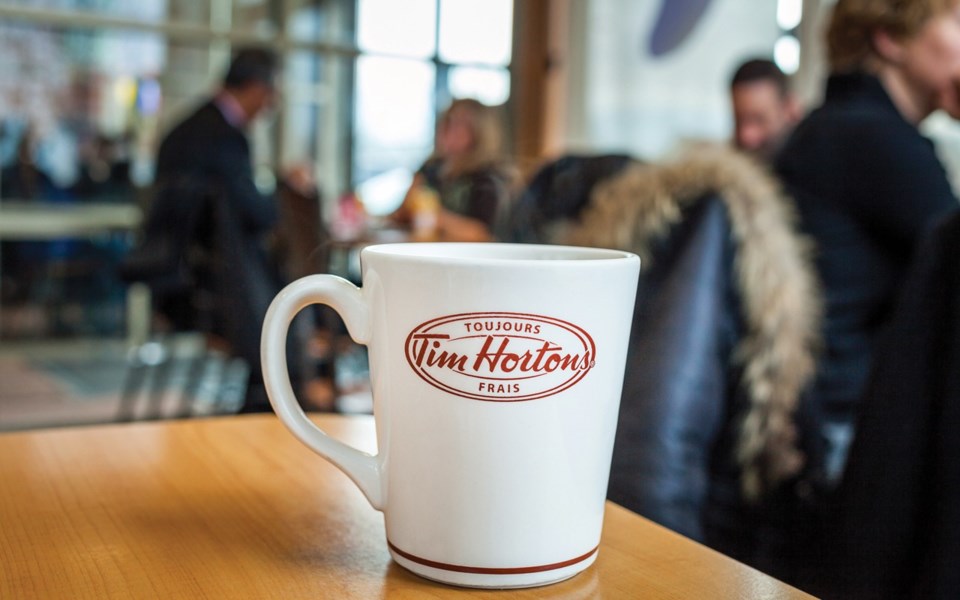 DOWNTURN In the past year alone, Tim Hortons has endured financial losses, promotional miscues and the departure of its CEO, signalling the downturn of one of Canada's most recognizable brands. Photo by Benoit Daoust / shutterstock.com

There is perhaps no brand more synonymous with Canada than Tim Hortons. Through a straightforward, unfussy menu, a plethora of community initiatives, and a savvy marketing strategy that played on national pride and nostalgia, over the years, the brown-and-red brand nestled into Canucks' consciousness in a way that few other companies could muster.

That played out back in 2015 when the coffee-and-doughnut chain added its first Whistler location to Creekside, quickly becoming one of Pique's most-read and commented-on stories of that year, all the more unlikely in a community that has historically favoured mom-and-pop shops to massive restaurant chains. But that consumer confidence appears to have eroded recently. After ranking fourth nationwide in Leger's 2017 list of Canada's most-admired companies, Timmies plummeted all the way to 50th the following year. And while it recovered somewhat in 2019's rankings, moving up 17 spots to 33rd, major earnings losses and a series of promotional miscues show that Tim Hortons still has a long way to go to regain Canadians' trust.

The issues began as early as 2014, when Burger King purchased Tim Hortons for a whopping (pun intended) US$11.4 billion before becoming a subsidiary of Restaurant Brands International (RBI), the fifth-largest fast-food operator in the world. It wasn't long before RBI set off a very public dispute with scores of franchises, many of which are family owned. At the heart of the matter was RBI's new efficiency-driven agenda, which called for, among other things, changes to the menu and its longstanding royalty structure. In the short term at least, the effort paid off, leading to a record high share price in late 2017.

But the emphasis on profit caught up with RBI in 2018, when a $15-an-hour minimum-wage campaign made Tim Hortons an easy target across the country. That was followed by the leaking of internal memos that suggested some employees in Ontario, where the minimum wage rose by 22 per cent that year, had been asked to pay for their own uniform and cut out breaks.

More recently, the restaurant chain has moved further away from its simplistic menu focusing on coffee and classic doughnuts made in house in favour of tepid lattes, pre-frozen baked goods, vegan meat alternatives, and a line of trendy sandwiches you'd be more apt to find in a hipster Gastown bistro than one of North America's largest restaurant chains. In fact, Tim Hortons' Beyond Meat campaign was so disastrous that it was abruptly pulled just months after its costly national rollout; all the more remarkable when you consider Beyond Meat has been a boon to pretty much every other brand it has associated with, like A&W, which has seen its profits climb since adding the plant-based burger to its menu in 2018.

Add in a recent tone-deaf tweet from Tim Hortons offering free coffee for life to Prince Harry and Duchess of Sussex Meghan Markle if they moved to Canada, or an outdated Roll Up the Rim campaign that contributes to the company being the country's second-biggest corporate polluter, and it's clear that RBI doesn't seem to understand its own brand.

Whatever the solution, it's clear that RBI needs to refocus. Tim Hortons CEO Alex Macedo is stepping down this month, after the company's profits were down 1.4 per cent last quarter, a staggering loss for a company of its size, especially considering revenues were up considerably at RBI's other restaurants, Burger King and Popeye's.

The reality is Tim Hortons' customers aren't looking for all the bells and whistles of its competitors, but a back-to-basics approach that speaks to the company's previous commitment to uncomplicated, quality food and a longstanding emphasis on giving back to the communities it serves.

As National Post writer Calum Marsh put it in a January column, "What might fix Tim Hortons, what might repair the damage to its reputation inflicted by novelties like its lattes and meat-alternative lunches, is a new emphasis on the fundamentals, a return to the very virtues which first made Canadians cherish the coffee and donut chain."