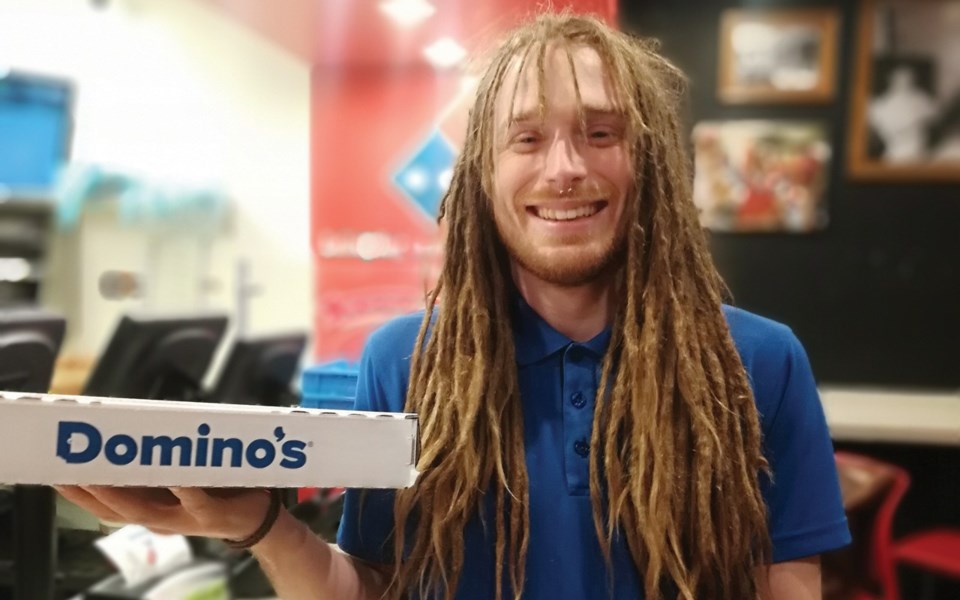 let's make a deal Domino's Whistler employee Yann Tassé got tired of eating the same staff lunch everyday, prompting him to create Whistler Food Swap, which connects local workers so they can trade meals on their lunch breaks. Photo submitted

It's the dream of every famished pre-pubescent teen jacked up on Orange Crush and Nintendo: Pizza for lunch. Every. Single. Day. But, as it turns out, it is possible to have too much of a good thing.

It's a lesson Whistlerite Yann Tassé has learned while working at Domino's Whistler, crushing the hopes and dreams of greasy-fingered youth the world over.

"At Domino's, we get a small personal pizza or cheesy bread as staff meals," said Tassé. "I hate to say it, but it gets old." This seemingly endless supply of cheesy bread is what prompted Tassé to launch Whistler Food Swap two years ago. Tired of the same old staff lunch day in and day out, he created the Facebook group with the goal of connecting local workers so they could trade grub on their lunch breaks.

"When you work in a restaurant, no matter how good the food is, after a while, you just get sick of it," he said. "I just thought that, in Whistler, being such a small place, there would be lots of restaurants close to each other, so it would be great to have a place where we can post and share meals."

The group had only attracted a few dozen members soon after being launched; it wasn't until Tassé posted to the (much, much larger) Whistler Winter page about a month ago that it ballooned to its current 260-plus membership.

"Since then, pretty much every day people are posting and trading meals," Tassé said. "I'm pretty stoked on that."

Of course, not all staff meals are created equal, something Tassé and his fellow staff are well aware of. Scrolling back through the posts, it's rare for a week to go by without Tassé pleading for someone to trade for his chainstore 'za.

"You probably wouldn't want Domino's," he wrote to a fellow pizza pusher from Creekbread. "You're probably not wrong but stranger things have happened," came the reply.

Just last week, Tassé swapped for a generous serving of ribs, poutine and coleslaw from 3 Below, and it wasn't long after he dug in to his meal that he began to feel a twinge of guilt.

"It was the greatest meal I've had in such a long time," he said. "It was food for two people."

But, like he always does, Tassé texted after the swap to make sure they were satisfied with the meal. She loved her personal pan pizza. "I was super stoked that we were both happy about it," he added.

In that way, Tassé sees the food swap as more than just a means to shake up a staff meal, but a way to forge relationships with the other overworked, underpaid Whistler worker bees.

"When I trade with a restaurant for the first time, I always make sure to bring more food to make a good connection and make people happy so they will trade again," he said.

Tassé said he'd like to see Whistler Food Swap expand outside of the village into Creekside, where there are a handful of restaurants in close proximity. He's also considered the option of launching the service as an app—but needs someone with the technical know-how to help.

"I have no idea where I would start nor the resources, but I'd be glad to see this become a thing and be part of it if anyone has more [knowledge] and resources," he said.

In the meantime, I think I'm gonna go get me some cheesy bread. To learn more, or to join the group, search for Whistler Food Swap on Facebook.