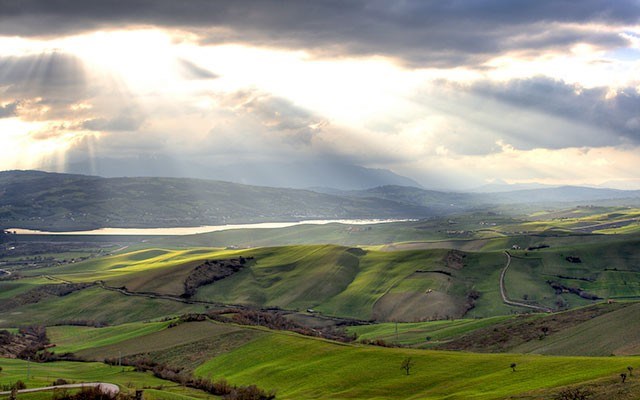 DIAMOND IN THE ROUGH Vinosia Winery sits in a fertile swath of land in Campania, Italy, and produces a number of fine wines that have wowed Whistler sommeliers. Photo submitted

When it comes to wines, it's not often you can stump a Whistler sommelier.

But that's exactly what happened when Mariella Zangaro of Vinosia Winery toured a number of resort restaurants and liquor stores this week with a selection of wines made from an obscure southern Italian grape called Aglianico.

"Aglianico is a kind of mysterious grape," said Zangaro, "and actually the only grape that has almost nothing in common with other grapes."

Whistler-based wine rep Jared Curnew elaborated further. "These are people who are very into wine and it's certainly a big part of their lives, and they were reasonably unfamiliar with most of the grapes in this portfolio — the main one being Aglianico," he said. "They were blown away. It was a really fun day because everybody I presented these wines to was really stoked on the flavours, the price points, the versatility of the grape."

Vinosia, located in the Irpinia region of Campania, makes wines from local varietals like Aglianico, Falanghina and Greco di Tufo.

When most people think of Campania, images of sun-swept Mediterranean shores dance in the mind, but Vinosia sits inland on a bed of fertile volcanic soil, with a continental climate and heavy rains throughout the year, giving the grapes their characteristics that are distinct from the better known Italian varietals.

"Travelling the world, sometimes it happens that people look just for what is well known," Zangaro said. "I love so many different wines — everyone loves Barola and Sangiovese — but sometimes it's difficult to have people be curious about something that is different and not well known."

The Aglianico, in particular, is super versatile; Vinosia produces several different wines from this one grape alone based on how it's harvested and aged.

The response from local wine experts has been very positive, to say the least.

"For the price I pay for wines of that quality, they are few and far between," said Nesters Liquor Store manager Dave Brownridge. "They're world-class wines from a world-class grape that is a little bit undiscovered."

Part of the problem, Curnew explained, is that consumers aren't likely to choose a label they're not already familiar with, resorting instead to the timeworn classics.

"Pretty much the majority of the product that comes here is mass-produced and fits those buzz words that everybody knows: Chianti, Barolo, Sangiovese, Montepulciano — those kind of grapes," he said. "Heaven forbid Sideways 2 came out and they talk about Aglianico. The landscape would change."

Given the abundance of quality ingredients and wide range of different cuisines found here, Zangaro said British Columbia should be a prime market for hard-to-find Italian wines.

"It's a little bit difficult here in Canada and B.C., maybe because of the monopoly and because as Italian producers we (focus) on the States," she said. "But I think you are completely ready and enthusiastic to receive wines that you sometimes hear about and don't have the opportunity to taste here in B.C."

Vinosia wines will be available for sale shortly in Whistler at Nesters Liquor Store, Hy's Steakhouse, Quattro and Il Trattoria di Umberto when it reopens in the winter.